Hanging out with Jesse and his/her friends

To destroy the Wither Storm(s) (succeeded)

Reuben is one of the protagonists in Season 1 of Minecraft: Story Mode. He is Jesse's pet pig. He is voiced by Dee Bradley Baker.

Reuben appeared to be a regular Minecraft pig with bigger eyes and eyebrows. He also had a brown mark on his body.

Reuben is kind, caring, smart and very loyal to Jesse. He is quite intelligent for a pig, understanding and responding to what other characters say. He is also quite feisty and very protective of Jesse, attacking people if they try to harm him/her.

Despite his small size, he is capable of defending himself. This is shown when he is caught by a butcher called Otis who wanted to cook him. Despite Otis wielding a stone axe, if Jesse does nothing to help him, Reuben will outright attack Otis and leave him supposedly lying on the floor while Jesse looks on in shock.

Reuben is also quite caring, sweet and generous, as shown when Axel give out cookies to all his teammates (including Reuben) but doesn't have one for Lukas. If Jesse doesn't give Lukas his/her cookie, Reuben will give his cookie to him, also showing that he, unlike Axel, had already accepted Lukas into their group, despite him being leader of the Ocelots, who are rivals to Jesse's Gang that (aside from Lukas) routinely taunt and make fun of them.

Reuben is courageous, attacking/threatening enemies that are bigger and stronger than him if they threaten Jesse. His courage is also shown in Episode 4 when Jesse is about to be sent inside the Wither Storm to destroy the Command Block controlling it, Reuben jumps into Jesse's arms, much to his/her protests and ends up inside the Storm with him/her. His courage is shown once more when Jesse is hanging upside down held by one of the Storm's tentacles and he/she drops his/her weapon. Jesse asks Reuben for help, reminding him of how they played fetch, and Reuben grabs Jesse's weapon in his mouth and climbs up to Jesse, giving his/her weapon back and in turn, helping Jesse destroy the Command Block and save the world, an action that would ultimately cost his life.

Like many characters in the series, not much is known about Reuben's backstory. It can be assumed that he was once a wild pig until he met Jesse near a waterfall and was tamed and adopted by him.

When the game starts, Reuben lives in a treehouse with his owner, Jesse and his friends, Olivia and Axel.

Reuben with the rest of Jesse's Gang and Petra in the game's cover art. 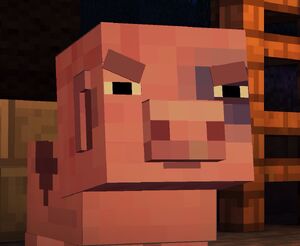 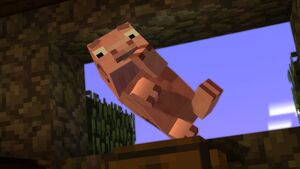 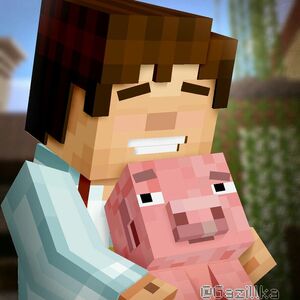 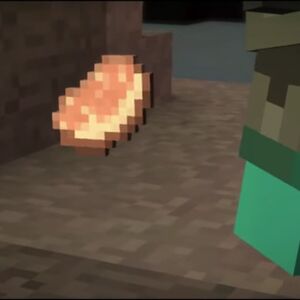 Reuben remains after his death.