Can cure EVOs with his Nanites

Can generate his body into weapons such as fists, swords, cannons and a bike, extreme tolerance for pain and resilience
Super strength
Regeneration

Stop Van Kleis before he recreates the Event (succedded).

Discover what happened in his mysterious Past (succeeded).
Cure every EVO in the world (succeeded).
Defeat Black Knight and the corrupt Providence (succeeded).

Rex Salazar is the main protagonist of the series, Generator Rex. He is capable of creating machines protruding from his body using machines that are capable of transmogrifying any form of matter called Nanites. He started as a child who was inflicted with a fatal disease, and the only way his parents could cure him was to use experimental-stage Nanites. They cured him, but they also inadvertently caused a chain reaction called The Event. Rex's parents were killed in the blast, and Rex himself along with almost half the planet was turned into what would be eventually called an E.V.O. Over the years, he made allies with a self-concerned man named White Knight and an organization he started called Providence with hopes that he would be able to gather the pieces of his memory The Event scattered to the winds. Within Providence, he was under the mentorship of a mysterious man named Agent Six, developed a crush on a slightly older woman named Dr. Holiday, and made friends with a chimpanzee E.V.O. named Bobo Haha and a human named Noah Nixon (Noah was secretly working for White Knight acting as his spy, but Rex eventually found out.) However, Rex also made very dangerous enemies, such as Van Kleiss (who knew almost everything about Rex's past due to the fact that he caused The Event), Quarry (Rex's first enemy), and White Knight's darker, younger, and more feminine counterpart, Black Knight. It was during his war with Black Knight that he discovered that there were more powerful Nanite models than the ones coursing through his veins called Meta-Nanites which, if evil forces were allowed to control them, can tear apart the universe. Eventually, he learned that his parents designed them and intended them for Rex and no one else. Finally, he cured every E.V.O. on Earth once he got all the Meta-Nanites together at last. He was last seen at the ready when Providence alerted him that a mad scientist was attacking a city with a giant robot.

He is voiced by Daryl Sabara who is also notable for the portrayal of Juni Cortez of Spy Kids movie series. And by the late Japanese Dub, he voiced by Showtaro Morikubo who also voice Shikamaru from Naruto franchise.

Like most teenagers who grow up secluded and isolated, Rex is overconfident, impulsive, and rebellious. He is quite headstrong, which according to Van Kleiss, he inherited from his mother, Violeta. He has a quick wit and is constantly making jokes, even in the direst of situations, often falling into sarcasm. However, when Rex needs to defend himself, he does not hold back. Aggressive and reckless, Rex prefers to smash anything that gets in his way, much to Providence's annoyance. However, he eventually begins to show more discretion and consideration. Rex has also shown a selfless side to his personality, as he takes pride in curing many EVOs at his own risk. He has also shown an empathetic side to his personality, for instance, he understands that many of the EVOs he encounters were previously conscious people who still have loved ones concerned about them, and never resorts to execution no matter the species. Another example would be when Rex was the only one to see things from both Agent Six's and Serge's opposing point of views when discussing Aquania.

Like any teen, Rex also faces tough and conflicting feelings about his situations, like his position at Providence. While he is loyal to the organization, sometimes the pressure of being the only person that can cure EVOs becomes too much for him to handle. Consequently, he sometimes breaks out of the base to go on "road trips", as he calls them, to blow off steam. However, he always returns, perhaps out of a sense of duty, purpose, and caring for his team. He also tends to be sympathetic towards others in similar situations, namingly Circe and Breach. For instance, although Circe was than willingly joined the Pack, he understood her confusion and its relation of being an EVO and her hesitance behind joining Providence. When Breach was torn on her treatment by Van Kleiss and the Pack, Rex reached out to her to lend a helping hand, remedying her with the same tactics he used on himself. Ultimately, he never gave up on them.

Rex has also been shown to be clever. For example, Tuck stated that Rex improvised the voice activated nano-ink tattoos that Rex, Tuck, Skwydd, and Cricket have, after a problem they had with an EVO that could shape-shift. Coming from a family of scientists, Rex is quite intelligent, as shown when he was able to take high school courses with ease. After taking a trigonometry pop quiz, Rex casually told Noah that it was "just trig" and explained that it was like aiming his cannon. Another trait that goes hand in hand with Rex's cleverness and wit is Rex's ability to manipulate his enemies. At one point Rex willingly tricked Van Kleiss by fighting NoFace, knowing that Van Kleiss needed him alive, while NoFace wanted him dead. However, due to the circumstances, Rex pretended to lie unconscious while Van Kleiss and NoFace fought each other for Rex's life. He also used Biowulf's insecurities and fear of being replaced by NoFace to persuade Biowulf's assistance in the long run. 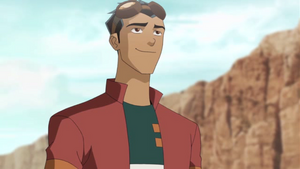 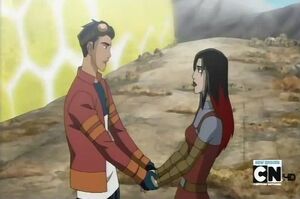 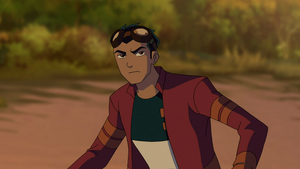 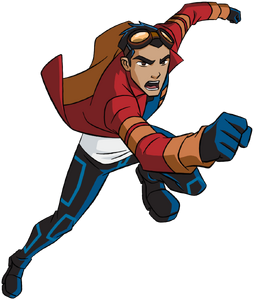