Rolling his right arm, Hanging out with Shulk

Defeat Egil, the Mechon and Zanza

Reyn is one of the seven main protagonists and playable characters (alongside Shulk, Dunban, Fiora, Sharla, Melia Antiqua and Riki) in the video game Xenoblade Chronicles. He is Shulk's best friend from childhood and a member of the Colony 9 Defence Force. He is also the first person (apart from Shulk himself, of course) to join the party permanently.

He is voiced by Eiji Miyashita in the Japanese version and Jay Taylor in the English version, the former of whom also voices Gen Shishio.

Reyn is an 18-year-old soldier from Colony 9's Defense Force, and is a childhood friend of Shulk and Fiora. Despite his position as a soldier, Reyn is the stereotypical fun-loving joker of the group, and is often seen with his friends. Throughout the game Reyn attempts to support and encourage Shulk, asking him to confide in him, and generally pushes Shulk to recognise his potential. He uses an oversized shield-gunlance, which can switch from shield mode into gun or lance mode.

Reyn is an emotional fighter whose self-appointed job is to protect his friends no matter what. He views himself as the one who should be taking hits so others don't have to, both on and off the battlefield, and tries to inject a positive attitude into almost any situation. He is not very clever and loses his temper a lot, but he is fully aware of this, and openly welcomes that others do the thinking for him. He might be constantly trying to get Shulk to see his side of a situation, but once Shulk makes a decision, he never questions it. Overall, he is proud of who he is including his shortcomings. 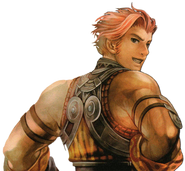 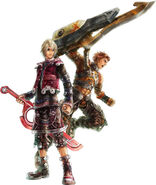