Rhea
The Immaculate One

Patron deity of Fodlan
Archbishop of the Church of Seiros

Use Byleth as a vessel of her mother, Sothis.
Revive her mother.
Protect Fódlan from Those Who Slither in the Dark (succeeded)
Kill Byleth and Edelgard (Crimson Flower; failed)

Seiros, also known as Rhea and the Immaculate One, is a major supporting character in Fire Emblem: Three Houses, serving as the founder, patron deity and Archbishop of the Church of Seiros.

However, she becomes the main antagonist of Crimson Flower, due to her obession of killing Byleth when they choose to defy her and side with Edelgard. (who was revealed to be the Flame Emperor) Because of this, Seiros can be considered as one of the two secondary antagonists (alongside the Flame Emperor) in the overall game.

She is voiced by Kikuko Inoue in the Japanese version and by Cherami Leigh in the English version she voiced both Mae and Caeda in the same series and Ilia Amitola from RWBY.

Seiros is the founder of the Church of Seiros, which named after her. It is said she received a revelation from the Goddess that was a "gift to guide the lost." However, the myth of the Church is a deliberate partial distortion of real history. Seiros was not a normal human in fact, but a member of the Nabatean race, the children of the Goddess Sothis, who lived in Zanado, the Red Canyon, before Sothis was betrayed and murdered by Nemesis, a former guardian of Seiros who became a bandit after being corrupted by Those Who Slither in the Dark. Those Who Slither in the Dark forged the Sword of the Creator from Sothis' bones, which Nemesis then used to commit genocide against the Nabateans, whose bones were also forged into weapons by Those Who Slither in the Dark.

Traumatized and embittered, Seiros became distrustful and vengeful towards humans, blaming Nemesis' hunger for power and subsequent treachery for a consequence out of human nature. She became obsessed with reviving Sothis and returning the happiness of her childhood.

In Imperial Year 91, Seiros went to get revenge on Nemesis. She, along with Wilhelm (one of Nemesis' former allies) and the survivors of the Red Canyon, the Four Saints, Seiros led the battle against Nemesis and the Ten Elites, killing him in hand-in-hand combat at the Tailtean Plains.

After the War of Heroes, Seiros founded the Church and created the Adrestian Empire, crowning Wilhelm as its first emperor. She then rewrote history, claiming that the Crests were gifts from the Goddess to humanity, that the Ten Elites were her devout followers, obscuring Nemesis' original past and only leaving intact that he was a hero who fell from grace. She also claimed that the weapons forged from Nabatean bones were "Heroes' Relics" gifted to humanity by the goddess, in order the hide their true nature from the people.

After the establishment of the Church, Seiros began her endeavor to revive Sothis, using the Church to control Fódlan from the shadows, eliminating any who would oppose her.

Since Nabateans have a longer life span than humans, Seiros faked her death and continued to control the Church under the name Rhea. As Rhea had shared her blood with a man named Jeralt Reus Eisner to save his life, she also used the Crest of Flames to revive a newly born child named Byleth Eisner, implanting its Crest Stone in their heart when they were a baby. Rhea believed that Byleth would be the perfect vessel for Sothis.

Jeralt grew suspicious of Rhea due to the circumstances of his wife's death and Byleth's condition, who had a pulse but no heartbeat and never cried or laughed. Losing his faith in Rhea after believing his wife, Sitri, died of something else, Jeralt faked his and Byleth's deaths and left the Knights of Seiros with his child, though he was later forced to return many years later after being discovered by Dimitri, Edelgard, Claude and Alois. In the years following Jeralt's disappearance, two of the Four Saints, Cichol and his daughter Cethleann, joined Rhea at Garreg Mach Monastary, taking the names Seteth and Flayn respectively and masquerading as brother and sister.

In the aftermath of the Fall of Garreg Mach Monastery, Rhea is captured by the Adrestian Empire, forcing the Knights of Seiros to join Byleth's forces to rescue her. After Edelgard's death, Rhea is found alive but severely weakened. She steps down to live in seclusion in Zanado and entrusts her role as the archbishop of the Church of Seiros to Byleth.

When the Alliance defeats Edelgard and takes Enbarr, Rhea is found alive but seriously weakened. Claude urges Rhea angrily to tell him and Byleth all her secrets, but Rhea does not answer them immediately.

Rhea then accompanies Byleth and Claude as they travel to Shambhala and defeat Thales, the leader of Those Who Slither in the Dark. However, Rhea becomes gravely injured when she attempted to protect Byleth from Agarthan missiles in her dragon form. This leads Claude to recognize she is the Immaculate One. In an even worse condition than before, she decides to reveal everything that she knows, and tells Byleth and Claude that she is Seiros, the goddess Sothis, Agarthans, Nemesis, the Ten Elites, and the origins of Crests and Heroes Relics. Her fate in this route is left ambiguous, although considering her earlier claim of not having much time left during said exchange, and Catherine's S-Support stating she has nowhere to go, it is implied that she died shortly afterwards.

Rhea acts as the deuteragonist (and final boss after she loses control of her powers) of Silver Snow, though her role is nearly identical to her role in Verdant Wind. In Silver Snow, Rhea reveals the truth about Byleth and apologizes to them, before her powers turn her berserk and transforms into the Immaculate One. She then flies off to Garreg Mach with several White Beasts and frenzied Church soldiers, prompting Byleth and the others to battle her to stop her and her "children" from rampaging across Fódlan. They are able to defeat her, despite the discovery of a "second" form, and she crash-lands into the cathedral, where Byleth catches up. Rhea assumes them to be Sothis as she dies from her injuries. If Byleth has obtained an A-rank support with Rhea, she will survive, where she decides to step down and has Byleth replace her as the archbishop of the Church of Seiros, before living in seclusion at Zanado. If Byleth obtains an S-rank support with her, she returns to her position after recovering and works with Byleth as her mate to bring peace to Fódlan.

See Seiros on Villains Wiki for her Crimson Flower counterpart. 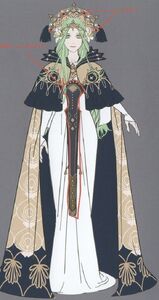 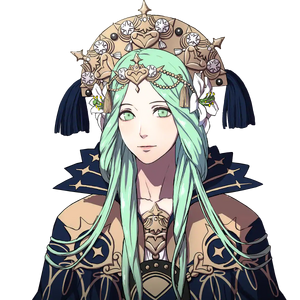 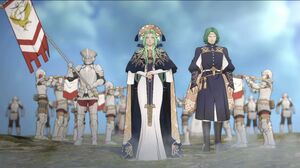 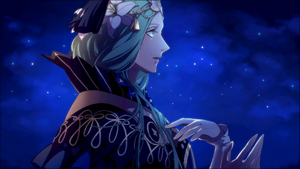 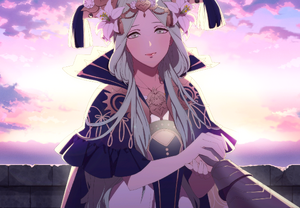 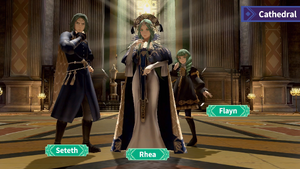 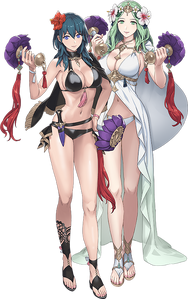 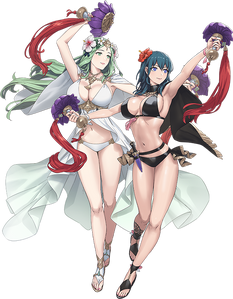 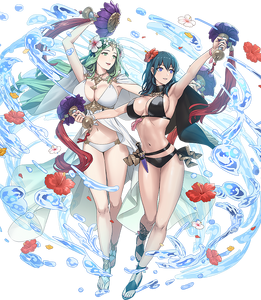 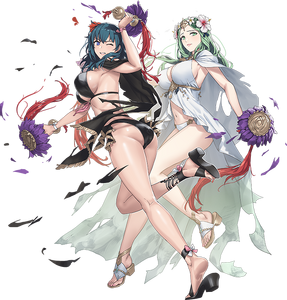 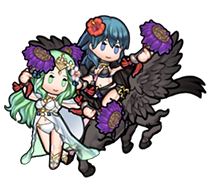 Byleth (Female) and Rhea's sprites from Fire Emblem Heroes.
Add a photo to this gallery

Retrieved from "https://hero.fandom.com/wiki/Rhea_(Fire_Emblem)?oldid=2314417"
Community content is available under CC-BY-SA unless otherwise noted.