Member of the Nova Corps

Spending time with his wife and daughter.

Protect Xandar against Ronan and the Dark Aester (succeeded).

Rhomann Dey is a major protagonist in the 2014 superhero movie, Guardians of the Galaxy. He is a member of the Nova Corps and works mantaining the law in the Nova Empire, espicifically for him, Xandar, capital of the empire. His job led him to conflicts against the Guardians of the Galaxy, before becoming a ally and friend of them after their redemption, and helped them in the battle of Xandar against Ronan and the Kree Empire.

He is portrayed by John C. Reilly.

He is a Xandarian man who has a wife and a daughter, and became an official at the Nova Corps sometime. He works as a officer around the empire, and even met and arrested Peter Quill once.

He arrests Peter Quill, along with Rocket Raccoon, Gamora and Groot when they were in a public place, and sent them to the prison of Kyln, after examining them and explaining their crimes to Garthan Saal. While he was against senting them to Kyln, because he though the place was too violent to them, Saal assured that normal prisons wouldn't hold them, but Kyln would.

Dey, before the events of the Battle for Xandar, had a conversation with his superior, Irani Rael, and was the motive she let the Guardians help them against Ronan, because Dey assured her that he though they were there to help. During the battle, Dey was piloting a Star Blaster along with other officials from Nova Corps and taking down some enemy ships, until Irani told them to form a blocket against Ronan's ship, the Dark Aester. Dey along with the others did so, and created an energy blocket by organizing their Star Blasters. However, after some minutes, the Dark Aester overpowered the blocket and passed through it, resulting in death for many Nova Corps members, including Dey's friend, Garthan Saal, but not for Dey himself.

After the Guardians won the battle, Dey presented them with a new ship, and thanked them for saving the planet, also saying to them to stay in line. After that, he'd return home and happily hug his wife and daughter, now that the planet was safe again. 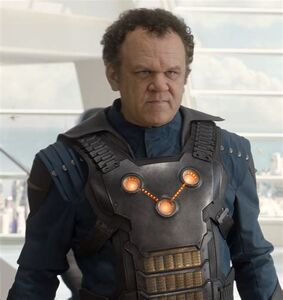