Playing around in the gardens
Drawing
Daydreaming

Ribbon (リボン (Ribon) is one of Kirby's friends as well as a presumed love interest, making her debut appearance in Kirby 64: The Crystal Shards. She later returns alongside Adeleine in Kirby Star Allies.

Ribbon is rather complex in her personality, and she is initially portrayed as playful but is also determined to save her home.

Ribbon is a fairy from the planet Ripple Star who journeys with Kirby to defeat the invading Dark Matter and gather the pieces of the Crystal that the Dark Matter broke apart. Ribbon is one of the only characters in the games to have any sort of indicated romantic interactions with Kirby. She returns in Kirby Star Allies.

Ribbon is a small fairy with pink hair, a red ribbon in it, blue eyes, wears a long-sleeved red dress, with yellow buttons, a frilly white collar. Her pants are white and she has small beige shoes.

Ribbon resides on the heart-shaped planet, Ripple Star. When the Dark Matter use a cloud of darkness to take over her home, she rushes to the castle to alert the Queen Fairy. The queen then tells her to take the Crystal and safely escape from Ripple Star. Ribbon then grabs the Crystal and flies away, but is tailed by three Dark Matters. The three attack the fairy and shatter the Crystal into at least 72 shards which are scattered across the solar system. Ribbon then crashes onto Planet Popstar, right on top of our star-gazing hero, Kirby.

He sees that a piece of the crystal on the ground is the same as the one Ribbon has, and offers to help her restore Ripple Star to its former glory, and the two set out to find the rest of the Crystal Shards. Along the way, the duo encounters three inhabitants of Popstar who have found Crystal Shards and have been possessed by Dark Matter --Waddle Dee, Adeleine and King Dedede. After freeing them, the three then agree to join Ribbon and Kirby save Ripple Star.

Eventually, the team of heroes reaches Ripple Star only to find that it has been almost entirely been covered in darkness while they were finding the Shards. Eventually, Kirby reaches the top of Ripple Star's grand castle and encounter Miracle Matter - the apparent cause of the Dark's Matter's appearance on Ripple Star. After a long battle, Kirby manages to defeat it. However, while all of the visible Dark Matter has left Ripple Star, an abnormally powerful presence resides within the Queen Fairy. Once the gang has found all of the Crystal Shards, a beam is shot from the completed Crystal at the Queen Fairy, freeing her from its evil grasp. The remaining Dark Matter then leaves the atmosphere and, in a last-ditch effort to salvage its plans, forms a foreboding giant planet known as the Dark Star nearby. Once they arrive at the core, Ribbon carries Kirby, allowing the player to fly freely during the battle against the real villain, 02. After Kirby and the group defeat 02, the threat is over and the band of heroes returns to Ripple Star. There, they are given crystal medals of honor. Ribbon gives Kirby a kiss on the cheek, Kirby blushes profusely and then bashfully dances in a stupor as he accidentally crashes the ceremony.

She later returns Kirby: Star Allies as a dream friend.

Ribbon appears Super Kirby Clash as a background character, as she watches while Adeleine paints pictures. 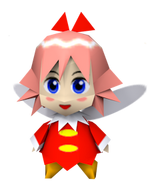 Kirkby gets kissed by Ribbon 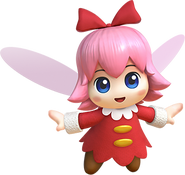 Ribbon in Kirby Star Allies
Add a photo to this gallery

Retrieved from "https://hero.fandom.com/wiki/Ribbon_(Kirby)?oldid=2125212"
Community content is available under CC-BY-SA unless otherwise noted.