Richard Miller is the main lead protagonist from the Time Crisis series.

Richard Miller was born in 1964. He was the male lead character in Time crisis. In the game, he is known as "the one-man army" by the V.S.S.E. They send him in to rescue Rachel, the president's daughter when she was kidnapped by Wild Dog. He was insructed to kill all he sees, rescue Rachel, invade the castle and escape. He ended his mission by killing the security commanders, rescuing Rachel and was thought to have killed Wild Dog, who was behind the whole plot, he serves as a key to the further future in the game.

Richard appears in the second game as the final boss of the Crisis Mission portion of the game. He is the final target of the Crisis mission and must be defeated in order to clear the mission. In battle his title of "the one-man army" is well displayed, most of his shots are bullets that hit dead on and must be avoided.

After the Hamelin Battalion's uprising crisis was thwarted, the events are used as the basis for the Crisis Mission training portion of the game. Being used to train new agents, Richard Miller takes the mantle of Wild Dog in a faux-Wild Dog-like costume into battle as the final test of the game. After defeating both Evan Bernard and Giorgio Bruno, the new agent has to take on what appears to be Wild Dog, only to find out after the battle that it was Richard in disguise. As Wild Dog he uses the same weapons and equipment the real Wild Dog used, such as the trap wall and the tractor beam. After the battle Richard congratulates the new agents or trainees and declares that they too will have to face or challenge Wild Dog in real battle for the next future. 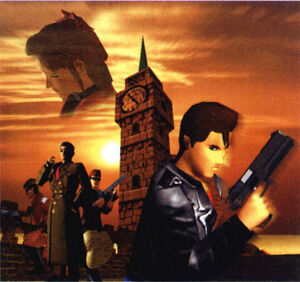 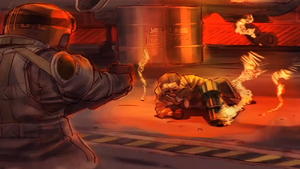 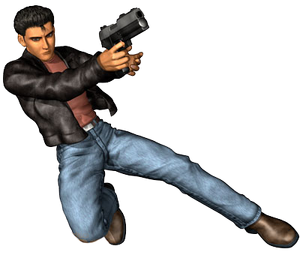 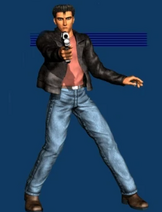 Retrieved from "https://hero.fandom.com/wiki/Richard_Miller_(Time_Crisis)?oldid=1872288"
Community content is available under CC-BY-SA unless otherwise noted.