Richelieu is a character and one of the heroes from the Kantai Collection series who was implimented into the game on the 10th of August, 2017.

She is the Fleet Girl form of the French Battleship Princess.

She is voiced by Tanibe Yumi and drawn by Akira.

Richelieu was a French fast battleship, the lead ship of the Richelieu class. Built as a response to the Italian Littorio class, the Richelieus were based on their immediate predecessors of the Dunkerque class with the same unconventional arrangement that grouped their main battery forward in two quadruple gun turrets.

Richelieu was laid down in 1935 and was launched in 1939, just before the outbreak of World War II in Europe. Completed just days before the Germans won the Battle of France in June, Richelieu fled to Dakar in French West Africa to keep her under French control. There, she came under repeated British attacks that had been intended to either compel the battleship to join the Free French Naval Forces or sink her; these included during Operation Catapult in July 1940 and the Battle of Dakar in September. Damaged in both attacks, the ship was slowly repaired before eventually turning over to Free French control after the Allied invasion of North Africa in November 1942. After being sent to the United States for repairs and an extensive modernization, the ship served with the British Home Fleet in early 1944 before being deployed to the Eastern Fleet for operations against the Japanese in the Indian Ocean, though she was too far away to engage the Japanese ships before they were sunk.

Richelieu was part of the force that liberated Singapore following the Japanese surrender in September, and she thereafter operated in French Indochina as part of the initial effort to restore French colonial rule. Recalled to France in December 1945, she was repaired and modernized slightly in 1946. The ship saw relatively limited peacetime training in the immediate postwar years and in 1952, she was removed from active service for use as a gunnery training ship. In 1956, she was placed in reserve and was thereafter used as a stationary training vessel and barracks ship until 1967, when the French Navy decided to discard her. Sold for scrap in 1968, she was broken up in Italy from 1968 to 1969.

Richelieu has a pale skin, a very long, light blonde wavy hair and a swept bangs along with a small piece of hair hanging between her eyes. Her eyes were (supposed to be) light grey and sometimes has a bit of greenish color. Richelieu also has two moles on her face, which is located under her left eye and under her lips.

Her costumes including a huge, loose white beret with a red pom-pom accesory on top and a long black ribbon placed behind her beret, a very long grey-black-red squared-motif scarf, a piece of black-white-grey dress, a large white belt surrounded under her breasts, a pair of black-white gloves, a tricolore scarf tied on her left arm, a pair of black-white stockings, and a pair of loafers with a gold anchor accesories on top.

Her appearance bears a striking resemblance to Commandant Teste due to her hair and wearing French Navy beret. 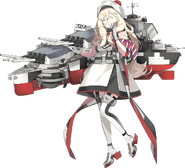 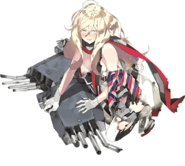 Richelieu and Commandant Teste, as seen in the Kantai Collection - Official Calendar 2018

Richelieu, as seen in the Kantai Collection - Official Calendar 2020
Add a photo to this gallery
Retrieved from "https://hero.fandom.com/wiki/Richelieu?oldid=1760970"
Community content is available under CC-BY-SA unless otherwise noted.