Having their arguments/or fighting each other.
Trying to find love

Richie & Eddie were the two main protagonists from the 1991-1995 show Bottom, it's stage shows and it's 1999 film spin-off, Guest House Paradiso.

They are two unemployed men who have been friends for 25 years and share a flat in Hammersmith in London. Most episodes would feature them trying to earn money or trying to attract women, but end in failure.

Richard "Richie" Richard is a perpetually optimistic dimwit, while Edward "Eddie" Elizabeth Hitler is a cheerfully violent dipsomaniac. Their arguments often lead to exaggerated, destructive fight scenes. Some have likened this to a live action cartoon. However, the boisterousness is somewhat more graphic: examples include heads slammed in and under refrigerators; hands stapled to tables; legs being chainsawed off; genitalia slammed in doors or set on fire; fingers cut off; televisions smashed over heads; darts, forks, or fingers ending up in eyes; faces shoved in camp fires; legs broken or teeth knocked out.

Some of the visual effects used for these events are very realistic, whereas others are deliberately fake. All are accompanied by a variety of over-the-top sound effects. The BBFC has given the Bottom: The Complete Series DVD a classification of 15, with a violence rating of "None". Richie is known to be a virgin (Eddie stole Richie's only ever "girlfriend", Ethel Cardew, and sometimes torments Richie with how he had sex with her), with a microscopic penis (which he sometimes mistakes for his only pube). However in the episode 'Digger' he almost has sex with an allegedly wealthy foreign countess, Lady Natasha Letitia Sarah Jane Wellesley Obstromsky Ponsonsky Smythe Smythe Smythe Smythe Smythe Oblomov Boblomov Dob, after he and Eddie join a dating agency.

Natasha agrees to marry Richie, much to his delight and he is totally oblivious to the fact that she is marrying him because she thinks he is a millionaire and she has lost her entire fortune. Towards the end of the episode, as Richie moves in to have sex with Lady Natasha he has an apparent heart attack, and is rushed to hospital. Whilst waiting for the ambulance, Eddie claims to have had sex with Lady Natasha, as he did Ethel (although in the episode 'Terror' in season three, Eddie looks distinctly nervous when he claims that the Devil drinks virgin's blood).

Richard also tends to believe that any woman who does not fancy him must be a lesbian. He is also unsure of the decade, claiming in the same episode (Carnival), that it is both the 80s and then 70s later on- with a bemused Eddie looking to the camera after Richie mentions it's the 80s after all. Richie usually wears a white shirt (tucked into his Y-fronts) and slim black tie (with tie clip), blue jeans (with a belt that clearly misses most of the loops) and has a light brown raincoat when outdoors. He also occasionally wears brown trousers, held up with braces, and a red tie. His character is aspirational, pretentious, and occasionally a snob. Eddie is a cheerfully violent alcoholic (he claims that this is because he "drinks a lot"). He wears glasses akin to those of Eric Morecambe, a brown suit and a white shirt with a black spotted tie (Which he tucks inside his trousers) on closer inspection one can see that Eddie's suit jacket and trousers have several stains and frays.

Despite having a shaven head, he sports sideburns. He also has a brown trilby hat and a tweed coat. He seems to have quite a wide circle of friends, making it a mystery why he spends so much of his time with Richie. His friends include two sad-cases named Spudgun and Dave Hedgehog who mostly hang out together, though Dave is also a family man. (His wife Susan is never seen but his daughter Doreen appeared once in the episode "Terror".) Richie does not appear to have any friends at all other than Eddie: he sometimes tolorates Spudgun and Dave Hedgehog if in need of company, though he actually despises both of them (particularly Spudgun) and considers all Eddie's other friends to be beneath him.

Eddie is also revealed to be a Queen's Park Rangers fan, as in "Holy", he sprayed the letters "QPR" on the wall with spray snow, and in "Dough", you can see QPR banners on his bedroom wall. He has been shown to break the fourth wall a few times in the series. It is also mentioned that men in Eddie's family have girls' names - his middle name is Elizabeth, and he once referred to a 'Great Uncle Susan'. Richie and Eddie bear perhaps closer inspection than any of Mayall and Edmondson's other characters. Despite sharing a deep mutual hatred, the two are eternally entwined due to their basic flaws and they seem to have an unspoken respect for each other as a result. Eddie's alcoholism and violent nature mean that he has not been able to hold down a steady job since his very short-lived career as a "bunny girl", back in 1978, and it is unlikely that any landlord would grant him tenancy, even if he could afford the rent. He is therefore forced to rely upon Richie's charity.

Richie, on the other hand, is such a pompous, self-obsessed, perverted, withering soul that without Eddie it is unlikely that he would ever make another friend, even if he wanted to (which he doesn't). The two have an unspoken acceptance of their interdependence and their relationship tends to fluctuate between acting like a married couple (filling in the crossword together, Richie putting an unconscious Eddie to bed every night), a mother and son (Richie often keeping Eddie 'in check' and scolding him, and often putting an end to his fun, often out of sheer spite even though Richie would like to indulge himself) and frustrated desperation. Both have died in numerous episodes, only to resurface unharmed the following episode. This partnership has similarities to those of Steptoe and Son, and Hancock and Sid in Hancock's Half Hour. 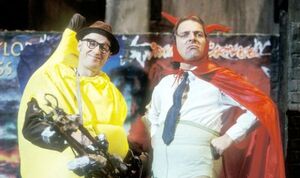 Eddie and Richie in their Halloween costumes 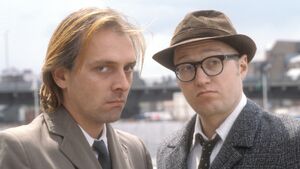 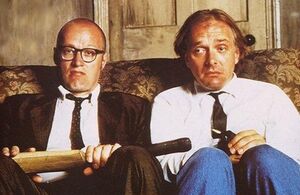 Retrieved from "https://hero.fandom.com/wiki/Richie_%26_Eddie?oldid=1883443"
Community content is available under CC-BY-SA unless otherwise noted.