Wisecracking.
Being with his friends.

Richard "Richie" Tozier is one of the protagonists in Stephen King's IT. He is the comedian of The Losers Club and likes to disguise his voice. As an adult, he is a stand-up comedian in the TV miniseries and a radio personality in the original book, who is particularly known for his voices and impressions. He is more reluctant than the others to face IT again. He eventually helps the remaining Losers kill It once and for all.

As a kid in the 1990 miniseries, Richie is portrayed by Seth Green, who also portrays Patrick Wisely in Scooby-Doo 2: Monsters Unleashed and voices Chris Griffin in Family Guy, Monty Monogram in Phineas and Ferb, and Leonardo in 2012's TMNT, and voices and motion-captures Jeff "Joker" Moreau in the Mass Effect series.

As an adult in the 1990 miniseries, he is portrayed by the late Harry Anderson.

As a kid in the 2017 film, he is portrayed by Finn Wolfhard, who also portrays Mike Wheeler in Stranger Things.

As an adult in the 2019 sequel, he is portrayed by Bill Hader, who also portrays Andy Warhol in Men in Black 3 and Barry Berkman in Barry and voices Firewater in Sausage Party, Flint Lockwood in the Cloudy with a Chance of Meatballs series, Fear in Inside Out, and Alpha in Power Rangers.

Richard "Richie" Tozier is the son of Wentworth and Maggie Tozier, and was born in 1945 in the novel, 1947 in the miniseries, and on March 7, 1976 in the 2017 adaptation. Despite the events of the novel, Richie had a great upbringing with his family, as he was close with his father. Mr. Wentworth was greatly fond of his son, as he happily indulged with doing voices like his son, as his mother wanted to understand Richie better.

In his childhood, he was friends with Bill Denbrough, Stan Uris, and Eddie Kasbrack, and would later befriend Ben Hanscom, Beverly Marsh, and Mike Hanlon. He was nicknamed "Bucky Beaver" by the school, as he had big front teeth, and hated wearing thick glasses, but found comfort in his idol, Buddy Holly. He was also nicknamed "Trashmouth", as he was foul-mouthed and loud, as he accidently insulted Henry Bowers and his gang. In the novel, it's assumed that he has ADHD, as it's stated that doesn't have much control of what he says or does.

After It was defeated by the Losers, they left the sewers with Eddie being dead when he was killed by It. This caused Richie to be distraught as he refused to leave Eddie behind. The Losers successfully escaped the sewers, and Richie later returns to the Kissing Bridge to carve the word R+E in honor Eddie before leaving Derry. Richie understood that Eddie already knew that. 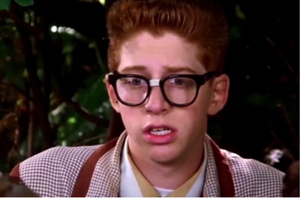 Seth Green as young Richie in the 1990 miniseries. 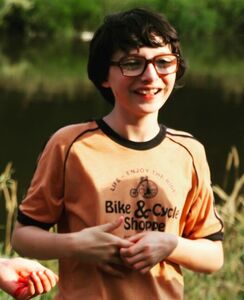 Finn Wolfhard as young Richie in the 2017 film.

Richie with Bill, Eddie, and Stan.

The Losers in It: Chapter Two.

Richie in It: Chapter Two. 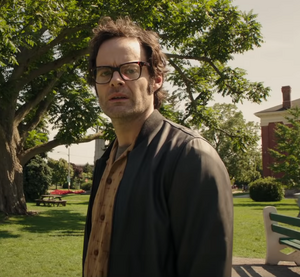