He has two teammates, Coo and Kine. He uses an ice breath to freeze the foes.

Rick made his debut alongside Kirby's other friends, Coo and Kine in Kirby's Dream Land 2. He looks like a meek hamster, but when he puffs himself up, he's bigger than Kirby. When he's carrying Kirby on his back, he can mimic Kirby's copy powers with some special moves of his own. Rick's claim to fame is his exceptional traction on icy and sandy surfaces.

In Kirby Star Allies, Rick appears collectively with Coo and Kine as a Dream Friend. Rick uses the Stone ability and the Sizzle element, and retains the ability to walk on ice without slipping and climb up walls.

Rick first appeared in Super Smash Bros. Melee as a collectionable trophy. In Super Smash Bros. Ultimate, Rick appears as a advanced-ranked support spirit that increases the user's stats afther eating. His spirit battle is agaisnt Pikachu and a yellow Kirby with increased move speed on an ice floored greens greens where the said Pikachu starts the battle with a fire flower. 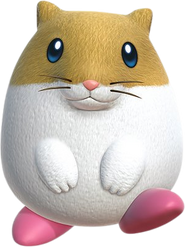