Colonel Rick Flag is the tritagonist of the 2016 film Suicide Squad. He is a US special forces officer (among the finest ever produced by the country), and the lover of June Moone. He was recruited by Amanda Waller to lead her new Task Force X team, alongside a team of Navy SEALS, in a high risk operation.

He was portrayed by Joel Kinnaman, who also play RoboCop in the remake of the movie with the same name.

Rick Flag is known to have graduated from West Point. He's served an unknown number of tours in the United States Military and one day ran into June during a mission. The two got close and they soon became boyfriend and girlfriend. He also ran into Katana and managed to convince her to be his personal bodyguard.

Rick Flag is called back to the United States and is assigned to ARGUS. under the jurisdiction of Amanda Waller. He's assigned to be the commander of the new task force and objects to it stating that Waller needs soldiers and not criminals. Flag has no choice though and reluctantly accepts his position as the field commander of the squad.

Flag soon accompanied Waller as he arrived at Belle Reve in Louisiana to recruit the members for the task force. Upon arrival, he was treated by Captain Griggs and was first introduced to Deadshot at a firing range to see his skilled marksmanship. 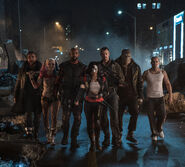 Flag with the Suicide Squad

"Behold the voice of God"

Add a photo to this gallery
Retrieved from "https://hero.fandom.com/wiki/Rick_Flag_(DC_Extended_Universe)?oldid=1722625"
Community content is available under CC-BY-SA unless otherwise noted.