Get Evelyn to Hamunaptra

Colonel Richard O’Connell, also known most famously as O'Connell or Rick, is the main protagonist of the Mummy series.

He was portrayed by Brendan Fraser, who also portrayed George of the Jungle in the titular series, Stu Miley in Monkeybone, D.J. Drake in Looney Tunes: Back in Action, and Cliff Steele/Robot Man in Doom Patrol. John Schneider voiced the character in The Mummy: The Animated Series, and also played Jonathan Kent in Smallville.

Rick is an American adventurer and was a former Colonel of the French Foreign Legion. He was married to Evelyn O'Connell née Carnahan and conceived a son, Alex O'Connell. Throughout his life, O'Connell had gone through many adventures, seeing many exotic locales and encountering many different peoples and customs, with his adventures turning towards a more eldritch direction as he first encountered the evils of the resurrected mummy Imhotep, going on to face many more supernatural foes later in his life.

Once O'Connell had grown older, he had dedicated time to several adventures alongside his friend and oft accomplice Izzy Buttons, in misdeeds such as bank robbery, but had abandoned this when he enlisted in the French Foreign Legion in an expedition to an ancient Egyptian necropolis known as Hamunaptra, with Rick as one of only two survivors, returning three years later, finding the ancient mummy Imhotep and stopping him from an ascent to power with an archaeologist-turned librarian called Evelyn Carnahan, whom O'Connell had fallen in love with during the expedition, and married shortly thereafter.

Imhotep would, however, resurface into Rick's life several more times, causing Rick to defeat him with the help of his own family. Over the years, Alex and Rick's relationship suffered some strains as Alex left his family behind to join the United States Air Force, these strains continuing well on for years until their collaboration in the defeat of the ancient Chinese immortal known as Emperor Han, which led to a reconciliation betwixt father and son.

Rick's adventuring days took their toll on his health and put his life on a constant risk as he was almost hung in the Cairo prison, strangled by Imhotep, and nearly killed fighting the Emperor Han.

Richard "Rick" O'Connell was born in 1902 in Chicago, Illinois to Jack O'Connell and an unnamed woman. When Rick was ten years old, his father left him and his mother, being ashamed of his status as a Medjai. Rick eventually became an orphan and spent time in a Cairo orphanage, and received the Medjai tattoo. Unaware of the meaning of the symbol, Rick disguised the tattoo by placing a leather wristbrand on it.

Later on, Rick joined the French Foreign Legion and rose to the rank of colonel, and became friends with Beni. In addition, Rick met Izzy Buttons, and the two would participate in a bank job that went wrong.

O'Connell's many past exploits led to trouble later on; at least one known act involved a "bank job" in Marrakesh with his friend Izzy Buttons as an accomplice: Izzy was meant to fly low in his plane and hide while O'Connell would signal his friend to come in for the pickup; as Izzy was caught and shot, O'Connell nonchalantly walked up with a belly dancer girl at his side. This would be one case which Izzy Buttons cited in later years as his reason for not wanting to work with O'Connell.

Several other misdeeds with Izzy included shaving Izzy's head and waxing his legs to use him as a surfboard in Tripoli and Izzy doing "unspeakable things" to a camel at the Cairo Opera House on New Year's Eve in 1923 A.D..

Once O'Connell had made it back to civilisation, he spent three years in rags, meandering about Cairo and ending up in a tavern where he was pick-pocketed by an English man, Jonathan Carnahan, who had taken his box, and a bar fight ensued that saw O'Connell arrested and taken to Cairo prison, ostensibly under the charge of deserting his post in the French Foreign Legion. In Cairo prison, O'Connell had met the prison warden, Gad Hassan, whom he despised and spared no chance at making things difficult for, including insulting him outright. O'Connell, then behind bars, was soon after visited by Evelyn Carnahan and Jonathan, who had come to ask of the small puzzle-box that O'Connell had found while at Hamunaptra. O'Connell eyed Evelyn with some interest, and divulged the story of how he had found the box: he had been at the city when he found it, recognising Jonathan as the man that picked his pocket and took the puzzle-box from him. Jonathan was thus punched hard in the face by O'Connell, and asked by Evelyn if he remembered the way back to the ruins, so that he might take her there: O'Connell beckoned for her to come closer so that he could whisper through the bars, but grabbed hold of her and kissed her, telling her to get him out of prison.

With twenty pounds to clean, O'Connell took a shower, shaved and cut his hair, traveling to GizaPorto to meet the Carnahans, while meeting several beggars and street vendors, without giving any of them money. Evelyn suspected that O'Connell would take the money just to spend it in some bar, and even expressed his disapproval for it; being surprised when a new man appeared at the ports: clean shaven. Jonathan stepped forward and patted O'Connell's chest affectionately, O'Connell promptly running his hand inside the jacket where Jonathan had stroked him to make sure Jonathan wasn't stalking him; Jonathan stated that he would not and would never steal from a partner, not expressing resentment that he had been punched before. Evelyn stepped forward and asked O'Connell to look her in the eye and promise not to be stealing her money, but O 'Connell made it clear that he was not deceiving anyone, since his old garrison believed in Hamunaptra so much that they , without orders, they marched through Libya to find the city, finding only death. Picking up his pupils' bags, he frowned into the boat.

Seven Years later, Rick married Evelyn and they had a son named Alex who they took to one of the Pyramids where it was the year of the Scorpion.

Tomb of the Dragon Emperor

Rick O'Connell is a man of action that believed in shooting first and asking questions later, being curt and brash when he needed to be. Although O'Connell acted with bravado in most situations, he was not incapable of pathos and sympathy, having fallen in love with and marrying Evelyn Carnahan, having a son with her, considering his family to be the most important thing in his life. Along with his prowess in firearms, O'Connell was also proficient at defending himself unarmed and knew how to improvise when in a perilous situation. 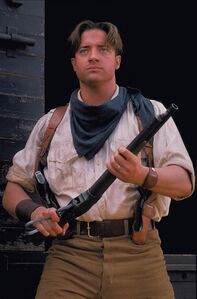 Rick and Evelyn argue about why they awoke Imhotep.

Rick interrogates Beni Gabor about why he works for Imhotep. 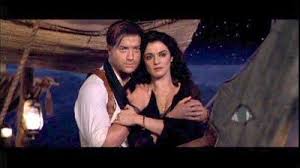 Rick and Evelyn try to rescue their son from Imhotep.

The O'Connells with Jonathan and Lin. 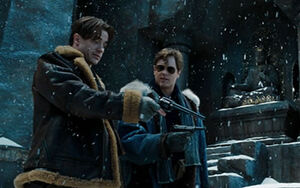 Rick with Alex look at weapons. 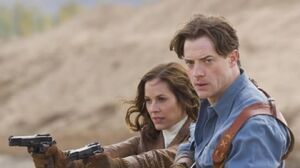