Protect and provide for his family, Keep Lucy out of trouble

Ricky Ricardo is a hero from the 1950's American television shows I Love Lucy and The Lucy–Desi Comedy Hour/We Love Lucy. He protects, looks out, and cares for his friends and family from various threats on both shows. He is married to Lucy and has a son named after him nicknamed "Little Ricky". His circle of close friends include his landlords: Fred and Ethel Mertz. He has shoe-black hair, is clean shaven, and has an average build. He is Cuban and has a huge family that still lives in Cuba. He is portrayed by Desi Arnaz.

He has a great sense of humor which mixes well with Lucy, Ethel, and Fred in every episode. For example, in the episode The Amateur Hour, Lucy bought a new dress because she says she doesn't have anything to wear. As a joke, Ricky pretends to go to work in his underwear.When Lucy sees this he responds "I haven't a thing to wear".

However, he can at times have a bit of a temper when it comes to Lucy's troublesome antics. He has often yelled at her for that reason, and even spanked her a few times.

In an episode of 'The Lucy/ Desi Comedy Hour,' we see that Ricky first met Lucy when she was visiting Havana on a cruise. She and a friend of hers complained to the ship's captain that there weren't any eligible men on the cruise, so in desperation the captain secretly hired Ricky and a friend of his (Who at the time were running a taxi/ sightseeing service, though even then Ricky dreamed of finding success as a musician) to act as unofficial escorts for the two women while they were in Havana. During this time, however, Lucy and Ricky began to sincerely fall in love with each other, as did their respective friends. Ricky eventually moved to America (Along with a few bandmates) and married her.

He works in a nightclub called the Tropicana, leading the band there. He lives in New York City in a brownstone apartment owned by the Mertzes. Later on in the series, they all move to California (to help Ricky with his movie career) and then Connecticut (because country life was more preferable to Lucy than city life).

In some episodes, Lucy tries to get into show business but usually something hilarious happens. For example, during Ricky's screen test for Hollywood Lucy is given a part to help the scene. However, Lucy finds out her face won't be seen on camera. She attempts to face the camera but eventually the director had to shoot the entire scene with a close up on Ricky.

In most episodes, the gang ends up in very ridiculous situations (i.e., pushing a horse up a staircase) but everyone looks out for one another. For example, in one episode, Ernie Kovacs wants to have Ricky on his show. However, Lucy finds out Ernie meant only Little Ricky. Lucy goes to great lengths to get an opportunity to talk with Ernie before the show. She wants to convince Ernie to have a show with both Little Ricky and his father. By the end of the episode, everything turns out great. Unfortunately, in real life, this was the last episode of the series and Lucille Ball and Desi Arnaz divorced shortly thereafter. 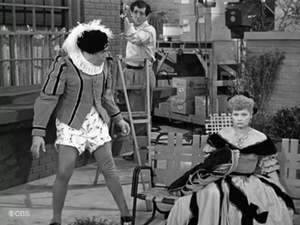 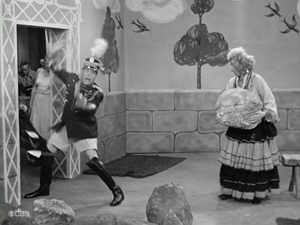 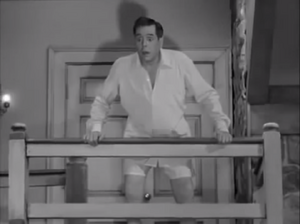 Ricky being glad to get a job from Ernie Kovacs without an audition from Lucy Meets the Mustache episode (The Lucy–Desi Comedy Hour/We Love Lucy)
Add a photo to this gallery
Retrieved from "https://hero.fandom.com/wiki/Ricky_Ricardo?oldid=1699590"
Community content is available under CC-BY-SA unless otherwise noted.