Depending on episodes. (with mixed results)

The citizens of their town

Ricochet Rabbit (voiced by the late Don Messick) worked as a sheriff in a Western setting called Hoop 'n' Holler.

Ricochet, true to his name, would bounce off all the walls yelling "ping-ping-ping!" His deputy Droop-a-Long Coyote (voiced by the late Mel Blanc impersonating Ken Curtis' Festus Haggen character from the TV Western, "Gunsmoke".) was never able to be as "jumpy" and would end up crashing through a window, or some similar accident except on one occasion when Ricochet and Droop-a-Long were running away from a bear. Unfortunately for both of them, the bear also managed to bounce off.

In addition to his speed, Ricochet was known for using trick bullets against his opponents (for example, a bullet that would stop in mid-flight and hover while striking the bad guy with an impossibly oversized mallet or drawing a target on his nose and punching the target, or exploding after inside bigger compartments of the bullet).

Ricochet Rabbit is a white rabbit wearing a sheriffs outfit with a purple hat and a sheriffs badge.

He is a pink coyote wearing a green hat, he wears a sheriffs badge and a white bandanna. 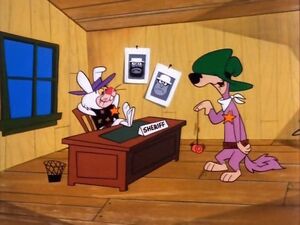