Rider is a heroine from Fate/stay night. She is the servant of Sakura Matou during the fifth Holy Grail War, but she became her brother Shinji's servant due to Sakura's refusal to be an enemy of Shirou Emiya during the war.

Rider is first seen scouting around Homurabara Gakuen. Rider is silent, sultry, and vigilant, never hesitating to shield her Master from harm. With Shinji incapable of lending any Prana to her, she is forced to seek alternative means to augment her abilities. To compensate for this weakened state, Rider employs covert battle tactics and takes full advantage of any territory around her. Her weapon of choice is a pair of long iron nails fastened to opposite ends a single chain, which she effectively thrusts from distances.

Shinji's arrogance often sees to it that Rider is usually the first servant to be eliminated in every route of Fate/stay night, except in the Heaven's Feel route.

She is voiced by Yu Asakawa in Japanese and Karen Strassman in 2006 In English. She is also by Melissa Fahn.

Her real name is Medusa, the Gorgon from Greek mythology. Medusa, along with her sisters, Stheno and Euryale, were born from the wishes of mankind for ideal goddesses, contrasting the flawed gods of Olympus. All three Gorgons were blessed with beauty, but unlike her sisters, Medusa was mortal and fated to grow older and taller over time. Medusa was also cursed with Mystic Eyes, which transmute all living flesh under her gaze into stone, requiring her to wear a blindfold. Because of these differences, she was bullied by her older sisters. At one point, Medusa was given Pegasus as a gift from Poseidon.

Rider is silent, sultry, and vigilant, never hesitating to shield her Master from harm. With Shinji incapable of lending any Prana to her, she is forced to seek alternative means to augment her abilities. In Heaven's Feel, she exhibits a strong desire to protect Sakura, even after her Master's death. In Carnival Phantasm, her protective streak towards Sakura is comically exaggerated to the extent that Rider does not hesitate to hurt or injure Shinji should he even attempt to touch Sakura.

Rider has longer light magenta hair and wears a blindfold resembling a magenta visor like band over her eyes, a red marking on her forehead, she wears modfied greek mythology short black dress, wears a magenta collar-like choker, bands and handcuff with long black sleeves, cutoff black legging with magenta armor to the legs, and black shoes. When her visor like band escape after being defeated by Saber's route and release her Cybele, she has pink eyes.

In Fate/hollow ataraxia, when she not in battle she wears a black turleneck, dark navy pants, wears glasses, and has her hair slightly tied with a purple ribbon.

Rider is a tall, dark, silent and gorgeous Servant controlled by Shinji Matou. Rider is always seen with a blindfold and very long hair. Unlike Shinji, she is a little amiable; in fact, she dislikes him and considers him to be a coward. She wields a very long chain in battle with spikes on the ends. These chains make sounds like slithering snakes. However, because Shinji is not a magus, he greatly holds back her true potential, making her one of the weakest Servants.

Because she is so quiet and her Master is so difficult to deal with, she remains quite mysterious until the third route when she begins receiving more focus, which is also where her true identity, the Gorgon Medusa, is revealed.

Rider fights mainly with an unnamed dagger in close combat that resembles a large nail. It is not a Noble Phantasm, and while its origin is unknown, it is thought to be a weapon that reflects her inner character. She has the ability to summon a Pegasus as a mount, and it is far greater in power than a regular one.

She has three Noble Phantasms. Her main offensive ability is Bellerophon, which allows the Pegasus to use an extremely powerful charge that resembles an arrow of light. She can use it while mounted, or it can be launched directly from the summoning circle without having to ride it. She also has use of Blood Fort Andromeda, a Bounded Field designed to collect life energy from whoever is inside. Once it is set and activated, it can instantly liquify any normal humans inside and convert them into energy. Breaker Gorgon is another Bounded Field that seals the target inside the user's mind. She mainly uses it on herself in the form of a visor to seal her Mystic Eyes, though she does use it once on Shirou Emiya to take energy from him. 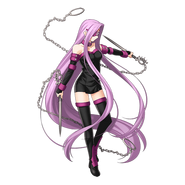 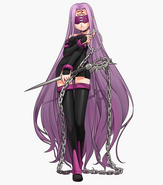 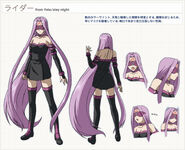 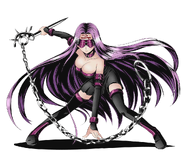 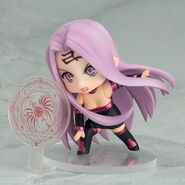