Riff-Raff is a member of the Catillac Cats and is known for being the leader of the group.

He wears a white and pale blue flat cap with a matching pale blue scarf. He is usually seen with a cane and a confident attitude. Riff-Raff has a light orange-brown fur with a black nose.

Riff-Raff has lived in the streets for a majority of his life and has always desired of making it big. This desire if what became known into the Catillac Cats, a group consisting of his best friends. Although he has a short temper and a quick fighting attitude, he still acts as a fair gentleman to his love interest, Cleo. He, along with his friends, live in the Junkyard in an old, modified airplane. 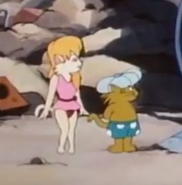 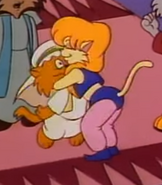 Add a photo to this gallery
Retrieved from "https://hero.fandom.com/wiki/Riff-Raff_(Heathcliff)?oldid=1644313"
Community content is available under CC-BY-SA unless otherwise noted.