Animals
Rigel is one of the protagonists of Ginga Densetsu Weed: Orion and Ginga: The Last Wars. He is the youngest son of Weed and Koyuki.

Much like Orion, Rigel has a foul mouth, and he usually yells at his sister Bellatrix. He seems to have calmed down a bit after spending time with Kurohabaki Terumune.

After Hybrid Bear's death, Rigel and his siblings are born in the Futago cell in the early fall, at the end of the series. Daisuke Fujiwara named the puppy according to the Rigel star.

Rigel and his siblings have become famous, as they are superintendent puppies. They learned from Kisaragi's ability to catch crabs.

Rigel lives with his family in Ōuu until the volcanic eruption surprises them. In the latter months, no other dogs are seen and Sasuke alone takes care of Rigel, Sirius and Bella.

When Sasuke and Sirius disappear into the snowstorm, Rigel starts looking for them and gets lost. He ends up with Terumune, who teaches his survival skills and powerful Ningatō fighting techniques. Rigel become attached to the old dog very much and begins to call him grandpa. Terumune, however, gets sick, leaving Rigel hunting for this food and taking care of it. When Shinnosuke tried to kill Terumune with two other assassins, Rigel and Terumune succeeded in overcoming them with Rigel's Ningatō.

Thanks to Terumune, Rigel finds his grandfather Gin seriously injured, along with many other Ōu warriors. Terumunen's death, Rigel ends up Kotetsu follow Kurokirimaru, Tsumuji and Kōsetsu to lead the pack. Rigel's uncle, Kotetsu, is part of the pack, but in reality is a spy. Rigel his moves and Masashige company and they will meet with their parents.

Rigel will continue with his wife as Masashige dies. They meet Daisuke, Hidetoshi's new dog, Andy. Rigel and Kotetsu lead them to a mine where the majority of Ōu's warriors are locked. Warriors are released and Rigel is associated with their own.

When the Ōu army is preparing to fight the Masamune army, Rigel is among the other kittens and fox bitches with a rock face. When Masamune climbs up the cliff, Rigel runs to get his father's help, but I hit Rocket . When Andy drops down, Rocket jumps down to save him.

When Masamune reaches up and attacks Yamabiko, Rigel crashes and uses Ningatō. Masamune also controls the technology and is Rigel's own stronger. Both are vulnerable to impact collisions, but Rigel is much more serious and he loses consciousness. Masamune drops the puppy into the ravine, but Nyadu Sansai rescues him.

After the death of Masamune, Rigel and the other kittens are following the reptiles and find Kojūrō's body. They bury it together.

Finally, the Spring comes to Ōuu, the first one Rigel has experienced.

Rigel is at the beginning of the story on the Akame Mountain with a one-year training session together with Orion, Sirius, Andy and Bon. Yamabiko arrives from Shikoku, when Rigel is calling to Orion, and adult friends meet for the first time in half a year.

Later, Akame is running to announce that Monsoon's under attack have invaded Ōu. Rigel leaves immediately with the forces. They are waiting for Yamabi troops in the Kyoto Mountains, but after two days Orion decides to leave Ōu and asks Rigel to stay. Rigel initially claims to believe that someone else is better suited to the task and wants to be involved in helping the Futago. After all, Sasuke agrees to the task and others leave for the trip.

The forces of Orion and Yamabiko will later unite and arrive at Nagano's Unsail. The United Dog Army then goes to Ōua.

When the forces stop at Kunim, Unsa sets four intelligence units on all the main air routes in the Futago slope. Rigel is part of the second group leaving the East, including Sirius and Kawasemi.

At night, Tsuyoshi runs by chance to the group and says he is looking for Akame. Tsuyoshi first thinks of Sirius as Weed, but Kawasemi corrects the misunderstanding. Tsuyoshi then asks Akame where other dogs explain the situation to him. 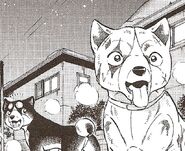 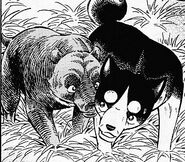 Retrieved from "https://hero.fandom.com/wiki/Rigel?oldid=1615473"
Community content is available under CC-BY-SA unless otherwise noted.