Save Urbosa from her fate. (succeeded).

Makeela Riju, better known as Riju, is the current chief of Gerudo Town who has been forced into leadership too early when her mother, the previous chief, died unexpectedly. She first appears in The Legend of Zelda: Breath of the Wild where she serves the purpose of pursuing Divine Beast Vah Naboris, which was corrupted by Calamity Ganon while trying her best to be a good leader to her people.

Riju was given the title of Gerudo Chief at a young age after losing her mother to unknown circumstances, with Buliara as her advisor and bodyguard to her, and has domesticated a Sand Seal named Patricia, a gift from her late mother. Due to her lack of experience of leadership and young age when given the title, most of her people are doubtful of her ability to rule as well as her ancestors, which makes Riju stuck in worry and doubt in her abilities as Chief. One day, she went to investigate the first appearance of Divine Beast Vah Naboris, but suffered a terrible accident; which had Buliara blaming herself for not protecting Riju and subsequently never left her side. Riju's doubts worsen over the fact that due to their absence, the Thunder Helm, which was the heirloom in the line of Gerudo Chiefs, was stolen by Master Kohga and the Yiga Clan.

Link is able to enter Gerudo town, disguised as a Hylian woman as men are prohibited from ever entering the city, where he would meet with Riju to assist with dealing with Divine Beast Vah Naboris, which was creating sandstorms and attacking anyone with lightning if they drew near. Riju and Buliara learn Link's identity as a man, but allows him to be in town due to his connection to Lady Urbosa the former chief of Gerudo Town, and only as long as he maintains the disguise. Riju wanted to help, but she couldn't due to the Thunder Helm being stolen by the Yiga Clan and Vah Naboris's lethal lightning powers, and asks Link to help them get it back, which he agrees to do.

After Link retrieves the Thunder Helm, with the consequences of the death of Master Kohga being steep, Riju thanks Link for returning it to her and puts it on asking how it looks on her. This triggered Link's memory of Urbosa, leaving Riju to think he was just staring into space and admits that the helm doesn't fit her well as it often slides to the side of her head. Later, Link meets with Riju at the outskirts of Gerudo Desert to devise a plan to stop Vah Naboris's rampage. The Gerudo Chief activates the Thunder Helm they use Sand Seals to enter the danger zone. Link must stay in the forcefield as much as he could to avoid getting struck by lightning while shooting Bomb Arrows at Naboris's feet to put an end to the vicious lightning sandstorms it creates. Link then boards the Divine Beast while Riju says good-bye to him, wishing him luck.

After Thunderblight Ganon is obliterated and Urbosa's spirit is freed, she has Divine Beast Vah Naboris move to a higher ground to take aim at Hyrule Castle. Riju, Buliara, and the Gerudos are relieved to see that the threat has ended and continue with their normal lives in peace.

Riju reappears in this game when she is summoned from the Breath of the Wild timeline by Terrako, a small Guardian who time-traveled back to before the Great Calamity to change Hyrule's fate for the better. When Urbosa is struggling against Thunderblight Ganon inside Divine Beast Vah Naboris, just as the Shard of Calamity Ganon moves in for the kill, it is smacked away by Riju and Patricia appearing and hitting it from the flank. Urbosa is shocked to see Riju, but treating the older Gerudo Chieftain with formal introductions by calling her "Lady Urbosa", Riju reminds her to focus on the battle at hand. However, some time later, it is clear Thunderblight Ganon is too powerful for the two Gerudo Chieftains and Riju's sand seal to handle. As Riju fears she's failed Urbosa with wanting to protect her, Urbosa assures her that she bought them enough time for help to arrive as she points out the arrival of Link, Princess Zelda, and Impa, who help to take down Thunderblight Ganon for good, keeping Vah Naboris under Urbosa's control and saving Urbosa's life in the process. Riju then aids with clearing the way for Link to reach Vah Medoh to help Revali and Teba against Windblight Ganon. Though Windblight Ganon escapes for the moment to be dealt with by Revali and Teba later, Urbosa thanks Riju for her help as she quite possibly saved Urbosa's life. Riju assures her it was a team effort before Urbosa asks Zelda about what happened back at Hyrule Castle.

Taking Vah Naboris to defend Akkala Citadel and Fort Hateno from Calamity Ganon's forces, upon seeing the huge force before them, Riju begins to show doubt they can handle all of them, but a pep talk from Urbosa convinces her they can handle it before taking Vah Naboris into battle. After taking out the first wave, they are shocked to see them resurrect as skeletal Stal versions of themselves with another fresh wave coming in. Though Urbosa starts to show fatigue and annoyance by it, a pep talk from the young Riju leaves Urbosa impressed to see a young Gerudo vai after her own heart, before they get some much needed assistance from the other Divine Beasts, leaving Urbosa and Riju to laugh at what kept them.

With Hyrule Field cleared of enemy forces, Riju and Urbosa are summoned by Purah to join the allied coalition of Hyrule's various races to take back Hyrule Castle from Ganon. Seeing the huge number of Rito, Gorons, Zoras, and their Gerudo vai, along with a reformed Master Kohga and his Yiga Clan rejoining the Sheikah, and the Divine Beasts, Urbosa speaks for herself and Riju with awaiting Zelda's orders as, with her father King Rhoam's blessing and support, Zelda rallies the united races for their final assault on Hyrule Castle.

Despite his forces being far and few, even resorting to a Blood Moon to revive them, Ganon is severely weakened by the Divine Beasts before Link, Zelda, King Rhoam, Kohga, Impa, and the Champions of both present and future reach the courtyard, only to be met by the dark seer Astor and Harbinger Ganon, the Terrako of that timeline corrupted by Malice that followed the future Terrako into the past. After defeating the two of them, Astor, pushed to total psychotic breakdown, orders Calamity Ganon to devour the heroes, but Ganon decides that Astor has outlived his usefulness, and uses him and Harbinger Ganon to create a perfected body for itself. After corrupting the future Terrako and forcing Link into fighting and critically damaging it, Zelda decides Ganon's terror ends now.

Fighting through to the inner citadel, Calamity Ganon proves invulnerable to any of their attacks. Only when Zelda uses her holy power to try and block one of Ganon's attacks that the power revives Terrako and it uses the last of its strength to kamikaze Calamity Ganon, breaking his defenses and rendering him vulnerable. After Link cleaves Ganon in two with the Master Sword, Zelda uses her power granted to her by the Triforce and Hylia to seal Calamity Ganon away once more, freeing Hyrule from his threat.

With Hyrule safe 100 years sooner than in Breath of the Wild, as the Champions gather on the castle balcony to overlook a free Hyrule, the ancient screw that was left over following Terrako's kamikaze attack reveals to still have some residual energy, and prepares to send the future Champions back to the Breath of the Wild timeline. Riju exchanges parting words with Urbosa, hoping to put the lessons she learned with the older Gerudo Chieftain to good use back in her time, before she and Patricia, along with Teba, Yunobo, and the older Prince Sidon, are returned to the Breath of the Wild timeline, their memories from fighting alongside the Champions of the past in saving the Hyrule of an alternate timeline staying with them as they are returned home. 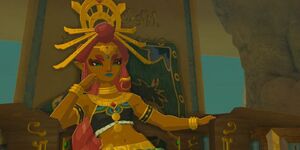 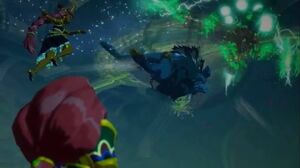 Riju and Patricia save Urbosa by ramming into Thunderblight Ganon.
Add a photo to this gallery

Retrieved from "https://hero.fandom.com/wiki/Riju?oldid=2230645"
Community content is available under CC-BY-SA unless otherwise noted.