Heroic creation
Rika (Japanese: ファル, "Fal") is a playable character in Phantasy Star IV: The End of the Millennium and Chaz’s love interest. She is 1 year old.

Rika is a young lady with pointy catlike ears with earrings, long pink hair, and blue eyes. She wears a black leotard with black paludrons, a sliver breastplate, black fingerless gloves, a white cape, and and long black boots.

Rika uses claws and can use healing techniques and she has high speed.

Rika is a Numan (a cat/human hybrid), the product of a thousand years of continuous research in genetic engineering by the biological support system artificial intelligence, Seed, and a successor to Nei, whose split into Nei and Neifirst marked her as something of a flawed prototype and prompted Seed to develop a more improved, stable model.

When she joins the party, she is only one year old and has spent her entire life within the Bio-Plant, but has been given a basic education by Seed and Wren; Rika refers to them as her teachers, and respects them greatly.  Over the course of the game, she displays considerable knowledge of Algo's ancient advanced technology and can operate machines that other party members cannot, particularly the crashed ship northwest of Nalya, but she lacks personal experience and is fascinated with the outside world.  This is reflected in her level progression; she begins the game with zero experience and gains new levels faster than any other character.

Despite her limited life experience, she seems to have a high degree of emotional awareness, and some of her dialogue with NPCs, interactions with Rune (particularly after procuring the Psycho-Wand), and encounters with Dark Force and its related schemes suggest that she has a low-level psychic empathy.  This may have been a deliberate choice on Seed's part; with all of her teachers being AI units and unable to leave the Bio-Plant to learn social interaction, designing her with a sixth sense may have been a work-around; Rika rarely, if ever, has difficulty understanding nuance or innuendo from other characters.

She develops a rapport with Chaz as the story progresses, and elects to live with him at the end of the game.

In supplemental materials, it is suggested that after Chaz's untimely death, she becomes the top Hunter in the Guild, and a single mother to their son. 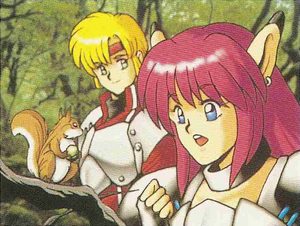 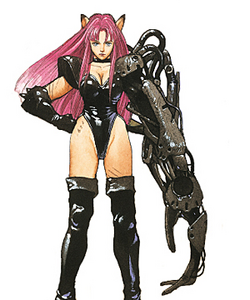 Rika with a giant mechanical arm