Higurashi: When They Cry

Mop
Scythe from the Saiguden

Rika Furude is the true main protagonist from Higurashi: When They Cry and the main protagonist of it's sequels Gou and Sotsu. She is the daughter of the shinto priest in Hinamizawa. She is the miko, or shrine maiden, of the Furude Shrine, appearing in miko garb for her part of the Watanagashi Festival. She appears as the main character beginning with Minagoroshi-hen. She also appears as one of two main characters in Ayakashisenshi-hen (the other being Satoko Hojo).

Rika seems like little more than a secondary character for much of the first half of Higurashi. As the story progresses, however, viewers learn that she is actually at the heart of most of the strange events, as her death is the trigger for the Great Hinamizawa Disaster and following incidents. Despite only being killed five times on-screen, dialogue eventually confirms that she has been killed once for every arc (excluding Matsuribayashi-hen and Miotsukushi-hen) and all other unseen worlds.

Rika is a younger classmate in Keiichi's school, and is in the same grade level as Satoko. Naturally, she is great friends with her, as they live together in the same house. She is revered by the villagers as the heir of the local shrine and plays the role of a Miko in the annual Watanagashi Festival. She has been the head of the Furude house since her parents died but rarely attends town meetings due to her young age. Not only is she the only daughter of the Furude clan, one of the three great houses of Hinamizawa, she is also believed to be the reincarnation of the local deity Oyashiro-sama. Although Rika is entitled to attend and have a voice in village meetings due to her family status, she is not required to attend because of her young age.

While she does speak in normal context, she likes to say nonsense words such as mii and nipah and often ends her sentences with nano desu, lit. "it is so"), which inflame Rena's passion for cute things. She also likes to describe events using sound effects, such as "The cat was going 'nya nya' and 'scritch scritch'" or saying "Clap! Clap! Clap!" when clapping her hands. In reality, she is being reborn in a 'new world' at some random time before or during June 1983, and in most of the worlds she is the only one to remember the previous lives. She believes she has lived over 100 years by the time of Tsumihoroboshi-hen, but continues to act like a child in order not to alarm her friends. Prior to Matsuribayashi-hen, she is the only one able to see Hanyuu, who has been an "imaginary friend" to her all her life. Despite her young appearance, she seems to be quite fond of wine, as well as kimchi, which she uses to silence Hanyuu when Rika is in a bad mood; this works because both Hanyuu and Rika's senses are linked together, though this seems to be redundant by Matsuribayashi-hen, possibly because of Hanyuu's coming into the world. It is later revealed that Rika's death would cause an outbreak in Hinamizawa which everyone would go on a rampage of hysteria. Further on, she attempts to stop Takano from her killing spree by pulling her friends and others around her together.

Role as the Queen Carrier

As a daughter of the Furude clan, Rika is thought to be a "Queen Carrier". Early theories on the Hinamizawa Syndrome hold that the Queen Carrier is a necessary part of the village's survival, and that without her the villagers would go mad in 48 hours. This theory is later proven to be untrue in Watanagashi-hen, in which when Shion Sonozaki kills Rika, and Meakashi-hen, in which Rika commits suicide. In both instances, the villagers do not react and life for them goes on normally, even through the middle of the Heisei Era and past the year 2000, as shown by Meakashi-hen's endgame TIPS. However, some of the deference shown to Rika by the villagers may be an unconscious acknowledgement of her role as Queen Carrier.

How exactly the status of Queen Carrier is handed down is unclear, though it appears that it is passed down through the females of the Furude clan. It is because of this inheritance that Takano Miyo pursues her as a research subject. Her parents refuse to allow Rika to be used in this manner, and to get her way, Takano is more than willing to get rid of them. Rika's father dies after being drugged by the Yamainu, and Rika's mother was vivisected for being the Queen Carrier before Rika. Eventually, Takano decides that, after years of observing, she needs to kill the Queen Carrier as well. Rika's death is the pivot point for each of the scenarios of Higurashi; with her death, Takano is able to wipe out the entire village using the forces at her disposal, in order to "prevent" the "doomsday scenario" her grandfather predicted for the village, while at the same time achieving "god" status for her and her grandfather.

Rika has long purple/blue hair in a hime cut, fitting her image as a miko. Her eyes are fairly droopy and purple, and she is the shortest character of all. On school days, Rika wears a white short sleeved shirt with a pink bow, a navy-blue skirt, navy suspenders, white socks and red or brown shoes. On free days, she wears a green sundress, with a white bow in the front and white sandals. During the Watanagashi Festival, she wears a traditional miko uniform, complete with a ornate hoe topped with tassels.

Rika often seems wise beyond her years. As a very young child during Himatsubushi-hen (which is set in June 1978), she predicted her own death in June 1983 to the visiting Akasaka Mamoru. Childish Rika has a tendency to speak using "cute" phrases; including sound effects and nonsense words such as "nipaa", "mii", cat sounds and saying "pachi pachi" (clap clap) while clapping her hands, all of which drives the cute-loving Rena Ryuuguu wild. To add to her "cute" and girly manner, Rika refers to herself with the pronoun "boku", which, although generally used by boys, is considered extremely cute when used by young Japanese girls. She does not address anyone with honorifics, and always greets people using their first names. In Japanese culture, this would be considered incredibly rude and even sometimes degrading, but being the Furude miko, no one seems to mind much.

When revealing her True Personality, Rika's cuteness disappears and she turns cynical and more mature. She switches pronouns from "boku" to "watashi" and her voice drops to something more resembling a grown woman's than a child's. This is the persona Rika uses when thinking and when speaking to Hanyū, so it can be assumed it is her real personality, which she keeps under wraps to avoid scaring her friends. Rika's second character song, S.A.G.A. ~Rinne no Hate ni~, is sung almost entirely with her True Personality. This personality is also considerably bold and occasionally rude to people.

The first time her True Personality is shown is in Himatsubushi-hen, when she warns Akasaka to go back with his wife and save her from dying. It appears that over the hundreds of worlds she has been through, Rika's True Personality has become understandably somewhat distorted and sly, as she seems to derive some pleasure out of taunting people, such as Akasaka, with knowledge that she should not have.

Rika used to resist her fate with much greater enthusiasm, but over time she was mentally worn down and eventually resigned to her fate. As a result, she seems to have almost no interest in anything, as she has been through everything many times already (save for Mion Sonozaki's whimsical club activities, which seem to be one of her few pleasures in life), and she welcomes any kind of change, good or bad.

The TIPS reveal that when her parents were still alive, she showed no emotion, only reacting to something unexpected. This greatly concerned her mother, who couldn't understand Rika no matter how hard she tried, and made their relationship difficult. However despite her cold personality she still cares for her friends and most importantly Hanyuu, it is shown that she also cares for her mother, when after she woke up from her coma, she cried thinking that she killed her mother to get back there.

Satoko is Rika's best friend, and they have been living together since the deaths of both of their parents. Satoko is usually the only one who can tell when Rika is upset, as well as the only one who is not fooled by her cute phrases that she uses to hide her true feelings. Like all of her friends, Rika tries to protect Satoko because she knows how much pain she has been through, especially since many villagers still shun Satoko for her parent's support of the dam project, while at the same time they praise Rika at every opportunity.

Rika was the only one besides Irie Kyōsuke and Takano that knows Satoko needs regular shots so she will not succumb to the Hinamizawa Syndrome; everyone else, including Satoko, believed that she was taking experimental medicine, until she reveals the truth to them in Minagoroshi-hen.

In the sinless world of Saikoroshi-hen, where none of the main tragedies of the series occur, Satoko bullies Rika, since the Rika in that world was infamously known in the school as the girl who used her cute mannerisms to exploit the boys who had a crush on her, most notably Tomita and Okamura, to get what she wanted. Because Satoko's and Rika's parents never died and Satoshi Hojo did not disappear, she never got close to Rika like she does in every other timeline.

While their relationship is somewhat vague due to the "eccentricity" of her situation, Rika does respect Keiichi and the two are very close friends. Rika considers him to be her only hope in escaping her fate, and is often genuinely surprised by his actions. This may be one of the reasons that Rika seems to care for Keiichi and so often tries to protect him. In Higurashi no Naku Koro ni Kira, Rika seems to have given him a nickname of her own calling him "keikei".

Rena and Rika are close friends since the start of the series; Rena often finding Rika cute and wanting to "take her home." Rika likes Rena's friendly and innocent personality and tries to protect her from relapsing into symptoms of the Hinamizawa Syndrome.

Rika is the only person able to see Hanyū for most of the series, as Hanyuu doesn't appear to the viewer until Minagoroshi-hen and does not exist in the physical world until Matsuribayashi-hen. Hanyū is something of Rika's "guardian angel", and has been with her since she was born. Since Rika is the eighth generation of first-born daughters and thus the true reincarnation of Oyashiro-sama, she is the only one who can see Hanyuu. Even though she finds Hanyū annoying sometimes, Rika cares deeply about her. Rika is a constant reminder of Hanyuu's own daughter, Ouka Furude, as mentioned in Kai, since both are very similar in appearance. As a result, Hanyū's motherly instinct often kicks in whenever Rika seeks help. 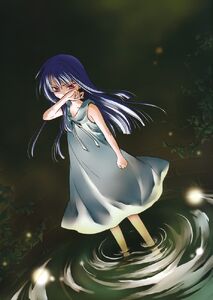 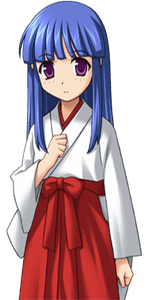 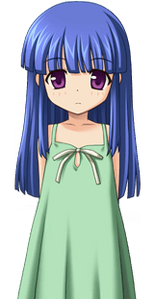 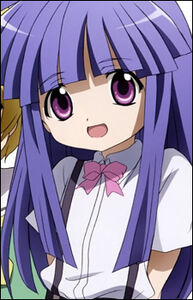 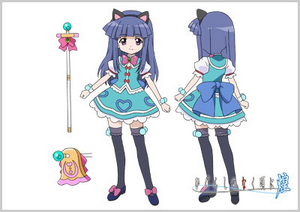 Rika as a teen 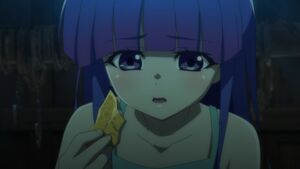