Leader
Riki was a character in Ginga Densetsu Riki and Ginga Nagareboshi Gin. He was Gin's father, Weed, Yukimura, and Joe's grandfather, and Orion, Sirius, Rigel, and Bellatrix's great-grandfather.

He was voiced by Banjō Ginga.

He is a red Akita Inu/Kishu Inu mix with blue eyes and many scars around his body.

Riki is the smallest one and the only one with the red coat. Villagers visiting the Bizen family call Riki's "to the point".

When a month later, Gohē Takeda selects among the puppies the most suitable hunting dog, he is unlikely to take a look at Riki and choose his older brother who everyone liked to be the best puppy.

During the next three months, his siblings get new homes, but no one worries about Riki. This is not a treat for a puppy because he is very attached to his mother and did not want to get rid of him. The Bizen family decides to keep Riki and Yūjirō calling the puppy to Riki, which means strength, in the hope that the puppy would still grow strong.

Yamaha is only temporarily treated because her real owner, Yūjirō's big sister, had been severely ill and gave the dog a treat for her little brother.

One October day, Grandpa called and asked Yamabuki back. The family drives a car to Miyagi where sister lives, intending to give both Yamabuki and Riki sister a shareholder. However, the big sister is still in poor condition and the family still decides to keep Riki. The difference came from the shock, and at first it was just getting home. However, he slowed down and looked out instead, trying to remember the way to his mother.

As the night descended, cold rain started and the Ridge crept out. He goes on his way to get back to his mother. The puppy ran without hesitation, but after half a kilometer, his senses were with blood. Heiji and his small pack find Riki and attack him because they hate pet dogs.

At first, Riki fears and is subjected to evil hate, but then the courage wakes up inside him and he ventures to hit Heiji. Riki knew that he could not win the whole set of bones alone and run away. As a last resort, Riki jumps into the river, getting into power.

Next day, Riki wakes up from the beach and acquainted with a strange dog who had rescued him from this river and caught fish. The dog wonders Riki's wounds, and Riki says he has been attacked on his way to his mother. Rick begins to cry, and the dog tells her that he is bullied because he cries. The worm shows embellishness and wants to continue the journey, but then the dog explains to him that not only he is able to do it and that the right can not be without force.

The dog decides to leave when he finds Rikki to be alone. Riki wants to know the dog's name and this is what Shiro says. Riki realizes he is his dad, but not telling him that this guy is. He did not want his father to know he was a runt. At the invitation of his father, Riki returns home and begins to eat food with great desire to grow bigger and stronger.

The month goes by and the six-month-old Riki decides to try again to meet his mother. On the way, however, he sees how the truck hits a Daisuke 3-year-old and starts to call on help. Heij's packs comes out of the sound and attacks Daisuke. Riki defends the boy with the threat of his life and fights against wild dogs, and even succeeds in breaking the heif to the rib. Wild dogs amaze the puppy's skills.

Then Gohē and Shiro come to the scene. Shiro acknowledges knowing that Riki is his son and praises his achievement. As a result of this, Riki became famous and he got his own way to run free. The crime became Daisuke's good friend.

Every morning, Riki folded over a hundred miles to his mother. Even though he had grown stronger and more courageous, he was still lost to the attention of his mother. They left him in peace, fear of the puppy's talents and this famous father.

Three-year-old Riki is on her way to his mother and finds his in the ambulance and she understands something is wrong.

Gohē hunting dogs go to chase the Akakabuto that has been attacked by humans. Shiro denies Ricky to come in, but he still follows.

Akakabuto scratches Gohe and Shiro is ready to sacrifice for his master, when Riki suddenly appears and attacks the bear's forehead. Shiro is surprised to see his son and attack himself with a bear. Other dogs are also attacking, and at the same time Gohē tries to reach for a weapon that dropped from him when the bear struck him. Riki realizes what Gohē is trying and taking a gun for this. Gohē shoots Akakabuto's right eye breaks and the bear attacks Shiro. Shiro is ready to sacrifice himself, and the woods of the spears thrive both on himself and on the Akakabuto rocks, when Riki looks at the side.

After that, Riki runs back to the village to seek help. Gohē escaped and Riki became his new hunting dog.

He was believed killed in the beginning of the series by Akakabuto when he threw Riki off a cliff, but survived and had amnesia, becoming the leader of a pack of wild dogs. He was killed in the final battle by Akakabuto, when the bear slashed him open with his claws, but not before regaining his memories. In the manga it is revealed that he learned the Zetsu Tenrou Battouga from a wolf Hakkenshi (八犬士 Eight Canine Warriors?) named Fuuga, and upon his death, warns Gin never to use it again, because he fears the wolves will come after him. 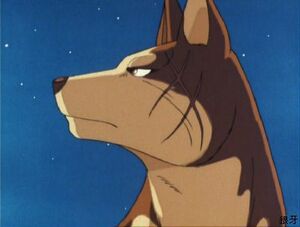 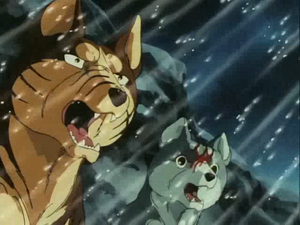 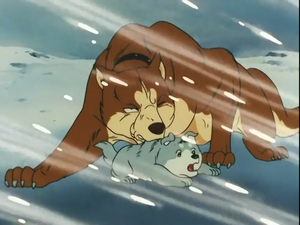 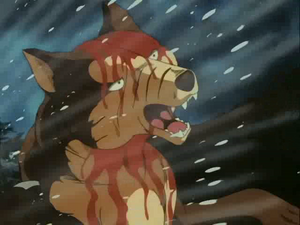 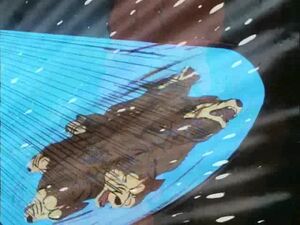 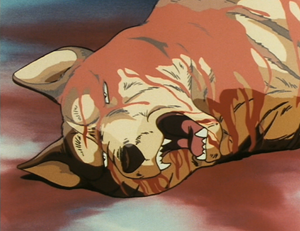 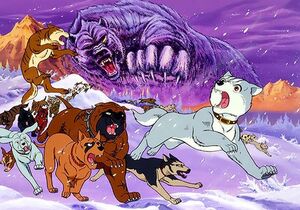 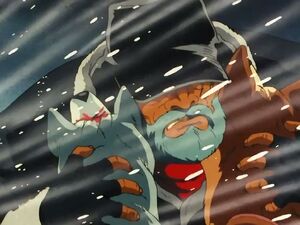 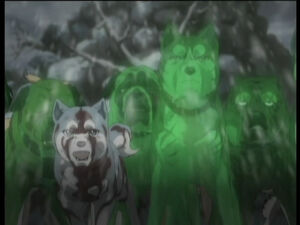 Retrieved from "https://hero.fandom.com/wiki/Riki_(Ginga_Nagareboshi_Gin)?oldid=1813913"
Community content is available under CC-BY-SA unless otherwise noted.