Start a Wiki
Izayoi Riko (十六夜 リコ Riko) is one of the two main characters of Mahou Tsukai Pretty Cure!. She is a thirteen year old girl from the witch world who is rather weak with magic. Riko's alter ego is the legendary Cure Magical (キュアマジカル Kyua Majikaru).

As Cure Magical, her hair lengthens to her back and becomes purple. She also has two wing-like twintails held up in a red bow. Her witch hat is black with a star on it and a light purple frill under it. There is also a string of gold beads with a star and a pink pom-pom at the end. Her dress is purple with a dark purple collar and midsection with two pink and yellow bows. On the top there is a light purple jewel with a red ribbon at the bottom with a white wing-like lining on top and a red bow in the back. She also wears a light yellow cape that reaches her back. Her gloves are purplish-black and reach her elbows as well as purplish-black boots with purple toetips. Like Cure Miracle, she also wears gold bracelets.

In her Ruby Style form, she wears a red and black dress with long red sleeves that are trimmed with white fluff. She has a red and white bow with a ruby stone in the center on her chest with pink bows on each side of her waist. There is a red skirt underneath. She also wears dark red leg warmers and red shoes with stars decorated on them. Her hair is styled in twintails tied with red ribbons.

In her Sapphire Style form, her hair is styled in a ponytail with a braid around her head. It also has a light blue streak with stars decorating it. Her hat has two red feathers jutting from it. The top is dark blue with a blue and light blue-layered skirt with a purple/pink gradient skirt underneath. Around her waist is two belts with a star and a pearl. She also wears a blue sleeveless coat with a light blue ribbon with a sapphire in the center with a gold tassel hanging from it. The bottom also has tassels at the ends. Her arm warmers are blue and reach her upper arm and has a light blue wrap around her arms. She also wears blue sandals and leg warmers.

In her Topaz Style form, her hair is styled in huge braids in the back and she wears a hat that looks like pudding. Her dress is yellow and orange with a dark orange bow with a topaz in the center on her chest. The skirt has light pink frosting-like ribbons around it. The orange-brown belt is similar to Cure Twinkle's. The skirt underneath is similar to Cure Miracle's in this form. She also wears flowing orange wristbands with a frosting dollop at the ends. Her boots are long and are orange and dark red with fluffy light yellow ankle bands.

Riko is a thirteen year old girl who attends a school in the magic world. She is great at studying but her magic is quite weak due to her ability of using it, this makes her hope to become a respectable witch sometime in the future. When she lives with Mirai, her life becomes a little less worrisome and more bright. 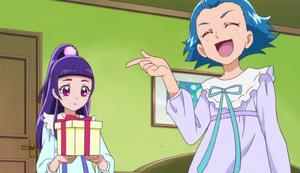 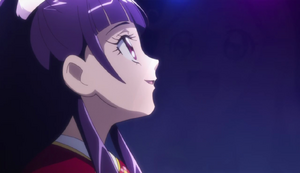 Riko watches the fireworks
Add a photo to this gallery 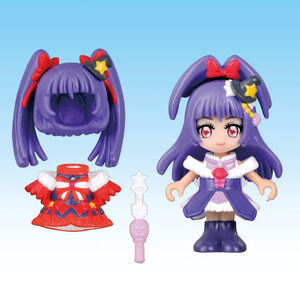 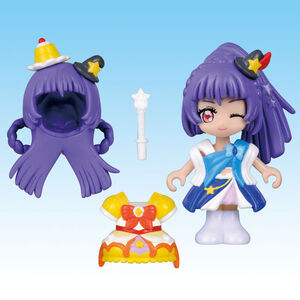 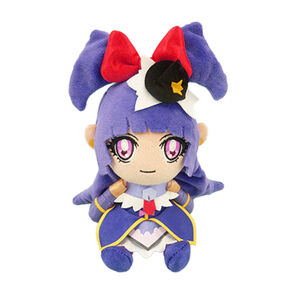 Retrieved from "https://hero.fandom.com/wiki/Riko_Izayoi?oldid=1686673"
Community content is available under CC-BY-SA unless otherwise noted.