Come out of her ancestor's shadow.
Defeat Vlad Dracula. (both succeeded)

Tragic Anti-Heroine, Femme Fatale, Thief, Trickster
Riko Mine Lupin IV is one of the main protagonists of the light novel and anime series Aria The Scarlet Ammo, as well as a redeemed antagonist. She is a female student at Tokyo Butei High School, former operative of IU, and member of Team Baskerville. Despite being a Rank A in the Inquesta department, she's ironically known as the biggest idiot of her class due to her constantly sleeping during lectures. However, this is just a façade she puts on to hide her status as a master thief, and the descendant of Arsene Lupin.

Riko is very short, around the same height as Aria at 147 cm (4'10"). She has long, blonde hair that falls below her waist and has twin tails styled on the side of her head. Despite having an overall appearance similar to Aria's, Riko's bust is considerably larger than Aria's (much to Aria's jealousy).

Her regular clothing is a typical Butei uniform modified to a gothic lolita style. Outside of campus, she enjoys cosplaying as maids, cats, ect.

Typically, Riko is a scatter-brained and playful girl, which includes giving nicknames to others (Kinji as Ki-kun, Reki as Rekyu, etc.). She is also one of the few people who knows Kinji's secret, resulting in her love of sexually teasing him in order to activate it. In addition, she has a tendency to speak in third person.

Riko has a fondness for fancy clothing, especially that of Gothic lolita. Also, she is a major otaku and loves playing dating sim video games to the point where she regularly attends comikets and often puts things into dating sim terms.

During tough situations, Riko breaks this facade, which Kinjicalls this side of her personality "Dark Riko". With the facade removed she uses rough language, her eyes emit an intimidating glare, and refers to Aria as Holmes (French: Olmes) instead of Aria. Her typically elegant fighting style becomes vicious and her blood lust spikes tremendously.

Riko attended Tokyo Butei High school two years ago. Rank specialized subject in the detective department A. It belongs to the team "Basukabiru". She is adept at information, manipulation and collection and disguises, change in voice surgery. We have signed the island giraffe and war sisters contract when one year.

Riko has long blonde hair and and the length of it is 147 cm to-side-up, naturally curly hair is characterized by baby-faced of loose girl. From Riko fan of Sakuchu, and is revered as Lori face big tits. I'm wearing a uniform of Butei High school In non-lethal modifications uniforms full of frills. We usually play the fool character, but nature is a ruthless, when it comes to UraRiko (approximate designation) to become sharp guy tone. One person to know that approximation is HSS. Also, it has a strong rivalry against Aria catching the blood of Holmes.

Her real name is Riko Mine, Ryupan IV. She is the great-grandchild of large Thief Arsene Ryupan of France, but does not inherit all the makings of ancestors. Ryupan home since losing her parents at an early age to downfall. Even Riko herself is picked up by Vlad, grew up being imprisoned and trapped in Romania as a tool in order to give birth to 5 II that may express the ability by the atavistic. Therefore hate violently to be called "Ryupan IV", it is polished herself as Mine Riko individual. Also from the fact that it is placed in even impermissible environment to wear the clothes, it is obsessed with fashion.

After she escaped and found Vlad that even came chasing her refuge in the "Lee Wu", in response to the condition that "to exchange for more than primary Ryupan defeat Holmes descendant, his release", "Butei Killing was "to cause the incident. So Aria to confrontation was also defeated, "Lee Wu" forced to leave the, came back to again detective department by the appearance and plea to the police [Note 15]. Then recover from Vlad the house later cross the in cooperation with approximate and Aria. Although it becomes caught be disturbed to Vlad that appeared to be trying to capture again, and asked for help to approximate and Aria and discard the pride, catch down to cooperate with three people to Vlad. Resulting in the fact that it was beyond primary Ryupan, it acknowledges the Aria and equal rival. At this time, I began to feel a clear favor that it is encouraged to approximation.

After that daily relationship can come to play well in the room of the approximation, and can be approached to go out or love consult together with the Aria is good.

In influential enough to hunt down an approximation and Aria of Hysteria mode by one person, and Ayatsureru freely hair by wearing a blue cross (which was received from the mother as a birthday present of 5 years of age), including Iro-kin of trace It has the ability.

In addition, there is also a bomb Tsukai, at the time of the "Butei Killing" incident, have planted the plastic explosives in bus of bicycles and High school approximate. In Hilda game I'm also using gas bomb here was using. Mobile weapon, two Tactical knife and 2-chome of Walther P99. A knife in the hair, it is possible to have a gun with both hands, and self-proclaimed the same "So sword twin gun," said Aria. Winchester Other was cut short barrel M1887, also owns Dillinger mother's keepsake. Frilly remodeling uniforms also will parachute when spread. It has in the hair two of Kodachi of Aria in Hilda game, you are showing off a bi-sword twin gun anomalous version with both hands the Sukurama Saxe and Beretta approximate.

Car it was remodeled to Muto, Vespa {this Vespa put out up to 150 kilometers per hour is Mamiya lights were used in AA3 volumes.

She joined at the end of 40 episodes of meet and IS High School team route, it is possible to operate. 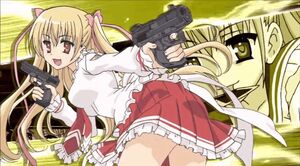 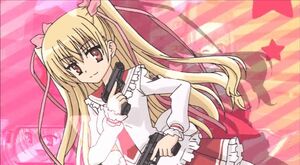 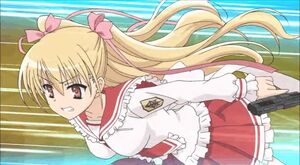 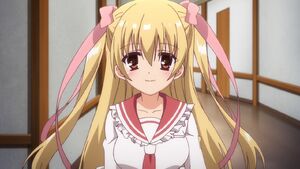