Dark Mode
Control over darkness and minor Heartless summoning abilities, ability to use the Keyblade

Find and return Kairi's heart to her.
Protect Sora and Kairi from himself.
See all the worlds.
Become a Keyblade master (succeeded).
Maintain full control of his dark side (succeeded).
Defeat Xehanort (succeeded).

Riku is the deuteragonist in the Kingdom Hearts series. He is Sora's best friend, but also his main rival.

Terra meets a young Sora and Riku on Destiny Islands, and chooses the latter as his successor to wield the Keyblade. They later meet Aqua, who finds that the friendship between them is similar to the one between her, Terra and Ventus. Sometime after that, Sora and Riku are resting on the beach. When they are about to head home, Riku sees Sora shed a tear, and thinks that someone from another world (Ventus) is sad and recommends that Sora try to reach out to him.

Now 15 years old, Riku desires to leave the islands with Kairi and Sora on a raft and see other worlds. The night before they were to depart, Riku's curiosity got the better of him and he opened up the door in the secret place which lead to the Heartless attacking his world. He is later found by Sora, indifferent to the Heartless invasion and desires to take advantage of them to see other worlds and opens his heart to darkness and attempts to take Sora with him. Unknown to Riku, at this critical moment the Keyblade Terra promised Riku arrives, but due to Riku have given in to the darkness, it deemed him unworthy and so chose Sora as its wielder, saving him from being pulled into the darkness.

Riku awakens on the world known as Hollow Bastian and is found by Maleficent, who offers him shelter and protection and he gains the darkness-wielding sword Soul Eater. Maleficent offers to help him find his friends if he helps her find the remaining Princesses of Heart and begins to manipulate him to her side.  Riku finally comes across Sora in Traverse Town, though finds that he has new friends in Donald and Goofy as well as gaining a Keyblade, which he silently recognizes as the one meant for him and suddenly leaves with the three aren't looking. Meeting with Maleficent, she turns him against Sora by telling him that his friend has simply replaced him and Kairi with Donald and Goofy, though he remains suspicious of her motives.

Regardless, he joins her in her schemes, kidnaps Jasmine from Agrabah and takes her to Hollow Bastian, and in exchange, Maleficent reveals Kairi's location, the world of Neverland, though she has lost her heart. Seeking a way to save Kairi's heart, Riku enters the whale Monstro to get to the puppet Pinocchio but finds Sora is there also, and while they work together to save Pinocchio from a Heartless, Riku kidnaps the puppet afterwards and asks Sora to join him in saving Kairi, but Sora refuses as he knows Riku is in the wrong. When the Heartless returns, Riku abandons Pinocchio and flees.

Maleficent bestows Riku with the powers of darkness and gives him the ability to control the Heartless before he sets out with Captain Hook to Neverland to retrieve Kairi, though finds Sora has caught up to him again. He creates a Heartless duplicate of Sora and traps him below deck. After informing Hook that Wendy isn't a Princess of Heart, he uses the power of darkness to transport him and Kairi back to Hollow Bastion and Maleficent unlocks further darkness in his heart.

Riku confronts Beast in the outskirts of Hollow Bastion, mocking him for trying to save Belle before wounding him, but is stopped from finishing him by Sora. Riku reveals he has been waiting for Sora and uses the strength his heart has gained from darkness to take the Keyblade from Sora and reveals himself as the true chosen one of the Keyblade, writing Sora off as a delivery boy and leaves him with an old toy sword to make do with before leaving with Donald and Goofy who, as per their king's order, must follow the key.

As a result of his heightened darkness, Riku takes on a new form by the time Sora catches up with him in the entrance of the castle, and when Sora refuses to leave without Kairi, Riku attacks him but Donald and Goofy rise to his defense. This causes Sora to realize his real strength wasn't the keyblade but his friends he has made over his journey and he doesn't need the Keyblade to keep fighting. The realization makes Sora's heart stronger than Riku's darkness and the Keyblade completely abandons him and fully accepts Sora. Defeated, Riku flees and is confused and outraged over how his Keyblade could abandon him and a figure appears to him, promising to make him stronger if he plunges into the darkness and possesses him when he does so. As a result, Riku gains a new Keyblade made of the hearts of six of the Princesses.

Rejoining Maleficent, he warns her of the dangers of the darkness and after she is defeated by darkness, he reveals his Keyblade has the power to unlock a person's heart and forcefully does so to Maleficent, turning her into a dragon. Sora catches up with the possessed Riku in the Keyhole room and its revealed Riku is possessed by Ansem, the Seeker of Darkness, and that not only is Kairi a Princess of Heart but her heart is within Sora's and it must be retrieved if she is to awaken and complete the Keyhole. After his defeat he fades away and as intended, Sora unlocks his heart with his discarded Keyblade which awakens Kairi and finishes the Keyhole. Ansem then modifies Riku's form to resemble his and sends the Heartless after them, but Riku holds him back long enough for the others to escape. To prevent further actions in the future, Ansem banishes Riku's heart out of his body and into the Realm of Darkness.

Riku traveled throughout the basement area of Castle Oblivion. During Marluxia's attempted coup against Organization XIII, while Sora fought against Marluxia's traitor faction, Riku fought against Zexion's group of loyalists. He would also battle the Riku Replica a number of times. He later meets The King and DiZ. He finally defeated Ansem, whose shadow still lingered in his heart after his defeat in Kingdom Hearts, and began his quest to control his darkness and help Sora awaken.

Riku keeps track of Roxas, Sora, and the Nobodies in the Simulated Twilight Town in his Ansem form. He meets the Emperor and battles Sora in the Land of Dragons. He becomes his old form and works with Sora, Donald, and Goofy to defeat Xemnas and return home with his friends.

Riku teams up with DiZ to help Sora awaken. He defeats Xion and calls her Keyblade a sham. He has Xion decide what to do. DiZ eventually gets fed up with the delays, and has Riku capture Roxas, sends Roxas to the Simulated Twilight Town, and waits for Sora to awaken.

When Jiminy's Journal is digitized, a data version of Riku is created to act as a vessel for the memories in it. In the ending cutscene, Sora and the real Riku are on Destiny Islands talking about how small their homeworld is, and then about the Door to Light. Kairi then arrives and gives them a letter sent to them by Mickey, and they read it together.

After reading the letter, Riku asks him if he's decided whether to go and search for the people connected to him. He replies that he has, which makes Riku smile.

Sora and Riku are made by Yen Sid to undertake the Mark of Mastery exam to prepare them for the impending return of Master Xehanort. For their test, they are sent to the Sleeping Worlds, worlds formerly consumed by darkness that haven't yet awakened after their restoration, which they are supposed to wake up. On his journey, Riku encounters Ansem, Seeker of Darkness and a mysterious young man with ties to Master Xehanort several times, and they try to make him succumb to the darkness.

Once all the Sleeping Keyholes are sealed, Sora becomes trapped in a state of sleep in The World That Never Was. Riku comes to save him, and finds him comatose due to his heart having been damaged by Xemnas and the mysterious young man, who is revealed to be a younger version of Xehanort from another timeline. Riku defeats the Anti Black Coat in Sora's nightmare, continues to progress through the castle, and eventually encounters Ansem, who tells him that he is a Dream Eater. Riku defeats him and then finds Sora in Where Nothing Gathers, about to be made a vessel for Xehanort's heart.

Riku is able to save Sora with the help of Lea, but he still remains comatose and is brought by Riku to Yen Sid's Tower, where he enter Sora's body so he can repair his shattered heart. Inside, he has to fight the Armored Ventus Nightmare, which is Sora trapped inside Ventus's Nightmare-possessed Keyblade Armor. After defeating it, Riku goes deeper into Sora's heart and enters a memory of Destiny Islands, where he meets illusions of Roxas, Xion and Ventus, who each ask him a question. After he answers all three of them, he comes across a bottle and meets another illusion, this time of Ansem the Wise. The illusion tells him that he hid hid his research data inside Sora before he fell asleep, and that defeating the Nightmare and answering the other illusions' questions has awakened Sora. He then returns to the real world, reunites with everyone, and is named a Keyblade Master by Yen Sid. He and the others are shocked when Lea tells them that he plans to become a Keyblade Master too and summons his own Keyblade by accident.

Yen Sid then gives Riku his first duty as a Keyblade Master; to bring Kairi to him so she can receive training in using her Keyblade so that she can join in the battle against the New Organization XIII.

After Riku brings Kairi to Yen Sid's Tower, he listens as Yen Sid tells them of his plan for protecting the other six Princesses of Heart and for saving Terra, Ventus and Aqua. Mickey reveals that he and Aqua were together when the Door to Darkness was closed, but she stayed in the Realm of Darkness to stop Riku from being attacked by a swarm of Heartless. Riku asks him why he kept it a secret until now, but Yen Sid reveals that he forbade Mickey from telling telling anyone because he was afraid that Sora would make a reckless attempt at rescuing Aqua, but that both he and Riku are now strong enough to do so successfully. When Kairi is apprehensive about her training with Lea (because of he's the human form of Axel, who kidnapped her before), Riku and Mickey assure her of his trustworthiness, telling her that he saved Sora before. Yen Sid then gives Riku and Mickey new clothes made by Flora, Fauna and Merryweather, which are meant to protect from the darkness in the dark realm, and set out on their way to save Aqua. 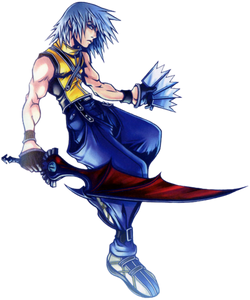 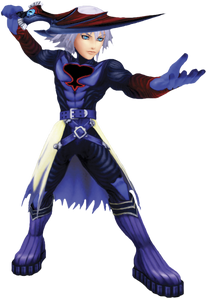 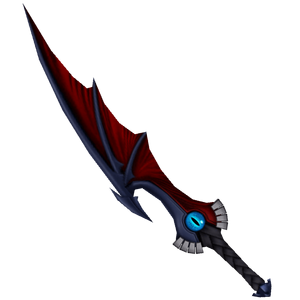 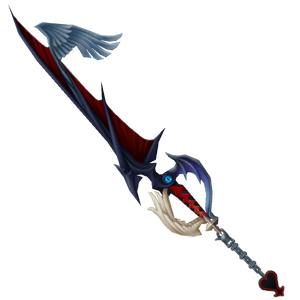 Riku's Way to the Dawn. 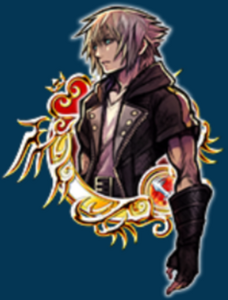 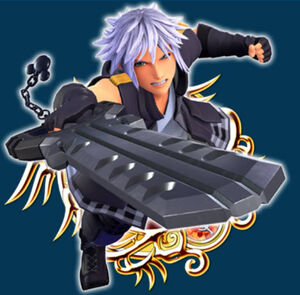 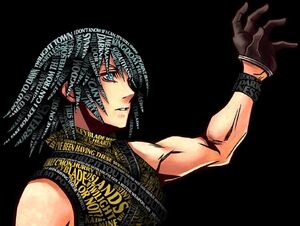 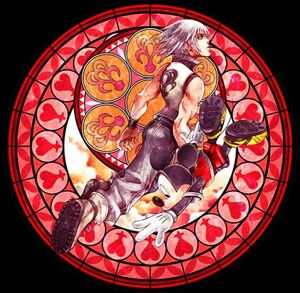 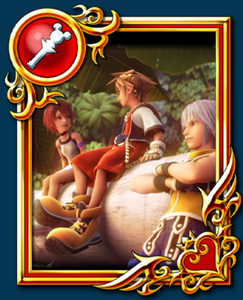 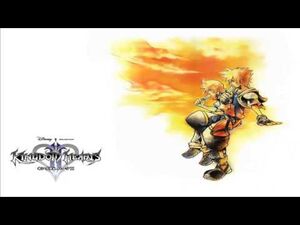 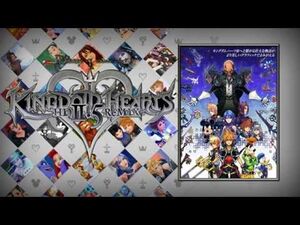 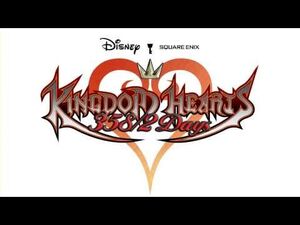 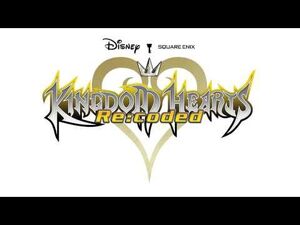