Monkey (by her parents)

Happy Girl (by her parents)

Get back to Minnesota (formerly).

Riley Elphaba Andersen is one of the tetartagonists in the 2015 Pixar film, Inside Out. She is a 12-year old girl who loves hockey and sports. Riley was uprooted from her happy and simple life in Minnesota and taken to San Francisco, where she experiences various changes in her life. Her emotions are Fear, Sadness, Joy, Disgust and Anger. At the beginning of the movie, she's 11 years old, but by the end of the film she's 12 years old.

She was voiced by Kaitlyn Dias.

Her parents think Riley got a date, because Jordan, a boy who she met at the hockey arena at the end of the film, comes to her house to pick her up, to her parents' surprise and shock. She also seems surprised by her parents' actions, particularly her mother using slang words (the idea of her emotions) but at the end of the short movie, her dad seems to like Jordan because they have the same interest for music.

Riley is a very convoluted person. Her primary impulses come from her conflicting emotional state over the stress of the changing of her life, such as her entire family moving away and starting anew while leaving all of her friends in Minnesota. Riley comes off as being rash and neurotic however she is normally chipper and enthusiastic but was capable of quick anger and sharp jealousy.

However most of Riley's troubles come from the fact that she took it to repress her sadness after her parents moved away. Despite wanting to be her parents' "happy little girl", Riley was monumentally moody over her life changing but felt as though she couldn't express herself to her parents, making her feel even more trapped. Riley's emotional side becomes more expressive at her days at her new school, even crying in front of her entire class over a happy-sad memory.

Riley was also capable of white-hot anger as well. She appears to be temperamental however this is somewhat reared to her dad and normally expressing her discomforts towards her father; although she feels she can't express her discomfort towards him she is still quite comfortable. Riley appears to have an envious side such as bitingly rejecting her friend after she got a brand new friend and felt as though she was being replaced.

However as she began to open up to her parents and finally express her sadness, she becomes more comfortable with her environment and becomes more accepting of San Francisco, even making newer friends, and as she was able to get her life in order her emotions become much more clearer and focused.

Riley is an avid hockey lover as well, enjoying to play a game with her friends at Minnesota, however in San Francisco she becomes less attracted to the sport but eventually decided to reconnect with the sport after getting her life sorted in the end.

While this isn't outright stated in the movie, it's clear that Riley is a high-functioning autistic. She displays the typical signs of someone on the spectrum of autism, and her hardships coincide with the hardships of those who have autism or anxiety problems. 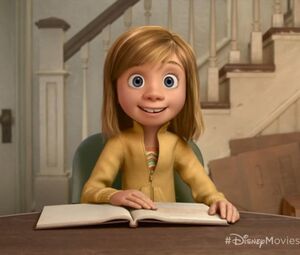 Riley making a scene at the dinner table, causing her dad to feel offended by this and be very angry with her.

Riley getting sent to her room by an angry Bill for making a scene at the dinner table.

Riley reuniting with her parents. 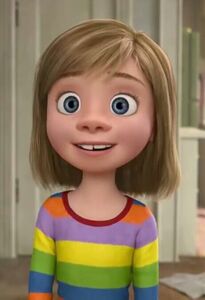 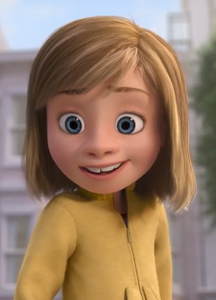 Riley when she was a baby