That Time I Got Reincarnated as a Slime

Ruler of the Jura Tempest Federation

Partying and hanging out with his friends.
Eating.

Create a thriving nation for himself and his friends (ongoing).

"Great Demon Lord" Rimuru Tempest 「"大魔王" リムル・テンペスト, "Dai Maō" Rimuru Tenpesuto」, formerly known as Satoru Mikami, is the main protagonist of That Time I Got Reincarnated as a Slime.

A partner and best friend of the True Dragon Veldora Tempest, Rimuru is the founder and King of the monster country Tempest of the Jura Forest. He is regarded as one of the strongest Demon Lords among the mighty Eight Star Demon Lords and also the only proper Great Demon Lord currently.

He is voiced in Japanese by Miho Okasaki and in English by Brittney Karbowski.

He has a kind heart and a quirky personality. Even though he is quite laid back and wants to avoid troublesome situations as much as possible, he actually works very diligently when there is a task needed to be taken care of.

With the heart of a hardworking salaryman and a beloved senior co-worker, Rimuru has a hard time rejecting someone if they plead him to help, leading in him often ending up with more work than he can handle, which his boss from his previous life used to reprimand him for.

Being the very Satoru Mikami himself, he also believes himself to be a KY-persjuston (Kuuki Yomenai) who makes jokes at the wrong time.

Rimuru tends to react very severely when there's a danger to his close ones, such as his countrymen, subordinates, (possibly due to the soul-link he shares with them), good friends, and students (he can't stand children suffering). One might say he overreacts to these cases, but it simply shows how deeply he cares for them, as a stark contrast with his usual cheerful self.

He has no problems with decimating any forces who dare to harm his subordinates and his country, regardless of their numbers, realizing full-well about the deed he's done.

After a mishap of subsidies, Rimuru tends to quickly revert back to his laid back self and mentally (or even in actuality) scratches his head at the scenery he caused.

He is described as cautious and cunning by other fellow Demon Lords, unaware that it is simply a means of him trying to prevent troublesome situations from going out of hand. As he progresses through the story, he slowly becomes more and more like an actual Demon Lord, and as he adjusts to the rules of the new world and understands the capabilities of his subordinates, he begins to let them handle tough situations on their own instead of voluntarily diving in first to patch stuff up.

Thanks to his dying words as Satoru, Rimuru was granted many advantages in his new life by the Voice of the World; thus why he became a slime instead of a human. His magical power is also enhanced thanks to being named by Veldora, and sharing a family name with him. Upon his evolution to Demon Lord, Rimuru's magic multiplied by ten times. 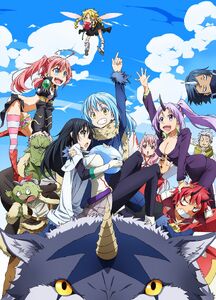 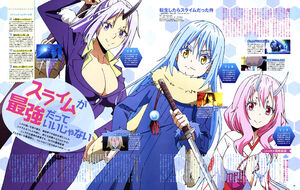 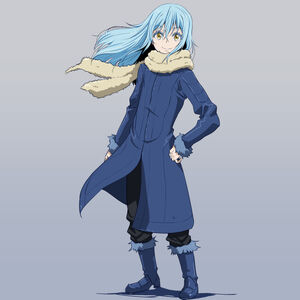