Optimistic Priest
Rimururu is one of the minor protagonists from Samurai Shodown series of fighting games.

Referred to as a priestess of the Ainu religion, she greatly admires her older sister, and like her, strives to protect nature. In her ending to Samurai Shodown V, it is revealed to players that Nakoruru adopts her at a young age. Although she is still training and not as adept as her sister at fighting, she repels evil from the forest for her elder sister. When her sister departs, Rimururu often follows her in hopes of offering assistance. In Samurai Shodown III, she somewhat misread the evil presence in the land to be Amakusa and pursed him. Nakoruru originally forbids her younger sister's attempts to be a priestess but relents once she recognizes Rimururu's resolve.

In Samurai Shodown: Warriors Rage, Rimururu is a "Maiden of Light" like her sister. She was imprisoned by Oboro twenty years ago and cannot awaken to help her sister. The players need to rescue Rimururu for Nakoruru. When the sisters unite, they seal Oboro and his weaponry after his defeat.

Her resolve as priestess is shaken in Sen as she can't hear Nature's voice anymore. Determined to not make her sister worry, Rimururu leaves her home with hopes to find the reasoning on her own.

Before the events of the game occur, she left her home on a year-long training journey with hopes to be stronger for her sister. When she returns, she spots Mikato and disapproves of the girl's presence. She eventually accepts Mikato to not upset her sister. Since then, Rimururu usually drags the girl along for her village pranks and other acts of mischief, and she also acts as another mentor for Mikato by pridefully informing her of various village traditions. When Mizuki attacks the village, she pleads to join her sister in defending it. However, Nakoruru tells her to remain in the village to protect their home and Rimururu reluctantly obeys. In the game's epilogue, she seems to leave on another adventure.

Rimururu idolizes her sister and wants to be like her every way possible. Just like any teenager, Rimururu is cheerful and is always seen smiling. Although she always offers to help her sister, she is often left in the dark about her sister's personal problems.

With her ice spirit Konru, sometimes translated as "Konril", she has the ability to freeze her foes. Her normal attacks are similar to her sister with some modifications in execution. Unlike her sister, many of her moves are short range, giving her a narrower range of efficiency than her sister. However, this may not be a disadvantage as the swiftness in most of her moves make up for it. Like her sister, she may also reflect projectiles with proper timing. In Samurai Shodown 64-2, her Slash form relies more on Konru, making her playing style more defensive. Her Bust form, however, is more aggressive and the more close-ranged of the two.

While Konru is absent from Samurai Shodown Sen, Rimururu is still able to use her ice powers.

Her moves are written in the Ainu language. 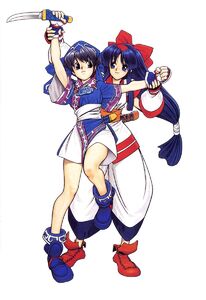 With her sister Nakoruru 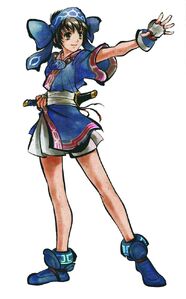 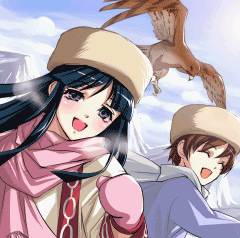 Rimururu in Days of Memories with Nakoruru 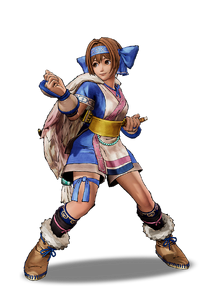 Retrieved from "https://hero.fandom.com/wiki/Rimururu?oldid=1750421"
Community content is available under CC-BY-SA unless otherwise noted.