Heroes Wiki
Register
Don't have an account?
Sign In
Advertisement
in: Yu-Gi-Oh! Heroes, Anime Heroes, In Love,
and 13 more

Rin (リン Rin) is a character in the Yu-Gi-Oh! ARC-V anime. She is the Synchro Dimension counterpart of Zuzu Boyle (from the Standard Dimension), Lulu Obsidian (from the Xyz Dimension), and Celina (from the Fusion Dimension).

She was voiced by Sarah Emi Bridcutt in Japanese and Emily Jenness in English.

Rin has shoulder length aqua green colored hair with two light green side tails and orange eyes. She wears a pair of blue studded earrings. Her outfit consist of a blue and white jacket with pink pads on the shoulders and elbows, pink shorts and white and pink boots that reach up to her thighs. Her hairstyle is also vaguely similar to Yūri's with a lock of hair sticking up over her head like Yuya. Like Zuzu, Celina and Lulu, she also wears a bracelet.

When at the orphanage, she wears a plain sleeveless pink shirt with a tiny deep pink ribbon on the chest area. Her Riding Duel outfit consists of a predominantly white one-piece short-sleeved jacket-miniskirt combination with light pink shoulder pads and hot pink markings, in addition to back pockets; long white gloves with light pink elbow pads that extend over her elbows, hot pink pants, and white knee-length form-fitting boots with light pink kneepads.

According to Yugo, Rin acts a lot like mother to him. She often reprimanded him for doing things he shouldn't be doing, much like how a mother would scold her child, something that sometimes annoys Yugo. She also always scolds Yugo for his tendency to talk carelessly without thinking of how other people feels. Nevertheless, she is very close with Yugo, who has feelings for her. 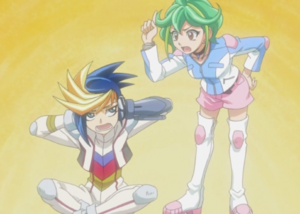 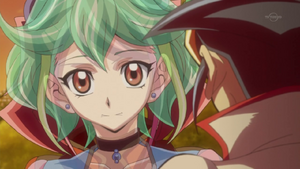 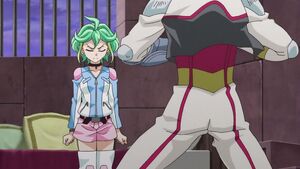 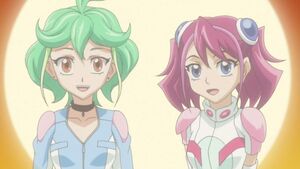 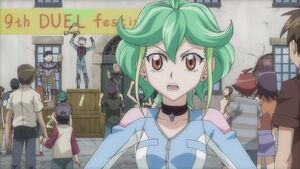 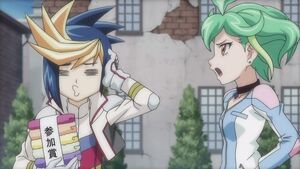