Being with Team Minato

Rin is a minor supporting character from the anime and manga Naruto. She was the female student of Minato Namikaze's squad along with young Kakashi and Obito Uchiha. Rin was also Obito's childhood friend and love interest.

She is voiced by Haruhi Nanao in the Japanese version who also voiced Mai Valentine in Yu-Gi-Oh!, while in the English version, she is voiced by Stephanie Sheh, who voiced Hinata.

She was a chunin level kunoichi and with medical ninja skills, and her team participated in the Third Shinobi World War.

Sometime later, she was killed by Kakashi, who pierced her chest with a chidori. She actually committed suicide after she was kidnapped and had the three-tails sealed in her body, turning her into a Jinchūriki. She also had a forbidden curse tag implanted in her so the tailed beast would be let loose as soon as her and Kakashi returned to the Hidden Leaf Village.

To prevent this from happening, Rin jumped in front of Kakashi's chidori when he was fighting shinobis from the mist that were attacking them. Kakashi was traumatized by this event that would haunt him for years. Obito also witnessed everything, and thought that Kakashi had betrayed him killing Rin, so he was consumed by grief and rage.

Rin's kidnapping was in reality part of Madara's plans to turn Obito into his pawn, so that he could accomplish his goals. Madara knew about Obito's feelings for Rin, and that it would be a good way to manipulate Obito to follow him if he was feeling betrayed and had the desire to take revenge on the ones who harmed her.

After her death, Rin stayed at the entrance to the Pure Land (afterlife), where she watched over Kakashi and Obito. When Obito died, Rin greeted him; teasing Obito for getting lost (in life). Obito asked Rin to wait a but longer before returning to the Living World as chakra to temporarily empower Kakashi to fight against Kaguya. 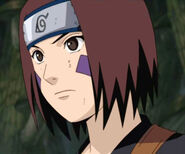