Become an Exorcist, Get revenge on Satan

Rin Okumura is the main protagonist of the manga/anime series Blue Exorcist. He and his younger twin brother, Yukio, were born from Satan and Yuri Egin. He attends the True Cross Academy to become an Exorcist and get revenge on Satan for killing his adoptive father, Shiro Fujimoto.

He is voiced by Nobuhiko Okamoto in the Japanese version of the anime and Bryce Papenbrook in the English version, the latter of whom also voices Shirou Emiya, Meliodas and Staz Charlie Blood.

His physical appearance is that of black hair (in the anime, it has a blue hue), which is a bit longer than that of Yukio's, and pale skin. While in his human form, Rin exhibits a number of physical traits that are signs of his demonic nature, such as sharper-looking teeth, slightly pointed ears, and a black, fur-tufted tail (he keeps it hidden under his shirt). As a demon, Rin gains two blue flames that look like horns floating above his head, long elf-like ears, and his pupils turn red while his irides remain bright blue. The blue flames also blaze around other places of his body, mostly at the tip of his tail.

Before going to the True Cross Academy, Rin was often seen wearing a blue hoodie, and a pair of black jeans with chains on the side, giving the impression of a rebellious nature. He was also seen wearing a white jacket with big pockets and various decorations on it and a pair of gloves. Because of how often he got into fights, Rin was seen with band-aids over his cheeks and fingers, which were usually taken care of by Yukio. While in True Cross Academy, Rin wears the school's uniform, which consists of a white shirt, a necktie, a black jacket, and black pants. He is also seen carrying around Kurikara. Also in class, he is sometimes seen with his bangs pinned up so he can read his studies.

Rin has a protective and supportive personality. He can be very violent and get into fights (possibly caused by his demon side), but really has a kind heart. He supports his friends and tries to encourage and help them. He also seems very protective of Yukio, and aims to surpass him one day. However, Yukio often finds Rin annoying due to his frequent impulsiveness and stupidity, which makes Yukio look down on Rin as much as up and makes it hard for Rin to be taken seriously by Yukio and even others, making Rin desperate to earn his brother's approval. He takes offence when Yukio accuses him of killing their father and pointing a gun at him, warning him not to insult him and saying that he isn't going to fight his brother.

Although he generally hides it, Rin loved his adopted father a great deal, and has nothing but good things to say about him. He deeply regrets that the last thing they did was fight, which resulted in Satan taking him over. Much like Yukio, he takes any insult against him very seriously, and got really angry when Shura claimed he died like a coward. He also doesn't like people insulting Yukio, who he loves and greatly respects. Besides this, however, Rin is surprisingly even-tempered and laid-back, and rarely gets angry without a good reason. This is shown when during one of their many arguments, Ryuji dares Rin to walk up to a nearby demon that is chained up for class and touch it without making it attack him to prove that he's serious about being an exorcist. Rin tells him no way, that he has no reason to risk his life for such a petty argument.

Rin is often shown to be able to relate to people easily and connect their feelings to his own, such as Shiemi Moriyama's grief over her grandmother and Ryūji Suguro's ambition to defeat Satan. He's also able to understand Shiemi's desperate desire for friends, as he grew up with almost no friends due to being constantly harassed by bullies and being called a demon. In general, he is often the first one to try and make people feel better if they're down. He's not the type of person for school or studying, though he was able to gain a junior high diploma and become an Exwire.

Unlike his brother, Rin is immature, which leads other people into believing that he is younger than Yukio; it's been noted by several people that despite being twins, he and Yukio couldn't possibly be more different. He is headstrong (literally as well as metaphorically, as he was able to stop a charging demon (Kuro) by directly headbutting it in the forehead) and is often very open with his friends. However, when his friends found out about his demon heritage, they become afraid of him, thinking that he is unstable which could lead to a disaster, but they slowly got used to him and accepted him during the Kyoto Arc.

Despite his usual hot-blooded, headstrong attitude, Rin is often shown to be more sensitive than he lets on, which is shown when he cries from reading an emotional drama manga. He is also shown to have a soft spot for animals. In the beginning of the manga, the reason he had gotten into a fight with Reiji Shiratori and his delinquent gang was because they were torturing pigeons. He also attempts (successfully) to tame Kuro without killing him after hearing that he was once Shiro's familiar.

Since childhood, Rin has been physically stronger than most normal people his age, even people several years older, most likely because of his demon heritage.

It is shown that he can easily lift a car, metal rollercoaster debris, and both his and Shura's backpacks which Shima ironically called demonic strength. As a young child he was even able to punch hard enough to bend metal, break glass, throw a chest full of toy as well as desks and chairs across a room, and with one punch break three of Shiro's ribs.

Because of his possession of Kurikara, he aims of becoming a Knight, a type of Exorcist who uses swords and other blades in combat. While he trains to get better in his swordsmanship, he mostly relies on his superhuman strength and blue flames in battle.

Rin wasn't a tamer because he doesn't summon demons.

Rin can tap into the power he has inherited from Satan through Kurikara, a blade that was used to seal his powers when he was born. The sheath also acts as a portal to Gehenna, the demon world, which when drawn, returns Rin to his demon form. In both his human and demon form, Rin can release incredibly destructive blue flames, which are the trademark of Satan. However, when he draws Kurikara, the magnitude of the flames drastically increases, as well as a decrease in Rin's control over them. Amaimon has stated in his second fight with Rin, that his powers are like Satan's. When Rin releases the blade, the greater magnitude of flames often leads to Rin being "consumed" by them, resulting in a berserker rage where he lose control and goes on a rampage, attacking everyone around him. However, Rin has been shown to stop himself in this form, but only with great difficulty. Before going to to fight the Impure King he is shown trying to draw Kurikara however this fails due to his lack of confidence in controlling his powers.

Rin has been shown to be able to use his sword and manipulate his blue flames through emotions, as he was seen saving Shiemi from falling debris by making a claw out of his blue flames. He can also release intense blue flames out of his sword when its swung with great power. Rin is currently learning how to manipulate the flames at will, allowing greater control and to prevent being consumed by its power. In the anime, Rin was able to control his flames properly, which he used to burn the webbings that trapped his fellow Exorcists including Yukio, Shura, and Suguro from the avengeful masked man. When Yukio awakened to his demonic nature, he and RIn combined their power which forms into a large phoenix out of blue flames. Using this form, the brothers were able to fly into the air and destroy a huge Gehenna Gate that was attacking the city (which was also created combining Rin and Yukio's blood). Rin is imprevious to Satan's blue flames.

In addition, through his demon powers, his body has shown to have high-speed regenerative abilities. Rin has mentioned that as a child, he always healed very quickly, which he had initially thought was due to his brother Yukio's skills at bandaging him up. His healing rate is so fast that, after getting stabbed in the stomach, he lifted up his shirt only seconds after and showed Yukio that the wound was already closing itself up. He is also immune to the effects of miasma or other energy-draining substances created by demons that would otherwise cause great harm to normal humans.

Rin can communicate with demons that are incapable of human speech, such as he was able to hear Kuro's thoughts. In the anime, he also understood what Ukobach was saying.

Due to practicing from a early age, Rin is an amazing cook. He displayed this in a cook-battle against Ukobach and when baking a birthday cake for Izumo and when he made lunchboxes for him and Yukio.

Rin as a human, before his transformation 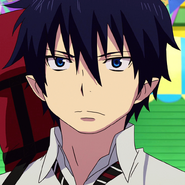 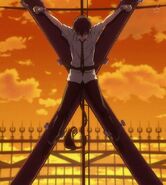 Rin as an Infant 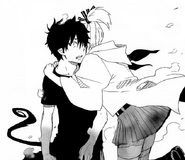 Rin being embraced by Shiemi
Add a photo to this gallery
Retrieved from "https://hero.fandom.com/wiki/Rin_Okumura?oldid=1895078"
Community content is available under CC-BY-SA unless otherwise noted.