Peeing on things and donuts.

Parody/Homage Monster
Ripley, or The Alien Dog, is a minor character from the 2009 movie Planet 51. He is an alien animal in space throughout Planet 51.

He is voiced by Frank Welker who also voices Scooby-Doo in multiple outlets, Fred Jones, Garfield, Abu, Bronx, and many others.

Ripley appears for the first time in the opening sequence of the film, where he is being walked by his owner and urinates on a lamppost with his acid urine and ends up destroying that lamppost.

After astronaut Chuck lands on planet 51 and he tries to hide and then runs into the alien dog Ripley and Ripley barks at Chuck and Chuck tries to make Ripley not make noise so no one hears him, but then Ripley with his second tongue holds Chuck's helmet while he licks Chuck's helmet, then Ripley chases after Chuck but Chuck manages to get rid of Ripley on the way.

Later a Mailman comes to deliver letters to different houses and arrives at Ripley's owner's house and the Mailman finds Ripley chained to his house, then the Mailman tricks the chained dog with a donut and he calls him "silly dog", Ripley angered by the Mailman's deception with the donut, he uses his acid urine to free himself from his chain and then chases after the Mailman and attacks him and ends up stealing his bag with messages.

Then Ripley meets Rover and the two become friends and Ripley lets Rover stroke her belly, then Rover hides from soldiers Vesklin and Vernkot who are looking for astronaut Chuck and the two soldiers only meet the dog Ripley who he scratches his butt on the ground which makes the two soldiers find it amusing.

In the end when Chuck says goodbye and takes off in his spaceship to return to earth in the Odyssey command module, he does not realize that the alien dog Ripley was placed inside his spaceship since he was released from the leash. his owner with his acid urine, Chuck realizes that he no longer has time to return the alien dog to planet 51 because the Odyssey command module is already leaving for Earth with him and so he agrees that Ripley will accompany him during his long journey down to the ground as he complains about Ripley's drooling toward him.

Ripley is a very naughty alien dog since he loves to urinate on things while those things burn and melt from his acid urine, Ripley will only attack those who were mean to him, such is the case of the Mailman who deceived him by giving him a donut, it seems that Ripley has a good friendship with Rover as the two get along very well. 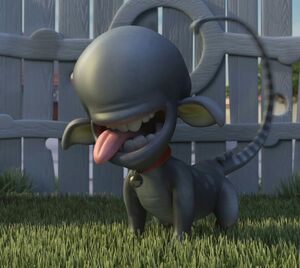 Ripley urinates on a lamppost.

Ripley happily sticking out his tongue.

Ripley being walked by his owner.

Ripley chained by his house.

Ripley very angry at the Mailman for his deception.

Ripley uses his acid urine to free himself from his chain to chase down the Mailman.

Ripley smiles before attacking the Mailman.

Ripley along with Rover

Ripley scratches his butt on the ground.

Ripley licks the window of Chuck's ship with his second tongue.