Finding food, hanging out with Hugo

To help Hugo to get back home (1st movie, succeeded)

Friend of the Hero
Rita is a young female red fox and the deuteragonist in the Jungledyret Hugo series. She is the character who rescued Hugo the Jungle Animal from the humans who followed him in hot pursuit. She is also Hugo's love interest.

She was voiced by Kaya Brüel in the original dub and Holly Gauthier-Frankel in the english dub.

Hugo meets Rita after the city zoo closes for the night; noticing that he is a new arrival, Rita introduces herself and briefly describes her family, explaining that while her mother hunts for food she explores the city. Hugo quickly develops a crush, but they are interrupted when Conrad Cupmann breaks into the zoo and Rita flees the scene.

Hugo re-encounters Rita the following evening while venturing through the city. He helps her to raid a dumpster for food, but is put off by rotten leftovers, to which she suggests a restaurant that throws its leftovers out to stray cats. Against her warnings Hugo confronts the cats, and after he unwittingly antagonizes them she helps him escape on a skateboard found earlier. After they get away she angrily rebukes his recklessness and selfishness, but agrees to take him to her home and persuades her mother to let him stay for the rest of the day. She asks Hugo about life in the jungle and concludes it must be "awesome", but declines his offer to follow him back for fear of its dangerous wildlife. By now Rita reciprocates Hugo's affection, and suggests they find a home for him in the city so they can play together at night.

That evening, Rita proposes they go to the harbour themselves to find the banana ship, but her mother interrupts before they can leave, offering to take Hugo herself while Rita watches over hersiblings. Undaunted, Rita secretly follows them and reunites with Hugo at a nearby construction site. She helps him evade Cupmann's bounty hunters by navigating the storm sewers to the harbour front. After finding the ship, they share a bittersweet farewell that is interrupted by one of the trackers, but her quick intervention saves him from capture. As the ship leaves the next morning, Rita returns to the harbour for one last goodbye, telling Hugo to come back next year, when she will be old enough to live on her own so that they can live together.

After the events of the first Jungledyret movie, Rita is sad about Hugo's absence and looks sadly at the moon thinking of him. Then Rita sings to her brothers and sisters about Hugo and what adventures they got up to, they fall asleep after the song. Rita howls like a wolf and then goes to sleep, next day Rita finds out that Hugo has been captured again by Conrad Cuppman and has to go set him free, she finds Hugo there and tells him to only way to be free is to listen to Conrad and do as he says and it works later on but Hugo doesn't want to go because he wants to keep acting but Rita brakes up with him and leaves.

After Hugo escapes he finds Rita near where she lives but she's still not happy to see Hugo. In spite of everything Rita ends up forgiving him and the two make a hug. Rita then proposes to dig a burrow for them because she will have to leave the family burrow because her brothers will grow up. But at this point the Conrad helicopter is approachingRita makes a plan to hide from Conrad by digging a hole to hide, Conrad fins them in the end, Rita and Hugo hide in a barn where some pigs live and sets them free to learn about the jungle.

Hugo and Rita find a place to stay for the night but after a few days, Rita leaves Hugo because he's complaining about the cold, the lack of food and lack of hiding place during the autumn. Rita gets alerted when Conrad arrives and tries to find Hugo, she fins him, they reconcile and tries to escape from Conrad, they start to ice skate on the ice towards the bridge they get cut off by Conrad but ends up getting infected with the sleep needle (which was used to make Hugo go to sleep), Hugo and Rita ended up get on a train and the two sing their joy of finally being free and together, while admitting that they love each other and presumably going back the Rita's family. 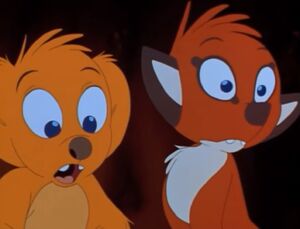 Rita with her love interest, Hugo.