Get a ruby for her family

Rita Malone is the deuteragonist of Flushed Away. She is Roddy's love interest and later girlfriend.

When Roddy was flushed down the toilet, he met an old sailor rat, Captain Peg Leg, who told him that the Captain of the Jammy Dodger might be able to help him get home. When Roddy found the Jammy Dodger in a dock, he went on board, seeking help.

The relationship between the two went down-hill fast. After asking Roddy what he was doing on her boat, she realised that she was being followed. When Rita tried to hide, she angrily told Roddy to be quiet. Roddy obliged, but he accidentally rested his elbow on on the horn. The loud sound gave them away, and Rita called him an idiot.

He stepped back into a bucket, tripped and pulled on the horn again, then fell overboard, repeatedly apologising. When the henchrats came on board, Roddy was fished out of the water by henchrat Whitey, and was captured as well. The rats wanted Rita's ruby, so Roddy begged Rita to tell them he wasn't involved.

Rita lied that he was a jewel-thief who had stolen her ruby. Roddy gasped and started to correct them, but henchrat Spike believed Rita, and threatened Roddy with The Persuader (a nutcracker). To get back at Rita, Roddy told them that the ruby was in Rita's pocket. She glared at him and called him a little snitch.

Whitey turned her upside-down, and the ruby fell out of her pocket. Spike picked it up, told Whitey to let go of Roddy, and thanked Roddy for getting the jewel. Roddy smiled then looked awkwardly at Rita, who glared back and said "You're toast!"

Things didn't improve after that, either. Roddy and Rita were brought to Rita's arch-enemy, The Toad. Roddy tried to get the Toad to help him get home, but when he told the Toad he was from Kensington, The Toad showed him his royal collection. Roddy accidentally angered The Toad by saying that the collection was amusing.

Roddy then tried to weasel out of his mistake, but instead managed to break everything in the Toad's collection after he'd knocked it over. Rita had her arms chained together at the time, but couldn't resist calling out "Smashing" when she saw that Roddy had smashed everything.

Outraged at both Rita and Roddy, The Toad tried to have them frozen, but Rita and Roddy managed to escape the freezer. Rita stole The Toad's master cable to use it to zip-line away. She attempted to desert Roddy, but Roddy jumped after her and caught her belt as she zip-lined away.

However, her belt broke, and Roddy wrapped is hands around her waist, but then her trousers fell down, and Roddy saw her underpants. Rita let go of the cable with one hand to pull her trousers up, but that caused them to fall.

They landed quite high off the ground and Rita used the cable as a belt. Rita used her agility and managed to climb down with ease, before running off. Roddy tried to get down as well, but slipped and, on the the way down, he landed on a hammer, a boot, a crowbar and then landed, on his stomach, on the ground.

He stood up and chased after Rita, eventually finding her on her boat. He jumped onto her boat off a bridge, but that caused the boat to rock. Rita lost her balance and flung the ruby into the air. She ran after it and he landed in Roddy's collar. Rita crashed into him and the ruby was launched into the air again.

She yelled in demand to give her the ruby as she stuck her hand down Roddy's back. Roddy pulled away and shouted that he didn't have the ruby. Rita grabbed his collar and was about to hit him, when the ruby landed in Roddy's hand. He then smirked and said "Now I have your ruby."

Rita lunged for the gem, but Roddy pulled his hand back and reached over the side of the boat. Rita slowly took her hand away from Roddy's collar and begged him to be careful - that the ruby meant a lot to her. Roddy inspected it, then told her that it was fake.

To prove this, he smashes it, and the pieces fall into the canal. This enrages Rita, and she attacks Roddy. However, after Rita calms down, Roddy offers her a real ruby if she takes him back to Kensington, to which she agrees, but the duo first stop to visit her family's house before setting off.

After arriving, Rita tells Roddy to stay outside. Once Rita enters her house, Roddy hears all her siblings shout "Rita!" in excitement, so he curiously looks through the front window. He sees Rita giving all her little siblings gifts, before greeting her parents, making Roddy realize that, unlike him, Rita is certainly not lonely. Just then, Rita's teen rother Liam points Roddy out as a peeping Tom, when Rita's senile grandma confuses him for Tom Jones.

Rita and her mum notice Roddy, when the latter comments on his good looks, prompting Rita to insist that he is not coming in. Several minutes later, a bowl of soup was on the table, and Roddy was joining them for dinner as he sat beside an irritated Rita. When Rita mentions to her dad that Roddy's from Up Top, he orders her to talk in the kitchen. Meanwhile, Roddy entertains the rest of Rita's family by singing Tom Jones songs as he dances on the table.

When Roddy finishes, he chats with Rita's mum, before offering to do her dishes for her. As Roddy nears the kitchen, he overhears a conversation that causes him to think that Rita and her family is selling him to The Toad, so he backs out from their deal and steals her boat. Rita catches up to him on a floaty and explains the misunderstanding by saying that it was her brother's plan and no one listens to him. Later, they both evade The Toad's henchrats, when they both realize they have fallen for each other.

The Toad sends for his French cousin, Le Frog, and his own henchfrogs. It is revealed that The Toad was Prince Charles' favorite childhood pet, until he was abruptly replaced by a pet rat, and subsequently flushed down a toilet, resulting in his hatred of rodents. Le Frog and his subordinates intercept Roddy and Rita to retrieve the cable, but the duo manage to escape out of the sewer and back to Roddy's home, though Rita's boat is destroyed in the escape, as they grab a plastic bag from it and float up a chimney.

The duo float down to the ground and manage to drop down the chimney of Roddy's flat. Roddy then rewards Rita with a genuine ruby, and as a bonus, an emerald to go with it, to match her red hair and green eyes respectively. When Roddy shows her around, Rita initially believes that Roddy has family home, then she sees his cage, making her realize that he is someone's pet.

Sid then walks in, and Roddy introduces him to Rita as his brother Rupert. However, it turns out that Rita and Sid know each other, and Sid runs away laughing. Rita tries to persuade Roddy to come with her, but he is too proud to admit that he is lonely. After an emotional goodbye, Rita goes to the bathroom and flushes herself back home, leaving Roddy with Sid, who is now comfy on the large couch in front of the television. Roddy angrily sits beside Sid to watch football, when Sid says he needs the bathroom, but doesn't want to miss the game.

From this, Roddy is able to piece The Toad's plan together: to open the gates during half-time of the World Cup, when all the humans will most likely be using their toilets. As a result, a great wave of sewage will form and flood Ratropolis, allowing the Toad to use the depopulated city as a home for his tadpole children. Therefore, Roddy entrusts Sid with his home and cushy position to impersonate himself for when his owners return home, and has Sid flush him back down the sewers.

Upon arrival, Roddy sees that Rita has been captured again, so he frees her, and together they defeat The Toad and his henchmen and freeze the wave of sewage with his liquid nitrogen. Roddy later joins Rita as her First Mate of the Jammy Dodger II. As they set off in the new boat, Le Frog and his henchfrogs are seen hitchhiking back to France.

Rita wears a light aqua-blue knit shirt with yellow lines, the cable as a belt (before, a regular brown belt), Union Jack pants (with blue striped boxers underneath), and brown cap shoes. She has flaming red hair and green emerald eyes.

Rita smiles as Roddy gives her a ruby. 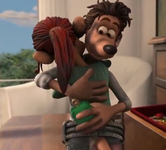 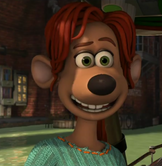 Rita in the credits.