Doctor Who: Silence in the Library

Have adventures in the Universe (succeeded)

River Song (born as Melody Pond) is the daughter of Amy Pond and Rory Williams, the wife and occasional companion of The Doctor and a recurring guest character in Doctor Who. River Song notably encounters the Doctor out of sequence, thus meaning for most of their time together, one knows more about the other, and vice versa.

When she was a baby River (then known as Melody) was taken from her parents by the Silence so they could use her as a weapon to kill the Doctor. Due to being a "Child of the Tardis" Melody had the Time Lords ability to regenerate but as River Song she gave the remaining regenerations to revive the Doctor.

She is played by Alex Kingston, who also voiced Quickshadow in Transformers: Rescue Bots. Her child self, Melody Pond ,was played by Sydney Wade in The Impossible Astronaut/Day of the Moon, and "Mels" was played by Nina Toussant-White.

Melody is a half-human/half-Time Lord, as well as the child of Amelia Pond & Rory Williams, conceived on the TARDIS after their honeymoon. The Tenth Doctor first met her in the Library in the 51st century, where it would be the last time for her, and it only gets more confusing from there. They move roughly in opposite time directions, and depending on what end of the timeline they're on respectively, they each know secrets about each other that they're unable to talk about without creating paradoxes.

The other reason is that her mother was abducted by a splinter group of the Papal Mainframe, a religious order who nominally protected certain sections of the universe. This splinter group, led by Madame Kovarian, foretold of the Doctor's arrival on a world called "Trenzalore", where, due to a confluence of events, the Last Great Time War would begin anew leading to the Doctor's permanent death. Engaging in extremes to prevent this, Kovarian abducted Amelia, held her captive on the asteroid "Demon's Run", and forcibly removed Melody from her mother upon birth, the idea being to train her as an assassin who would utilize her Time Lord abilities to insert herself into her parents' timeline as a friend called "Mels". Gaining intel, she would then move in and at the right time, kill the Doctor for good, succeeding in one timeline. What Kovarian didn't count on was Melody genuinely falling in love with him, even marrying him at a moment where his death was prevented, causing time to freeze but history to happen all at once. 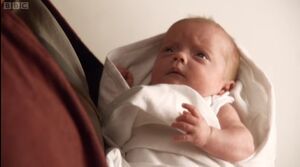 Melody Pond as a baby 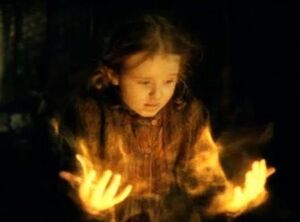 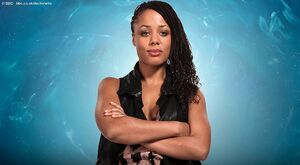 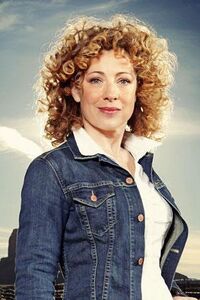 River Song in The Impossible Astronaut.