Help and protect Roy until he becomes Furher, Help destroy the homunculi

Riza Hawkeye is one of the main female protagonists in the anime/manga series Fullmetal Alchemist. She is a Lieutenant in the Amestrian State Military and is usually seen with her commanding officer, Lt. Colonel Roy Mustang whom she is implied (though never outright stated) to be in a relationship with.

Riza Hawkeye is a woman in her mid-to-late twenties with a moderately muscular and curvaceous build, blonde hair that reaches the middle of her back and brown eyes. The author has stated that Riza has broad shoulders from her military training and flared hips appropriate for her age.

While she has been known to wear her hair down, on the job Riza wears it fastened up in the back with a clip barrette in a style that resembles a bird tail. Her bangs fall in a hawk's wing pattern from right to left, occasionally partially obscuring her left eye. Though she had worn her hair short in her youth and during her tenure in Ishval, she began letting it grow out in 1910 after becoming acquainted with Winry Rockbell. Each of her ears is pierced with a silver stud and, while in disguise, Riza has been known to don faux eyeglasses. Riza frequently wears a black, short-sleeved turtleneck under her military uniform and often while in casual dress as well. Though Riza has noted (in Perfect Guidebook 2) that skirts restrict movement and therefore are not welcome in a military office, while in civilian clothes, Riza is mostly seen in long skirts and boots.

In the manga and 2009 anime, she has a large and ornate tattoo that covers most her back with large parts of it completely obscured by burn scars. She always wears clothes fitted to hide the tattoo.

Riza is a quiet and collected woman, with a serious but courteous demeanour. Hawkeye is viewed by her peers as the model of a perfect soldier; strictly disciplined and extremely rational, she rarely relaxes when on the job and is usually tasked with keeping her colleagues on track. Though from the outside she might seem strict, rigid, and even a little mean, Hawkeye is not as cold and distant as she may appear. Those close to her know that there is more to her than her no-nonsense attitude; beneath her professional aura is a kind soul who understands the difficulty of carrying a heavy burden.

Riza's softer side tends to make itself known through her interactions with younger characters, such as the Elric brothers and Winry Rockbell, and it isn't unusual to see her behaving sweetly toward her pet Shiba Inu, Black Hayate, while in private. Very disciplined, Riza takes her work seriously and is almost never seen “dropping formalities,” even with those who are most intimate to her. She’s not prone to public displays of affection, preferring to show her feelings through more subtle ways. Hawkeye seems the personification of "tough love," demanding excellence from those she respects or considers important. Her interactions with Hayate can be seen as a metaphor for all of her significant personal relationships—a stern hand and demanding nature tempered with genuine and deep affection.

It can be inferred that Riza also changed across the years; in her teens, she appeared to have been rather timid and idealistic about the world at large. Growing up at her father's house, she probably experienced a sheltered sort of childhood. After joining the military, her experiences in Ishval destroyed her youthful idealism and transformed her into the nearly stoic Lieutenant Hawkeye. Hawkeye emerges from the war with a tremendous will, strong enough to shoulder the heavy guilt she willingly bears, and uses this motivation to stand along side and support Mustang in the hopes that future generations will remain free of the horrors of something like Ishval. Reticent, she doesn't speak unnecessarily or express her feelings often through words, but reveals most of her thoughts through nonverbal communication, with trademark sharp looks and rare, subtle smiles.

Her character shows a mix between a tortured woman looking for redemption she feels is unreachable, and a resigned acceptance of past mistakes and their consequences. Hawkeye learns from Ishval to accept responsibilities for her actions herself, rather than placing blame or burden on another. She decides she must sacrifice her own happiness and comfort and continue to dirty her hands with blood as a soldier in order to bring peace to the people. Despite the emotional difficulties in facing her mistakes, she learns to school herself and her emotions as personal struggles, brushing off the concern of others, always bearing grief or physical pain with a stiff upper lip.

When meeting Winry Rockbell, Riza indicated that she also doesn't like the military, because she is sometimes forced to kill. However, when Alphonse Elric refers to her weapons as "a tool for destruction" later in the story, she corrects him, telling him it is a "tool for protection." Riza seems to hold the belief that a gun is simply an object, by itself unable to cause pain or suffering without a person pulling the trigger. It is not her weapons that she dislikes, but the death that she causes by using them. After Ishval, Riza tells Roy Mustang that "a gun is good. It doesn't leave the feeling of a person dying in your hands." When he counters that this mindset is self-deception, she agrees, indicating that she is willing to deceive herself and continue to do her duty as a soldier if it means assuring the safety of others. While in the 2003 anime, she's seen using her guns to intimidate her work colleagues into doing their jobs, in the manga (and 2009 anime), she seems to take weapons a lot more seriously and is never seen taking out her gun when she doesn't mean to shoot it.

Aside from her high-level administrative and secretarial skills (keeping subordinates in line, organizing and filling out paperwork as well as preparing tea and coffee expertly), Lieutenant Hawkeye is an expert sharpshooter and firearms specialist. Whether armed with a bolt-action rifle, sniper rifle, pistol or even two handguns at once, she is well known for never missing her mark and, in the manga, made a name for herself as the infamous "Hawk's Eye" of the Ishval Civil War. A true professional, Hawkeye is able to disassemble, properly clean and reassemble a standard issue firearm in record time and rarely goes into battle with fewer than two loaded firearms on her person. Additionally, she is quite skilled in combat tactics and covert operations, and is able to instinctively sense that Homunculi are a greater threat than a typical human. Such sensitivity is likely due to her sharp instincts from her experiences in combat. 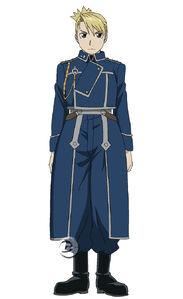 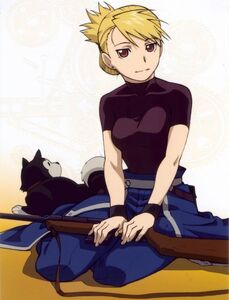 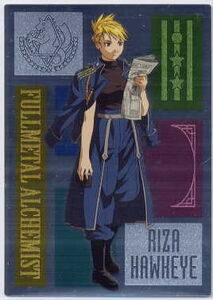 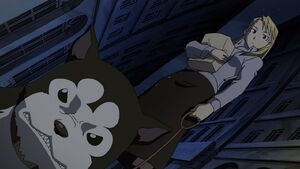 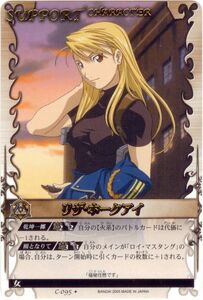 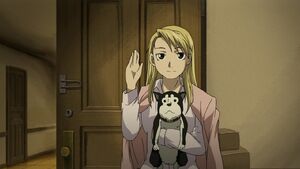 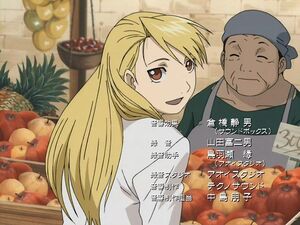 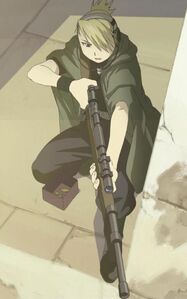 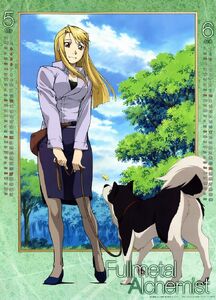 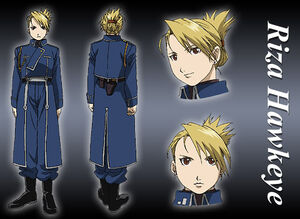 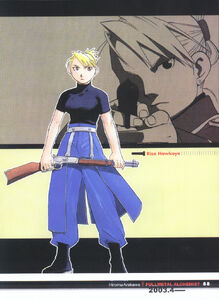 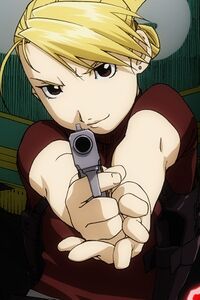 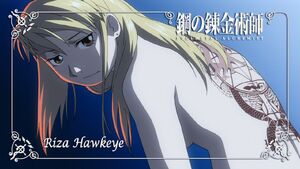 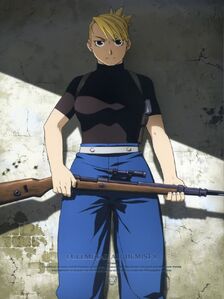 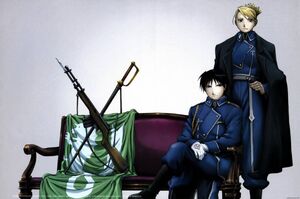 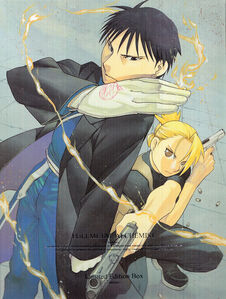 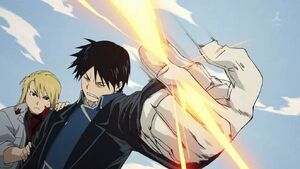 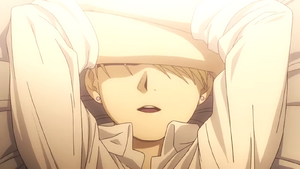