Robbie Freeling is a character in the Poltergeist series. He is portrayed by Oliver Robins. He has an older sister named Dana and a younger sister named Carol Anne.

Robbie is the middle child of Steve and Diane Freeling. He lives with his parents and his two sisters. He has to sleep with Carol Anne before she was kidnapped. He is moved to sleep with Diane in the living room. He was kidnapped both the possessed clown doll and the possessed tree and almost blew out by the tornado. After that, his house was vacuumed up by the ghosts and is forced to spend the night at the hotel with his family.

Poltergeist II: The Other Side

After moving to a house again, he had braces on and Henry Kane's ghost wrapped the brace all over him. With Steve, he rescued Carol Anne and Diane and his nightmare is over. 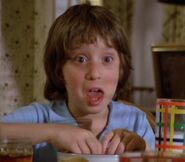 Retrieved from "https://hero.fandom.com/wiki/Robbie_Freeling?oldid=2098807"
Community content is available under CC-BY-SA unless otherwise noted.