Keeping an eye on dinosaurs that deemed dangerous

Velociraptors (especially the Big One)

Robert Muldoon is an important supporting protagonist appearing in both the novel and film of Jurassic Park.

He was portrayed by the late Bob Peck.

Muldoon was Jurassic Park's game warden. He was from Kenya, and was hired by John Hammond due to his experience with wild animals. A very cautious and levelheaded man, Muldoon was of the opinion that the park's Velociraptors were too dangerous to be kept, and should be destroyed, an opinion the arrogant John Hammond did not share. Muldoon frequently clashed with Hammond over the dinosaurs, demanding lethal weapons with live ammunition in case of a breakout. When Hammond refused, Muldoon threatened to quit unless he got his weapons, so Hammond finally gave him what he wanted.

Muldoon was instrumental to the efforts to get the park back online following Dennis Nedry's sabotage. He was assisted ably by Donald Gennaro. Following the initial power outage, Muldoon and Gennaro went to retrieve the visitors from the Land Cruisers, only to find Ed Regis' severed leg and a very badly injured Ian Malcolm. Using his tracking skills, however, Muldoon was able to determine that Dr. Grant, Tim and Lex had made it out safely.

Near the end, he tranquilizes the Tyrannosaurus rex and helps in the fight against the raptors, during which his leg is badly injured. However he survives and escapes off of the island with everyone else in a Costa Rican army chopper.

Muldoon is still a white Kenyan man and longtime employee of Hammond, and his opinion of the raptors remains the same, especially after a terrible incident in which an innocent worker was killed, despite Muldoon's best efforts to save him.

When the power went out thanks to Nedry's machinations, Muldoon took a gas-powered Jeep at Hammond's request and, along with Ellie Sattler, went looking for their stranded friends. They found one Explorer abandoned, the other crumpled at the base of a tree, and a badly wounded Dr. Ian Malcolm. The Tyrannosaur appeared, but Muldoon was able to outrun it in the Jeep, getting himself, Ian, and Ellie to safety.

Later, when Ellie went to the generator shed to get the power back on, Muldoon went with her. They discovered that when Ray Arnold had done an emergency shutdown to reboot, it had turned off the fence around the Velociraptors' pen, allowing them to escape. Muldoon covered Ellie's flight to the shed, and then took it upon himself to hunt the alpha female Raptor. However, the hunter became the hunted, as Muldoon realized too late a second Raptor was beside him. He had no time to react before the animal sprang from the bushes and tore him apart.

Muldoon survived in the Topps Comics sequels to the first film, despite being killed in the movie adaptation. He regularly assisted Grant, Ellie and Ian on their various adventures in South America battling rogue raptors, and eventually returned to Isla Nublar with them to find out what General West was up to. 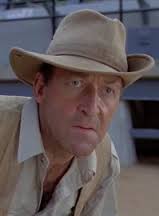 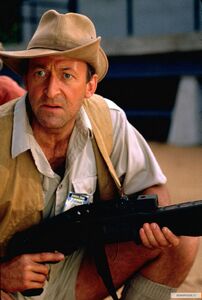 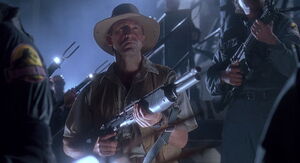 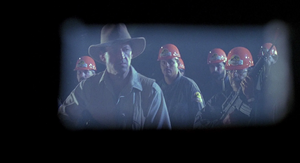 Muldoon overseeing the cage of a Velociraptor. 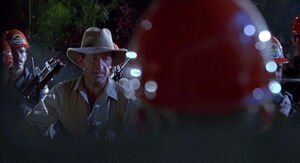 Muldoon with his men. 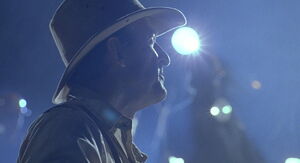 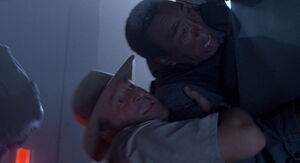 Muldoon trying to save Jophery when the Velociraptor grabs him. 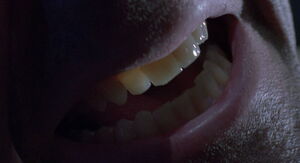