To become the worldwide sensation.

Fighter
Robert "Bob" Richards is a character as well as a hero in the Tekken series who was introduced in Tekken 6 and returned for Tekken 6: Bloodline Rebellion. Bob is a renowned martial arts prodigy from the USA.

An alternate version of himself named Slim Bob is playable in Tekken Tag Tournament 2. As the name suggests, he is a skinny version of Bob which made an appearance in his Tekken 6 ending.

He is voiced by Patrick Seitz.

Bob's real name is Robert Richards. Bob had always been very serious about his training. He was hailed as a master of martial arts from a very young age, and he garnered many fans with his chiseled body and good looks. However, he could not defeat opponents who were larger than him. He vanished from the martial arts scene and dedicated himself to a special training regimen that increased his power and weight while maintaining his agility. After several years in seclusion, Bob returned to the fighting world a changed man.

Those who know Bob were astonished by his transformation. His handsome looks were gone and he gained a disproportionate amount of weight. Bob paid no attention to his critics, and relied on the benefits of his training: speed, power, and unyielding weight. He decided that he was ready to return to competition; he joined The King of Iron Fist Tournament 6 to test his martial arts abilities once again. 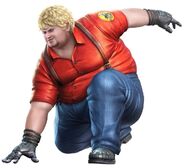