He was voiced by Jonathan Tucker.

He is best friends with Ronald "Red" Daniels. He is a pretty caring soldier who tries his best to look out for his friends, including Daniels, Frank Aiello, and Drew Stiles. He is also very strong as he got injured in the D-Day mission but in the next mission, was able to fight after possibly not being 100% better just yet. Based on the fact that he is of German Jewish descent, he is capable of speaking a little German. He gets captured in the last mission by the Nazis, as he’s Jewish. He survived the concentration camp after being found by Daniels, William Pierson, Aiello, and Stiles. He is also seen hospitalized in the end based on what he went through and tells Daniels to pass on his story.

Robert Zussman is one of the best examples of a pure-hearted hero to the point where everyone holds him in awe and respect, and mocking him or insulting him is seen as an unforgivable offense.

Robert Zussman was born in 1923 in Eastern Europe, but he was raised in the Chicago southside, Illinois, through his childhood. He is from a German-Jewish family and heritage, and presumably learned German from his family. During his time in high school, he was beaten up by the football captain for not giving him Zussman's watch. Afterward, Zussman and his friends got their revenge on the captain in a poker game.

Zussman participated in the invasion of Normandy, landing on the beach with his squad to stop the Nazi forces. After dealing with the carnage on the beach, Zussman assisted Daniels in using the banger to blow the seawall to move forward. When clearing the last banker, Zussman fought a Nazi soldier who was attacking Daniels, but was stabbed by the soldier. Daniels carried Zussman to a field hospital, and Zussman is saved from near death as Daniels regroups with Turner and Pierson. Afterward, Zussman asked Daniels that they would make it to the end, and the two agreed.

Later on, Zussman and the squad worked with tank commander Augustine Perez, and the squad attacked German Stukas. After capturing the AA guns and destroying German planes, the infantry regroups to take out the PaK 38 guns. Later on, Daniels and Zussman are sent by Colonel Davis to rescue Charlie Comapny. In Marigny, Manche, Zussman and the squad fought the Nazis forces and were able to capture the church and tower. Pierson sent Zussman and Aiello to destroy the Nazis' AA guns while Daniels and Pierson cave them cover fire, but the tower was attacked by one AA gun. Zussman and Aiello returned to the squad after they defended the tower from hostile forces.

The Infantry later worked with S.O.E. agents Arthur Crowley and Vivian Harris to intercept a train carrying V-2 rockets, and succeeded despite Zussman and Daniels crashing it. After the crash, French Resistance leader Rousseau rescues them, and takes them back to their squad and Crowley and Vivian. Zussman later participated in liberating Paris from the Nazis, with the squad ambushing them after Rousseau and Crowley planting detonations in the garrison.

In Aachen, the squad asked for the assistance for Perez when dealing with PaK artillery and captured the hotel. In the basement, the squad discover civilians, and Zussman is able to translate what Erica, the older sister of Anna, was saying. Turner decided to escort the civilians to safety, and Erica was killed by a German soldier when they were leaving.

In Hürtgen Forest, Zussman and the squad participated in defending it from enemy fighters, and was part of Pierson's team as Daniels and Stiles were with Turner's team. Pierson decided to take his platoon to Hill 493, gaining the ire of Turner, who later confronted him when helping him at the hill. Turner is later wounded by a tank commander, and decides to stay behind to let his men escape, and is killed.

Zussman later participated in the Battle of the Bulge, working with Howard to fight off the forces until Pierson orders an air strike on the German tanks. After Daniels got intel from a German prisoner on the German's counterattack, the infantry ambushed them at their airbase. Zussman was captured by the Germans, and Daniels attempted to save him, but failed and was honorably discharged for disobeying Pierson's orders.

Zussman was taken to a German labor camp, and was interrogated by Metz, who wanted to Jews for labor and imprisonment. Zussman was taken to one of the concentration camps, was tortured for months by Metz until the Germans surrendered at the Rhine. Metz decided to destroy the evidence of the camp, and took Zussman into the forest to execute himself. However, Daniels killed Metz, and Zussman was helped up by Daniels, Pierson, Stiles and Aiello and taken to a hospital.

Once the war was over, Daniels met with Zussman once last time, and the two said their farewells after reminding each other of the promise they made and fulfilled, making it to the end. 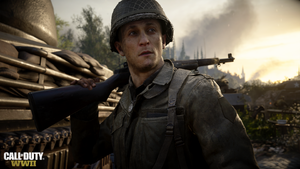 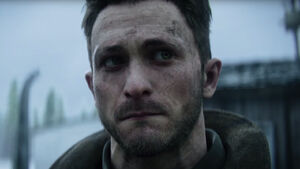 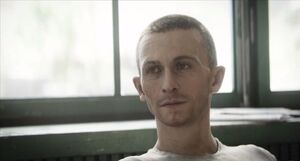 Retrieved from "https://hero.fandom.com/wiki/Robert_Zussman?oldid=1671954"
Community content is available under CC-BY-SA unless otherwise noted.