Head maid for the Lovelace family

Taking care of and playing with Garcia

Take down the US Special Forces
Avenge Diego Lovelace's death

Rosarita Cisneros is one of the main antagonists and anti-heros of the anime/manga series, Black Lagoon. She is the head maid for the Lovelace family, one of the 13 great families of South America and worked for them for four years in their household in Venezuela. In her past, though, she was a fearsome FARC assassin known as the "Blood Hound" and is widely considered the deadliest fighter in the entire series.

It is ironic that while Roberta is one of, if not the most dangerous fighter, in the series, she is also one of the more humane. She is unwaveringly devoted to her master and dotes on his son, Garcia, whom she loves deeply. She also feels deep guilt for her life as an assassin for FARC and wants nothing more than to leave that part of her behind, working for the Lovelace family as a way of atonement. Despite being the head maid, Garcia states that Roberta is also rather clumsy and, overall, not very good at her job.

Her kindness can easily change as seen in a humorous omake in Volume 1 of the manga when Garcia flipped her skirt up, groped and slapped her bottom in a playful manner, which prompted her to pinch his arm and lift him up off the ground by the skin of his arm as punishment until he apologized, showing that her patience has a limit before losing her temper. Additionally, despite claiming she has no tolerance for foul language, it's revealed during her brawl with Revy that she is not completely above cursing as shown when both she and Revy told Rock in unison to "STAY THE F*CK OUT OF THIS!" while they were fighting.

There are a few hints that, despite her bloody past, she may be religious, unlike most of the other characters in Black Lagoon, specifically Catholic judging from the large crucifix she wears around her neck and her constant prayers during her revenge. 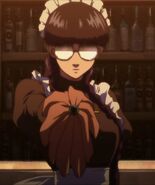 Add a photo to this gallery
Retrieved from "https://hero.fandom.com/wiki/Roberta_(Black_Lagoon)?oldid=1802807"
Community content is available under CC-BY-SA unless otherwise noted.