Uncle Beto (by Tiago and Bia)

To protect the Amazon from humans (succeeded)

Roberto is a male Spix's Macaw who appears in Rio 2. He is Jewel's childhood friend who stirs up Blu's jealousy. "Most of the sparks between the former couple are imagined through Blu's eyes," says Carlos Saldanha. "It's a little paranoia." Roberto is voiced by Bruno Mars.

Roberto is the Fabio of The Blue Macaws – a confident, charismatic bird in every way, and the exact opposite of Blu. Roberto is also hiding a secret and when Blu finds out, there is a surprising shift in their dynamic.

Jewel's childhood friend and the son Eduardo never had, Roberto is pretty much the opposite of Blu – all charm and suaveness – and it seems as though there's nothing he can't do, everything he does is heroic. With an impressive wing span, he sings, dances and makes all the females swoon, making Blu feel incredibly inadequate.

The heartthrob of the Spix's macaw clan, Roberto is a perfect specimen of a wild bird who charms everyone around him and makes Blu self-conscious.

If Roberto’s looks, talent and friendship with Jewel weren't intimidating enough for Blu, the songbird hosts the family in his magnificent mansion, located in one of the Amazon Rainforest’s most impressive trees. Interweaving roots create open pockets, perfect for rooms housing Blu and his family.

He’s a genuine dude and he really has love for Jewel – genuine love. They grew up together, so they have a bond that’s pretty special, they have a history and an almost secret language.

Roberto is a watchman for the tribe, even doing night patrols to make sure they're safe from humans. It appears he has been trained by Eduardo on this subject, and Eduardo puts a lot of trust in his job. He also seems to be the captain of their tribe's soccer team, and most likely one of the best players. He plays against the Scarlet Macaw tribe in the Pit of Doom. He is, in general, the one bird Eduardo goes to when he needs a hand.

He comes to welcome Jewel when she arrives at the tribe, and the both of them begin calling each other by their childhood nicknames, to Blu's discomfort. During "Beautiful Creatures", Roberto places a flower on Jewel's head and they head off to dance with the tribe. Blu watches, displeased. Roberto then tells the couple that he's doing a night patrol, and that they should stay in his nest. Blu is uncomfortable staying with him, but Roberto, unaware of this, insists that they stay out of his generosity.

The kids love the place, but Blu keeps acting jealous. Roberto tells Blu that he would like to have kids some day, and that he would take care of his family if anything were to happen to him. He then heads off to do his patrol. The next day, he's seen playing around with Tiago: They water-ski together, he teaches the boy flying tricks, and they both call each other nicknames (to Blu's further disapproval).

Eduardo shares with him his feelings about Blu not being trust worthy, and being a "pet." Roberto seems confused and surprised by this but does not seem to take a side.

Roberto plays a soccer match for his tribe to conquer the access to the Brazilian nut grove. He and Felipe appear to have a history, acting aggressively toward one another. He plays very well, and scores multiple times, making acrobatic air moves, to Blu and Jewel's kids' wonder. He's also the only one not to show disappointment upon Blu's mistake on scoring to the wrong team, although before Blu goes towards the goal he tells him to wait.

When Blu visits Linda and Tulio's camping, Roberto follows him and believes he's teaming up with the humans, and concludes Eduardo was right and calls him a "Traitor". Blu asks him what he knows about humans, and he answers he knows well, and nervously gestures while talking. He says humans trap you and then feed you crackers, insinuating he has experienced this.

A huge logging harvester surprises them both, Blu gets out of the way, but Roberto, upon seeing a human, freezes in the machines' path. Blu saves him in time, but he starts panicking and screaming. Blu slaps him in the face and tells him to go back and warn the tribe about the loggers. Upon arrival, he is carried by two macaws as he is in a seizure-like state, panicking and saying that they are all doomed. He manages to tell them about the loggers, and after Blu encourages them, the tribe decides to fight. He later is seen panicking again and is then slapped by Mimi, which causes him to act aggressively toward humans. He then works together with Felipe to fight humans, now apparently in a better state of mind. The two share a chest bump as the loggers flee, hinting that their previous rivalry may have dissolved.

Roberto is last seen reacting in shock when Blu and Nigel are caught in the explosion of the dynamite, but it is likely that he joined in the celebrations afterwards.

Roberto is a very handsome male Spix's macaw; tall, with an impressive wingspan, and large claws. He has a long tail, his plumage being lush and dark blue. The markings around his eyes and beak are a lighter blue that goes down to his chest, fading to his main color. His eyes are blue, and his beak and talons are gray. Roberto has long, sleek dark blue crest feathers on his head which fall on the back and either sides of his head. One shorter feather sticks up on his head. His hair frequently blocks his eyes, making him shake his head around to push it back. When he is angry, frightened or shocked, the feathers will very suddenly spike out.

Roberto has been described as "wild, yet very suave." It seems as though there's nothing Roberto can't do. With confidence and an impressive wing span, he sings, dances and makes all the females swoon, making Blu feel incredibly inadequate. Roberto loves to sing and dance, and flirt with females; he can even make a female faint by simply shaking his crest feathers. Roberto is also very artistic and creative, shown by his nest which is decorated with flowers and plants.

Like most wild macaws, he is very "anti-human," both afraid of and hateful toward humans because of their destructive activities in the rainforest. Similar to Jewel, he cherishes his freedom and would never fly into a cage. Also, it is suggested that he was once captured and kept as a pet. He claims humans make you lose your mind, while he himself makes stereotyped parrot movements that are related to his memories of captivity. He's now so terribly afraid of them, that only the sight of a human is enough to trigger a panic attack.

He seems to be something of a showoff, boasting of constructing a hollow-based nest with his "brawn", and performing an elaborate "Welcome Back" song for Jewel, which Carlos Saldanha even suggested was more for Roberto to hear his own voice than anything else.

He does like to have fun with others, shown when he went water-skiing on lily pads with Tiago. Roberto is protective and proud of his forest home, and despite what Blu may think of him, Roberto has a good heart.

"I'll be the first to say welcome back!"

"Eduardo was right! You pet! You traitor! Leading us to those humans! I shoulda known!"

Roberto and Felipe fighting against the loggers 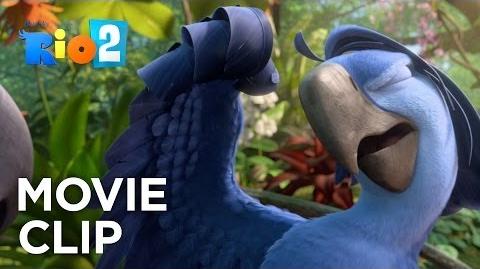