Robin is the position of Batman's sidekick and partner, who are usually teenagers taken in to become vigilante to protect Gotham City, and members of the Batman Family.

The original and first Robin was Dick Grayson, later known as Nightwing, is the sidekick of Batman in most of the DC comics and cartoons, as well as the leader of the Teen Titans - his personality varies from a typical loyal sidekick to a more dangerous antihero depending on the story but he is continually shown as brave and clever but a bit too eager to prove himself to others. After him was Jason Todd, then Tim Drake, Stephanie Brown, and Damian Wayne.

The creators depend upon which character is Robin, and Dick Grayson as Robin was created by Bob Kane, Bill Flinger and Jerry Robinson, and first appeared in Detective Comics # 38.

The very first Robin, Dick was an part of an acrobat family that belonged to Haly's circus. When the circus owner refused to pay the local mobsters for protection, they sabotaged the Grayson's trapeze act, resulting in the deaths of his parents. Bruce Wayne, feeling empathy for the boy, decided to take him in. It wasn't long before Dick found out about Bruce and Batman being one and the same and used his acrobatic finesse to become Batman's sidekick: Robin the Boy Wonder.

Dick Grayson founded the Teen Titans and helped unite other teenage heroes in the fight for justice. During this time, he developed romantic feelings for both Batgirl and Starfire. By the time he was 18, Dick had outgrown his position as Batman's sidekick and changed his identity to Nightwing.

After the first Robin left, Batman recruited another orphan to help fill the void he left behind. This orphan just happened to be a thief good enough to try and steal the tyres from the Batmoblie. Batman offered him a better life as Robin, though he would come to regret it for the rest of his life. Jason was violent, rebellious and impulsive, lacking the stealth and finesse of his predecessor. His hot-headedness got the best of him when he was caught by the Joker, beaten with a crowbar and trapped in a warehouse with a bomb.

Years later, it was revealed that Jason had been brought back to life through a rift in time and space. He was recovered by Talia Al Ghul and trained to be an assassin. He formed a new identity for himself based on the previous disguise worn by his killer: The Red Hood.

Jason clashed with the Bat-family many times, but has always been met with sympathy and forgiveness. He's currently on the run, but shows signs that he may come back as a hero.

Tim Drake was not an orphan, but he was a genius detective with some athletic prowess. Tim figured out that Bruce Wayne and Dick Grayson were Batman and Robin and approached them after Jason's death, hoping to reunite the team. Dick felt that he was too old to be a sidekick, but Alfred encouraged Tim to take on the mantle.

Bruce reluctantly let Tim become Robin, but unlike Jason, Tim proved himself a true successor. Unfortunately, Tim was beset on all sides by death and pain. His girlfriend, parents and best friend were all killed, leading him to become more withdrawn and to take on a Robin costume that looked more like Batman's. Tim later became The Red Robin.

He was created by Marv Wolfman and Pat Broderick.

Formerly the vigilante known as Spoiler, Stephanie was a crafty, albeit naive, young woman. She dated Tim Drake for a short while, but when Tim's father forced him to retire from crime-fighting, Stephanie begged Batman to make her the next Robin. Unfortunately, Stephanie didn't have the discipline to be Robin, often jepoardising missions that tested Batman's patience with her. He then had to let her go, knowing that she was going to get herself killed at this rate. Stephanie then went back to the Spoiler mantle, only to be beaten to death by the Black Mask.

It was later revealed that Stephanie's death had been fabricated. She returned a year later first as the Spoiler and then later as Batgirl.

Stephanie Brown was created by Chuck Dixon and the late Tom Lyle.

Damian is the son of Bruce Wayne and Talia Al Ghul. Starting out as a violent, spoiled brat, he challenged Tim Drake to the right to wear the Robin mantle, only to be chastised by his father. When Bruce Wayne was presumed dead, everyone close to him reinvented their identities, including Damian, who was to become the new Robin to Dick Grayson's new Batman. The two had a shaky start, but Damian began to view Dick as a surrogate brother and they qucikly formed a strong partnership after defeating Professor Pyg.

In the New 52, Damian is now Robin to Bruce's Batman, hoping to bond with his father a little more. Their relationship is a lot more strained than it was with Dick as Batman, due to the two heroes having hardened personalities.

Damian was eventually killed in action by The Heratic, is own artificially-aged clone, which drives Batman to the brink of insanity.

In an alternate future, Damian eventually succeeds Bruce as the next Batman.

In The Dark Knight Returns, Carrie was originally a Robin cosplayer who decided to go out and become a vigilante after seeing Batman come out retirement. Despite not having any formal training, Carrie quickly established herself as a worthwhile Robin.

In The Dark Knight Strikes Again, Carrie has taken on the guise of Cat-girl.

There was also Jason Todd, but he was thought to have died at the hands of the Joker until the events of Arkham Knight.

In The Dark Knight Rises, Bruce Wayne is approached by a young cop who managed to figure out that he was the now-retired Batman.

Blake displayed heroic traits that that the older generation seemed to have forgotten, such as a dislike of firearms and killing, a willingness to put a child's life before his own and was extremely courageous, going up against several terrorists with a minimal amount of protection.

When it's believed that Batman was killed, Blake inherits the Batcave under his birthname: Robin. He then journeys into the cave and presumably becomes the next Dark Knight.

Intimidation: It is known that Robin has the ability to instill fear in others, even the people that know him best can be intimidated by him.

Peak Human Conditioning: Through intense training, Robin represents the pinnacle of human physical ability. His physical characteristics are greater than that of even an Olympic level athlete. His strength, speed, stamina, agility, reflexes, durability, senses, and coordination are at peak human perfection as possible for one of his age, to improve even further with continued physical and mental growth. Robin engages in intense regular rigorous exercise (including aerobics, weight lifting, gymnastics, and simulated combat) to keep himself in peak condition, and has often defeated opponents whose size, strength, or other powers are much higher than his own. He has spent his entire life in pursuit of physical perfection and has attained it through constant intensive training and determination, to the point that he is able to take on all of his teammates at once and beat them (this is particularly significant as he is not trying to hurt them).

Martial Arts Master: Robin is one of the finest human combatants on Earth, his skills honed to such a level even superhumans and armed adversaries can be overpowered by them. He has mastered several different martial arts styles from across the world, learned from the Dark Knight and the True Master. He even learned some alien martial arts from Blackfire.

Master Stealth: Robin, despite the bright colors he wears, is a master at stealth, capable of breaching high security facilities with ease, without being detected.

Master Detective: Robin is an expert detective and logical thinker, able to solve cases before anyone else.

Escapologist: Robin is shown to be able to escape even the most elaborate of traps.

Tracking: Robin is shown to be able to pick up a criminal's trail long after any given crime.

Expert Thief: Robin has shown that he's quick well at playing the role of a thief, as he had shown when he went around as Red X and when he had swiped X's belt

Expert Mechanic & Vehicle Driver: Excellent at motorcycle driving. Robin was also responsible for the creation of the high-tech Red X suit, capable of defeating multiple superhumans with ease, and he and Cyborg developed the T-Communicators. He has also used the Tower's own technology proficiently, including its computer and his own laptop.

Robin appears in all DC-related titles such as comic books, cartoons and movies. The Robin most often used is Dick Grayson. Dick Grayson has appeared as Robin (Batman’s sidekick) in several other media adaptations: the 1943 serial played by Douglas Croft, the 1949 serial played by Johnny Duncan, the 1966–1968 live action Batman television series and its motion picture portrayed by Burt Ward. In May 2011, IGN ranked Dick Grayson #11 on their list of the "Top 100 Super Heroes of All Time".[4] In 2013, ComicsAlliance ranked Grayson as Nightwing as #1 on their list of the "50 Sexiest Male Characters in Comics".[5] 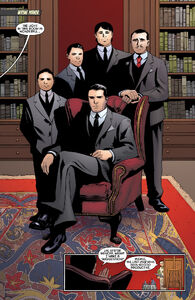 Robins past and present with Bruce Wayne and Alfred 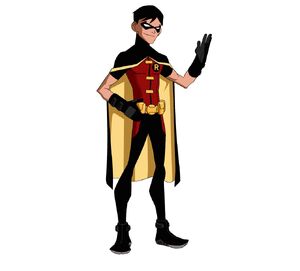 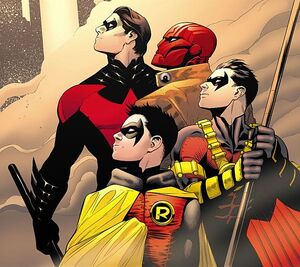 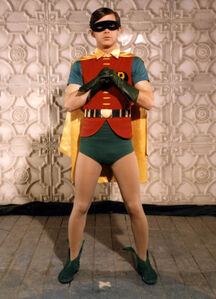 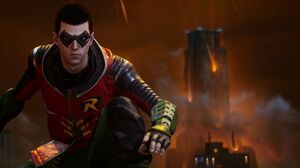 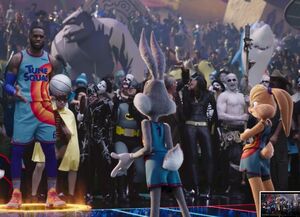 Robin and Batman in Space Jam: A New Legacy