Hanging out with Batman

Being adopted by Bruce Wayne (Done)

He was voiced by Michael Cera, who also played Scott Pilgrim in Scott Pilgrim vs. The World, and Brother Bear in The Berenstain Bears.

Batman has always battled alone against the forces of injustice and evil, but now he’s suddenly got a kid sidekick to deal with. Where Batman is silent, serious and brooding, Robin is loud, enthusiastic and constantly bursting with excitement at getting to work with his favorite Super Hero and new dad. Only time will tell whether he proves himself to be a boy blunder or a true Boy Wonder.

He was part of the Gothic City Orphanage, and he is a huge Batman fan. He get the opportunity to met Bruce Wayne in the celebrate the retirement of Commissioner Gordon and he ask questions to Bruce Wayne (A.K.A Batman) and Bruce answers all his questions but he also did when he was distracted watching Barbara Gordon. He finally gets adopted even know that Bruce gone.

The next day, he's happy to be in the Bruce mansion and he goes exacted watching and jumping and touching everything of the mansion. Alfred let him enter (when he was in the Bat-cave with Batman) and Robin gets more excited when he sees the Bat-cave and meeting Batman in person. Meanwhile, Batman tries to get the Joker to the Phantom Zone Projector. Discovering that he's unlivable to enter to the sect of the phantom zone, he gets the idea that Dick can enter by his amazing skills. Before they go to the Strength of Solitude, Dick gets a new dress (And pushing back his pants) and his renames as Robin.

In the Strength of Solitude, Robin goes to take the Phantom Zone Projector passing all the traps when Batman discovers that inside Superman house there's a big party celebrating the 70 anniversary of the justice league without him. Robin finally gets the Phantom Zone Projector with the help of the indications of Batman and he finally goes out. Batman almost admits that he's proud of Robin, but he's also too proud to admit it.

Some hours later, Batman and Robin head on down to Arkham to take on Joker. Barbara finds them and has them go through security. When Robin is caught trying to smuggle the Projector, the two beat up the guards and run to Joker's cell. Just as he expected, Batman confronts Joker and hits him with the Projector, sending him into the Phantom Zone. Barbara locked up Batman and Robin for his actions.

After Joker returns to the Phantom Zone, Robin gets sad and Batman encourages him to say that Bruce Wayne is scared and rap with him. He and Batman finally gets free by Barbara only on the condition that he allow her to join and help. Batman begrudgingly agrees, and he is now joined by Barbara, Robin, and Alfred (who somehow made it from Wayne Manor to Arkham on his own). The heroes take the Batwing across the city as they try to locate Joker.

The Gremlins start tearing into the Batwing, leading Batman to hop outside and leave the Batwing on autopilot with some rope tied to the controls. Robin and Alfred join him in taking out the Gremlins. Robin falls off the Batwing, and Batman jumps to rescue him. Alfred falls off too and nearly plummets to his death, but Barbara takes control of the Batwing and saves him. Batman then comes up with a plan and has Barbara fly toward Sauron's eye, just as Kraken blasts a fireball at the Batwing. At the right moment, Barbara steers the Batwing away and causes Sauron to get blown to bits, meaning Joker no longer has an eye on Batman.

The heroes make it to Wayne Island and applaud each other for their accomplishments. Robin takes a selfie with everyone as his new family, which then strikes a nerve with Batman. The other three go into the Batwing for more gear, but Batman locks them in there and has the computer send them to the border of Gotham City and Bludhaven so that he can protect them and fight Joker on his own.

When Batman gets in the Phantom Zone, he realize that he's actions get hurt by the people who care about him including Robin. Batman discovers that his friends are in danger so he makes a deal with Phyllis to take back the villains of the Phantom Zone and he goes back to Gotham to save his friends.

Batman apology's to be so selfish with them reveling his greatest fear. So, whit his friends back and the help of Joker's old team, they make a super team with customs and music that Batman hate's fighting with all Joker's new friends turning back to the Phantom Zone. They finally maid it but Gotham gets starts to break the city apart. Batman, Robin and his friends all form a chain link using their heads and feet to pull the city back together, along with the citizens of Gotham. It's still not enough, so Batman is forced to ask for Joker's help. Batman admits to Joker that he truly is his greatest enemy and that they need each other. Joker is touched and helps Batman pull the city back together.

With the city saved, Batman must fulfill his end of the bargain and return to the Phantom Zone. He reveals himself as Bruce Wayne to Robin and finally accepts him as a son. They have a tearful hug goodbye as Batman ascends to the Phantom Zone. However, he gets blocked from going up. Phyllis appears and tells Batman that she has seen how he changed to help those that he cares about, and has decided he can stay with his friends. Batman and Joker then part ways as Joker heads off with the rest of the rogues. Batman decides to give them a 30-minute head start before he and his team go catch them.

Batman and Robin are both now part of a new family. Batman hangs up the family selfie in his room. As the credits begin, Robin asks Batman if he can play a song that he's written specifically for the credits. Batman and all his friends and enemies get together to perform the song. 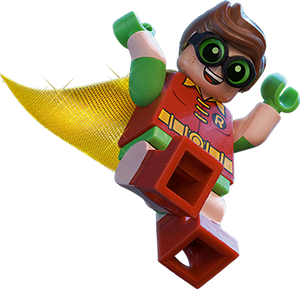 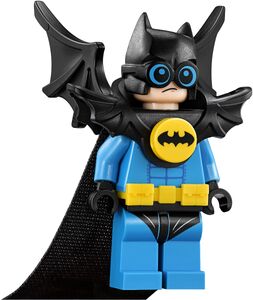 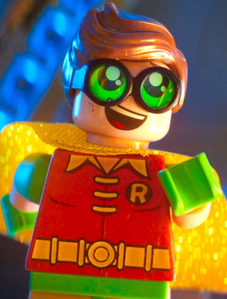