Robin Buckley (born 1968), is a main character introduced in the third season of Stranger Things. She worked at the Scoops Ahoy in the Starcourt Mall with Steve Harrington, and later becomes an ally of the Party to stop the Mind Flayer.

She is portrayed by Maya Hawke.

Robin has been in Hawkins for awhile as she attended 'Hawkins High School'. She tells Steve she would sit behind him in class and noticed him being late every Tuesday and Thursday. The main thing she noticed about his presence in class wasn't him, but the fact that her crush, Tammy Thompson, couldn't take her eyes off of Steve, which made her jealous. Around 1973, Robin joined a band, and became fluent in different languages (Spanish, French, and Italian). In addition, she also plays soccer, and states that she was a "loser" back in high school.

When the Starcourt Mall opened, Robin got a job at "Scoops Ahoy", a ice cream palor in the foodcourt, and also became Steve's co-worker. The two didn't get along very well, as Steve attempted to pick up dates while working, and Robin making sarcastic comments about him (often calling him "dingus"), his friends, and teasing customers.

While he would try to pick up dates, Robin made a tally of his success and failures, with him unsuccessfully doing so (with Robin writing "You Suck" for his fails). Additionally, Robin would tease customers that would irritate her, a notable example is Erica Sinclair, a frequent customer who abuses the free sample policy.

At first, Robin showed herself to be sarcastic and sassy, often mocking Steve in every interaction. She doesn't hesitate to be sassy in front of customers she has issues with, such as Erica Sinclair, who abuses the free sample policy. She dislikes Steve's flirtatious behavior, even going as far to create a "You Rule/"You Suck" board on Steve's interactions with girls. Despite this, she shows herself to be highly intelligent, as she was able to crack the code for Steve and Dustin, and notices that it wasn't in Russian as they believed.

It's later revealed that her snark personality is to protect herself, as she has faced adversity her entire life. She states back in high school, she was somewhat of a loser, and didn't have many friends (excluding her band mates). In addition, she is also brave, as she spit in the face of her Russian captor. She officially reveals that she is a lesbian, and admits that she didn't tell Steve because she worried of their friendship, and was envious of Steve's crush on Tammy Thompson back in high school. However, Steve's accepts who Robin is after admitting his feelings for her, and the two continue to help and protect the children from the Mind Flayer.

Robin on the season three poster. 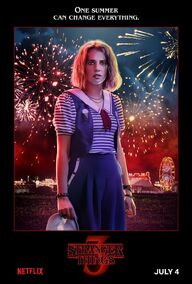 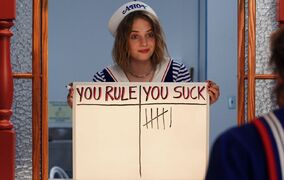 Robin showing Steve the board, seeing the "You Suck" tally.

"That was pig latin, dingus."

Robin theorizing what the message could mean. 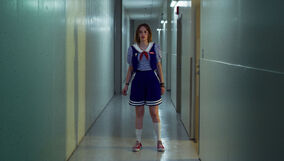 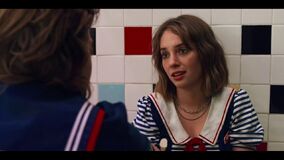 Robin reveals her sexuality to Steve. 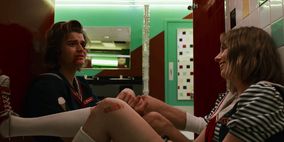 Robin happy that Steve accepts her sexuality, and considers her a friend. 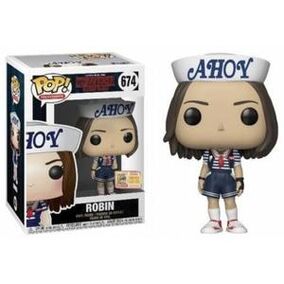 Robin meeting the rest of the Hawkins Gang

Robin learning about the Upside Down.

Retrieved from "https://hero.fandom.com/wiki/Robin_Buckley?oldid=1997105"
Community content is available under CC-BY-SA unless otherwise noted.