Taking down his enemies

Serve the Public Trust
Protect the Innocent
Uphold the Law

RoboCop is a cybernetic law enforcement officer and the star of the 1987 film series, comics and several television series.

He was played by Peter Weller in the first two films, and by Robert John Burke in the third film.

Robocop was formerly Alex Murphy, a Detroit police officer in the near future. Recently transferred to the Metro West precinct and partnered with Anne Lewis, Murphy engaged in a high-speed chase and cornered a group of drug dealers led by Detroit crime boss Clarence Boddicker. Following the group into an abandoned steel mill, Murphy was caught, tortured and brutally executed by Boddicker and his gang.

Murphy was rushed to the operating table, where he was declared dead; however, mega-corporation Omni Consumer Products (OCP), which had recently taken over operation of Detroit's law enforcement, had other plans for him. Bob Morton, an executive in the Security Concepts division, used Murphy for his Robocop program. Combining state-of-the-art technology, armor and weaponry, OCP merged Murphy's mind with machinery to create Robocop, the crime-fighting cyborg.

OCP programmed Robocop with three prime directives: serve the public trust, protect the innocent, and uphold the law. A fourth, unknown directive remained hidden in his programming. At first, Robocop cleaned up crime in Detroit and had citizens cheering and criminals on the run. Before long, however, Alex Murphy's memories began to haunt the cyborg. Searching for clues to his past, Robocop rediscovered memories of his happy family life and his murder at the hands of Boddicker's gang. He became determined to get vengeance for his own murder.

Robocop tracked down Boddicker's henchmen on a quest for Boddicker himself. He soon learned that the corruption extended to Dick Jones, the Vice President of OCP, who was working with Boddicker. While attempting to arrest Jones, Robocop's fourth directive activated and prevented him from taking action against any senior OCP official. Jones attacked Robocop with his own mechanical enforcement droid, the bumbling ED-209. Robocop escapes into the parking complex, however he is then confronted by Detroit Police SWAT team led by Lt. Hedgecock who Robocop helped negotiated the hostage taker Ron Miller who Mayor Gibson and his staff hostage earlier has betrayed Detroit Police and taken control of the SWAT to follow Dick Jones' orders to destroy him. Before they open fire a few SWAT team members Kaplan, Jerry, Manson and Ramirez Robocop's comrades protest and tried to stop him and they walk off disgusted after Lt. Hedgecock tells them they have orders to destroy him.

With the help of Murphy's old partner, Lewis who was alerted by Kaplan and the others to Lt. Hedgecock's treachery arrives to save him, Robocop escaped capture and returned to the steel mill where Murphy had first encountered Boddicker's gang. Jones ordered Boddicker to destroy Robocop and a climactic showdown ensued. One by one, Robocop and Lewis took out Boddicker's thugs and ultimately, Boddicker himself. Robocop then returned to OCP and, after a hostage standoff, was able to kill Jones when the senior OCP executive fired him and his orders on the Detroit Police force to destroy Robocop is put to an end.

Soon afterward, Robocop and Lewis were among the last few police officers working in Detroit as a major police strike ensued and the SWAT team suspended for falling into Dick Jones' trick and Whitakker is the new SWAT leader replacing Lt. Hedgecock who is now been killed for following DIck Jones' orders to destroy Robocop and his betrayel. The absence of police combined with the presence of a new, highly addictive drug called Nuke made the streets of Detroit more dangerous than ever. Robocop pursued the Nuke drug lord Cain to an abandoned factory, but Cain and his henchmen captured and dismantled him.

Reduced to a collection of parts in a lab, Robocop's future was in doubt as OCP focused instead on developing an improved "Robocop 2." An ambitious company psychologist, Dr. Juliette Faxx, took advantage of the situation to reprogram Robocop with hundreds of nonsensical directives. With his psyche strained to the breaking point, Robocop deliberately subjected himself to a massive electric shock. He was able to clear all of the directives from his programming, giving him more free will than ever before.

Robocop recruited the striking police officers of Detroit and staged a massive raid on Cain's drug operation. Robocop captured Cain in the ensuing chase. Dr. Faxx, meanwhile, had decided that Cain's criminal mind would be the best subject for her Robocop 2 project, and murdered him in his hospital bed in order to extract his brain. Unleashed on the city to do OCP's bidding and controlled by his addiction to Nuke, this new Robo-Cain soon clashed with the original Robocop in a battle at OCP headquarters.

Robocop was able to defeat Cain, but OCP began the process of forcibly removing Detroit citizens from their homes to pave the way for its ambitious Delta City project. Caught in a moral dilemma and no longer able to reconcile OCP's actions with his own directives, Robocop, along with his partner, Lewis, turned against the corporation and joined an underground resistance movement. OCP's "rehab" officers subsequently murdered Lewis and forced Robocop into hiding.

The resistance fighters took Robocop in and recruited his OCP technician, Dr. Marie Lazarus, to repair him after the scuffle with the rehab officers. While recovering, Robocop befriended Nikko, a young girl whose parents had recently been killed by the rehabs. Seeking revenge for Lewis's death, Robocop tracked down the rehabs' commanding officer, Paul McDaggett, but was unable to catch him.

OCP, meanwhile, sent Otomo, an agent of its Japanese partner corporation, after Robocop. Robocop squared off against Otomo while the resistance members and former police officers fought the rehab officers in the streets of Detroit. Robocop was able to defeat Otomo, aid the resistance members using his new rocket pack, and rescue Nikko and Dr. Lazarus from McDaggett. With OCP's plans in ruins, Robocop stood at the forefront of the grass roots effort to rebuild Detroit.

Since Alex Murphy's "resurrection" as Robocop, the struggling influences of man and machine that comprise the cyborg have presented his greatest challenge. Haunted by memories of his family and the knowledge of what it was like to touch and love others, Robocop also knows that he can never be human again. However, through his experiences, he has learned to regain as much of his humanity as possible.

Anne Lewis, Alex Murphy's former partner, was the first to reach out to Robocop. She recognized him as Murphy and was the first to begin referring to him as such. Her compassion led her to rescue Robocop when Dick Jones ordered his termination. After taking down Jones and Boddicker together, Robocop and Lewis became partners at Metro West, just as they had been before Murphy's death.

Robocop was never able to reestablish a connection with his wife and child, and losing them was perhaps his most painful experience. In addition to the mixed emotions Robocop faced, his "owners" at OCP were also concerned about the legal implications of their "product" seeking a relationship with private citizens under its own volition. Robocop ultimately decided that the only way to allow his former wife to grieve and move on was to make her believe that Murphy was truly dead, and Robocop himself just an emotionless machine.

In addition to Lewis, other associates came to befriend Robocop and treat him as a person rather than just a machine. Sergeant Reed, the head of Detroit's Metro West precinct and Robocop's commanding officer in the police department, treated him like one of the team and, along with most other Metro West officers, knew Robocop as "Murphy." In his time at the precinct, Robocop came to earn the respect and admiration of his fellow officers for his service. They ultimately followed his lead in giving up the police strike to wage war against Cain, and later, to quit OCP and join the resistance movement.

When Robocop joined the civilian resistance, he gained a little more of his humanity back by befriending Nikko, the orphaned girl who served as the group's computer whiz. Triggering memories of his own child, Robocop's time with Nikko allowed him to feel a sense of belonging after Lewis's death and provided Nikko with a parent figure after the death of her father and mother. He also had a good friend in his technician, Dr. Marie Lazarus, who treated Robocop as a patient rather than a piece of machinery.

Ironically, it is Robocop's humanity that continues to prove the strongest weapon in his arsenal. Despite repeated attempts by OCP to restrain their creation with directives, Murphy's sense of honor and duty remain the driving forces that compel Robocop to serve the public trust, protect the innocent, and uphold the law.

After being murdered by brutal criminals, Officer Alex Murphy's flesh and brain was used to create the cyborg, Robocop. As the law enforcer, Murphy was bound by a sense of justice and constantly followed the three directives hardwired into his mind but it's also revealed he had no choice in the matter. Murphy has shown to be relentless when it comes to other criminals, and hasn't a qualm when it comes to killing them however he will only attack if he is provoked.

However unbeknownst to OmniCorp Consumers who all believed that Robocop was fully machine Alex Murphy was still inside that shell. He was clearly traumatised by his death and memory of his past life, he was known to have nightmares reminiscing about what he has lost; being remorselessly gunned down by Clarence Boddicker and his thugs, losing his wife and his child after being transformed into Robocop and being forced to remember his partner, Anne Lewis dying before his eyes. Although many people believe that Robocop is stronger, it's normally proved that Alex Murphy is what prevails, as its humanity, morality and sense of morality that protects the people of Delfa City.

Robocop occasionally proves that he is not bound by his directives as people would imagine him to be. He was capable of acting by himself even if it wasn't the most logical choice. Examples are when he disobeyed his superiors to help Lewis when she was being held down by thugs and later disobeying Paul McDaggett when he was prepared to destroy a church full of innocent people. 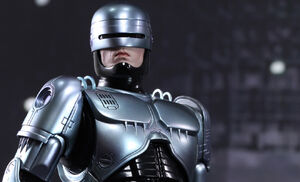 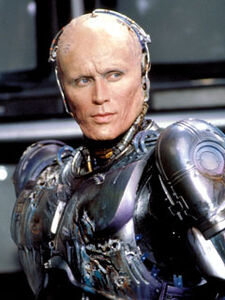 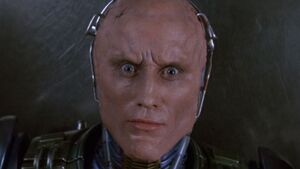 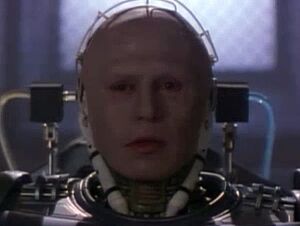 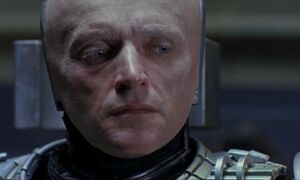 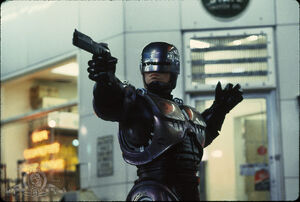 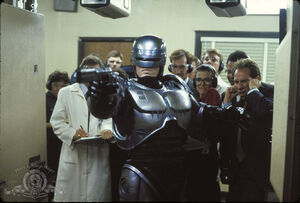 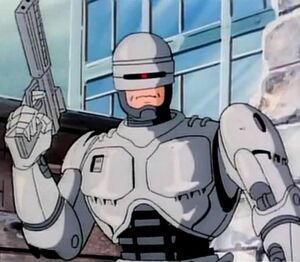 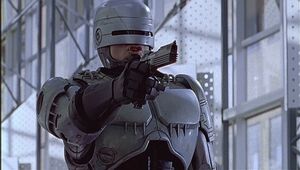 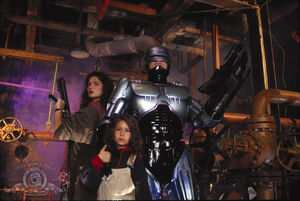 Robocop with Lazarus and Nikko 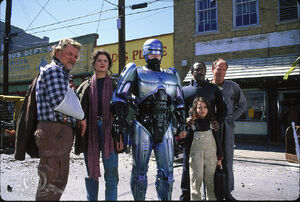 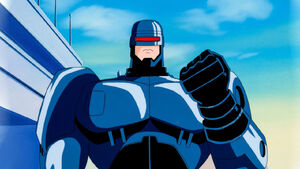 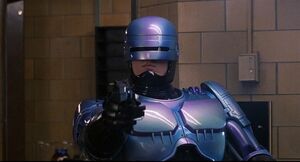 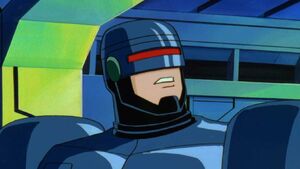 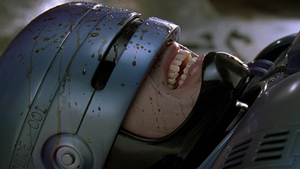 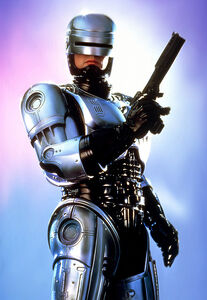 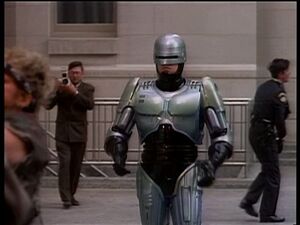 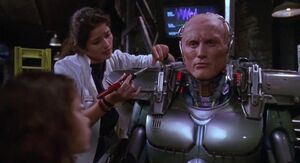 Retrieved from "https://hero.fandom.com/wiki/RoboCop?oldid=1704447"
Community content is available under CC-BY-SA unless otherwise noted.