Robotboy is the titular protagonist of the show of the same name. He is the latest creation of the world renowned scientist Professor Moshimo. Due to fears that Robotboy would be stolen by his arch-enemy Dr. Kamikazi and his main henchman Constantine to be used to take over the world, Professor Moshimo entrusts Robotboy to 10-year-old Tommy Turnbull, his biggest fan. While being protected by Tommy and his two friends Lola Mbola and Gus Turner, or "G-man" as he calls himself, Robotboy learns how to behave and act as if he were a real boy.

He was voiced by Laurence Bouvard.

Robotboy is a small yet surprisingly powerful robot created by Professor Moshimo with the most advanced fighting capabilities on the planet, and the mind of an 11-year old Japanese exchange student. To keep certain less savory personalities from using him for the wrong purposes, Moshimo sends him to live with Tommy Turnbull, where he learns to become a real boy.

Robotboy was intended by Professor Moshimo to resemble a real boy. He has a round head with blue 'ears'. Most of his body is white, but his hands and feet are blue. He also has luminous, light blue eyes. His eyes turn red when he changes into his super activation mode.

In deactivation mode he is small and resembles a doll. His ears are folded away so only his round head is mainly visible. His eyes are also closed and they remain light blue.

In super activation mode, he is much taller and has long legs. He has a medium-sized, primarily silver instead of white body. His ears, hands, and feet are dark blue. He has a dark blue mask-like face with a red outlining. 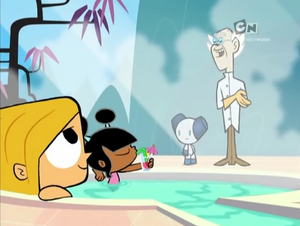 In the jacuzzi in "War and Pieces". 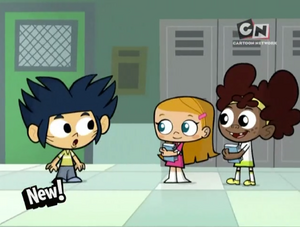 Robotboy as a temporary human boy form in "Tween For a Day". 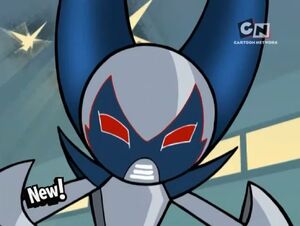