Orfannel (by Aunt Figg)
Kid (referred to by Tom)

To reunite with her father (succeeded).

Robyn Starling is the deuteragonist of Tom and Jerry: The Movie.

She is voiced by Anndi McAfee who also voiced Phoebe Heyerdahl from Hey Arnold!, Cera from The Land Before Time franchise, and Barbie, Princess Odette, Princess Anneliese, Queen Erika, Princess Annika, and Princess Brietta, who had won the Young Artist Award for Best Youth Actress in a Voice-Over Role after this (the only nomination and win for the film).

She was a lost young girl who befriends Tom and Jerry who help her find her father (who is in Tibet) while avoiding their enemies Aunt Pristine Figg, Lickboot the Lawyer, Ferdinand, Dr. Applecheek, Straycatchers, Captain Kiddie and Squawk. Her mother died during Robyn's infancy.

Robyn stepped back to see if anyone is after her

Robyn caught herself in the streets.

Robyn looked back to see Tom and Jerry.

Robyn and Tom and Jerry escaped from Aunt Figg.

Robyn was almost worried after Jerry introduces Tom and himself. 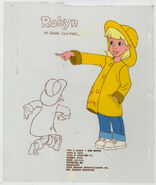 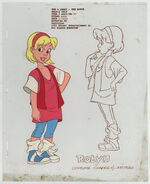