Traveller
Animal
Roc is one of the characters in Xenoblade Chronicles 2. He can grant tremendous power to his Driver Vandham, and his allies. He uses the power of wind. He is an anthropomorphic bird who fights using his powerful breath. His appearance is reminiscent of a cockerel (in-game portrait in particular), or a fowl in general as implied by his Japanese name, a reference to the Vermilion Peafowl.

He was voiced by Takahiro Fujimoto in the Japanese version, and by Todd Kramer in the English version.

Roc was the Blade of Vandham, and he is first fought alongside Vandham after the party escapes the head of Uraya. Vandham and Roc reveal to have no bad intentions, and they take the party back to Garfont Village after the battle. As Vandham and the party go to investigate a large energy buildup near the blowhole, Roc displays his ability to get rid of Ether Miasmas.

When Akhos attacks Garfont Village, Vandham uses Roc's power to create a small tornado and disturb the ether flow in the air, prompting Akhos to retreat. Roc and Vandham then join the party as they venture to Fonsa Myma to meet Cole. When fighting Malos and Akhos at the Olethro Playhouse, Vandham impales himself with Roc's scythes to continue fighting despite Obrona's power. Despite his efforts, Vandham is killed and Roc returns to his Core Crystal.

After the death of Vandham at the Olethro Playhouse in Uraya, Rex carries Roc's Core Crystal|Roc's inactive Core Crystal]]. Later on, in Argentum, Rex and company prepare to travel to Mor Ardain. Rex's bag, with Roc's Core Crystal inside, is stolen by Rhys, and the party pursue him back to Umon's Shipyard. The children planned on using Roc to fight a group of bandits who raided their village. They eventually return the crystal, but as the party pursues the bandits, an Ether Miasma blocks their path. This prompts Rex to re-awaken Roc as his own Blade, and Rex tells Roc more about Vandham. He then joins Rex on his travels to Elysium. 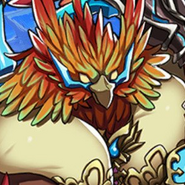 Add a photo to this gallery
Retrieved from "https://hero.fandom.com/wiki/Roc_(Xenoblade_Chronicles)?oldid=2189890"
Community content is available under CC-BY-SA unless otherwise noted.