Heroes Wiki
Register
Don't have an account?
Sign In
Advertisement
in: The King of Fighters Heroes, Male, Honorable,
and 48 more

Get revenge on his father

Rock Howard is the main protagonist in Garou: Mark of the Wolves. He is the product of the evil Geese Howard.

Rock is the son of the most infamous crime lord of Southtown, Geese Howard. Although he knew of his father's existence as a young boy, Rock lived a modest life with his mother in a small apartment. He often wondered about his father and was excited about potentially meeting him someday. When Rock was seven, his mother contracted a mysterious disease and he tried his best to nurse her to health. As her illness worsened, Rock went to Geese Tower and met his father for the first time in his life. Though the boy pleaded for medical aid and told him that Marie desperately wanted to see him, Geese wanted nothing to do with the matter and sent him away. Marie died that same night, and Rock formed a deep grudge against his father ever since.

A year later, Rock met Terry Bogard, who recently settled his personal vendetta against Geese. Rather than hate his father's enemy, Rock felt a mix of loneliness and joy knowing that his father died. Rock decided to follow Terry and attended his street fights. Terry soon became somewhat of a father figure to Rock, and began teaching him martial arts. Rock soon became a formidable fighter, fighting similarly to both Terry and his father, Geese.

About ten years after Geese's death, Second Southtown was established. During this time, The King of Fighters: Maximum Mayhem tournament took place, which Rock joined to find his purpose in life. By the end of the tournament, Rock faced Kain R. Heinlein, who revealed himself as Rock's uncle. After defeating Kain, Rock discovered that the tournament was orchestrated by Kain to bring Rock to him. Kain was aware that Geese Howard's will held presumably valuable secrets but was unable to discover them without assistance. Kain earned Rock's aid in working through the document by offering information regarding Rock's mother, whom Kain claimed was still alive. Terry accepted Rock's decision to become Kain's new partner, as Rock promised to return.

In his development blog for KOF: Maximum Impact 2, Ureshino states that he doesn't know about Rock's mother or the true inheritor of Geese's legacy, but hints that it would most likely conflict with Terry. Rock's scenario in this game explores his personal take on the character's actions in the yet to be released Mark of Wolves sequel.

Rock is a shy man with an inner struggle. Usually as a bit of a gag, he's often nervous around women with the exception of Hotaru Futaba (for being kind and compassionate with him). He is shy with women due to being around men throughout most of his early life as Terry was raising him, though in a more serious case of his insecurities, every day Rock fights off his evil side and tries to get out of the shadow of his father. He is not proud of his heritage and refuses to refer to Geese as his father, stating him to be "that man" or "that person". He is the "middle ground" between Geese's excessive evil and Terry's excessive festive personality. Rock is also very compassionate, offering to help those in need (he offered to help Hotaru find her brother). He is also a childhood friend of Kim Kaphwan's sons, Kim Dong Hwan and Kim Jae Hoon. 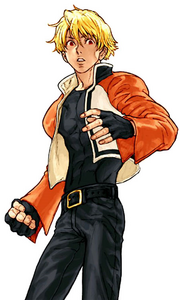 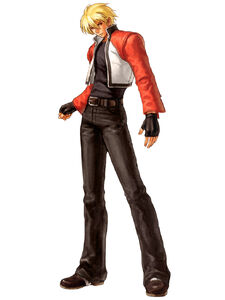 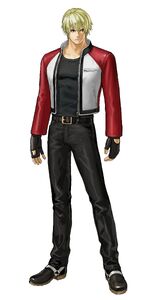